Poppy’s Book of the Month: The Secret Island

Posted on November 10, 2012 by worldofblyton

The Secret Island (the first book in the Secret Series) is a marvellous read, packed with action and adventure. It was the first adventure novel Blyton ever wrote and what a great job of it she made! The story is based on four children who are all very unhappy due to being mistreated by relatives. Jack is an only child and his grandfather wants rid of him, and Mike, Peggy and Nora are all brothers and sisters being mistreated by a horrid aunt and uncle. Their parents were believed to have been killed in a plane crash. They long to run away, so when Jack shows them a secret place he knows of: The Secret Island, the plans begin to hatch. The children finally run away to the Secret Island taking with them all the things they could possibly want. They avoid searchers, and live a happy, adventure packed life until… I’ll leave you to find that out for yourself. I would recommend this book to 7+ boys or girls.

I gave this book a 5 star rating (the best you could possibly get!) because it is such a fun, exciting book, suitable for almost every age and very enjoyable. It even has humour included such as Daisy the cow swimming all the way from the main land to the Secret Island and Jack hiding in a hen house! I loved this book and am raring to read the rest of this magnificent series. 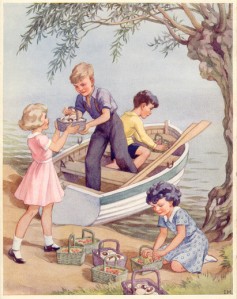 Frontis from the 1st edition, illustrated by E.H. Davie. Taken from ‘The Cave of Books’ at http://www.enidblytonsociety.co.uk

This entry was posted in Book reviews and tagged Poppy's Book of the Month, The Secret Island, The Secret Series, Written by Poppy. Bookmark the permalink.

3 Responses to Poppy’s Book of the Month: The Secret Island