The fourth book in the Malory Towers series sees the girls gearing up to sit their School Certificate (as far as I can work out an equivalent of O Levels and GSCEs). Once more we are treated to a lot of ups and down in the school term not only for Darrell and her friends, but with her young sister Felicity attending Malory Towers for the first time we catch a glimpse into life in the younger forms once more.

We start with the Rivers family leaving their house and driving to the train station where Darrell and Felicity will catch the train to Malory Towers in Cornwall. The  idea is that it will be good for Felicity so she can make friends on the train, but the only friend she seems to make is June, a girl in her form and Alicia John’s cousin. Almost immediately you are not supposed to like June, at least I never felt that she would be a good character. She prises Felicity away from Darrell almost immediately and is really quite an obnoxious child.

Part of June’s hard headedness and encouraging Felicity away from Darrell is because she believes that every older sister is like her cousin Alicia, who wants nothing to do with June. June interprets this as meaning that everyone in the upper forms is like Alicia; however Darrell was very much looking forward to being the one to show Felicity around Malory Towers. In contrast to Darrell, Felicity seems to be a fairly weak character because she lets herself be taken in by June but it is worth remembering that Darrell got taken in by Alicia when she first started.

Once at Malory Towers, we have the usual saga of Irene’s health certificate and where has she left it this time! At the same time we are treated to the introduction of two new girls, the Baton Twins, Ruth and Connie. The girls are disappointed that the twins are not identical because if they had been they could have played a few tricks on the mistresses.

The other new girl is one that Gwendoline Mary Lacey looks forward to meeting. The Honourable Clarissa Carter arrives the next day and dear old Gwen decides to be nice to her because she thinks that Clarissa will be the grand friend she has always wanted at Malory Towers!

The first big excitement for the Upper Fourth is who will be head girl is for the term. To everyone’s surprise, including her own, Darrell Rivers is made head girl of the Upper Fourth! It really is a moment of pride for the reader as well as Darrell because you truly feel that she deserves it and that you’re proud of her for getting that all important role at least once in her school life. However, things start getting a little tricky for Darrell as this is the book that I like to think of as ‘the Glint book’. Alicia is the first one to focus in on Darrell’s glint when she tells Betty off for interrupting the North Tower Girls’ prep. This glint is supposed to be something that happens to Darrell when she gets angry but this is the only book we see it.  It works in a way because it’s supposed to be used as a mechanism for Alicia and the others to wind Darrell up about her temper.

Each chapter in Upper Fourth includes a little event that culminates in the spectacular way that Darrell ends up losing her temper. I shan’t spoil too much for you, but it’s very dramatic. 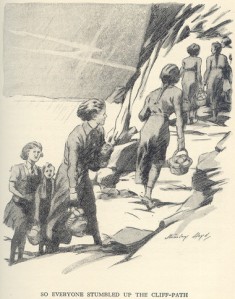 We are also treated to a Malory Tower’s midnight feast at last. The girls decide to have the thrilling meal down by the pool as it was so hot, but before they can get stuck in, the heavens open and they are driven inside, where things become difficult. They hear someone moving around upstairs as someone was taken ill, not to mention Alicia’s cousin June joins the party with Felicity.

After the big midnight feast in where even when it came to owning up, there was no punishment for any of the form except Darrell, we are treated to Gwendoline’s most underhand and nasty trick so far. She gets nervous about the exam and starts to put it about that she thinks she has a weak heart to try and get her taken out of school before the exam. She got the idea from Clarissa, who has a weak heart and which is why she was late on joining the year.

Naturally Gwendoline’s plans don’t wash with everybody, such as Darrell, Sally, Alicia, etc, all those who see through her pretence. However Mary-Lou, Clarissa, Bill and Mam’zelle Dupont all believe in Gwen’s weak heart. At half-term Gwen’s overprotective, silly mother hears of Gwen’s weak heart from Mam’zelle Dupont and Gwen is immediately taken home. A week later however, she is back in school with nothing wrong with her heart. Unfortunately the doctor has ordered Gwen to take part in a strict exercise regime to help ‘get her fat off’. Gwendoline hasn’t prepared for the exam either, so we assume she fails the School Cert.

During the School Cert Alicia develops measles and faints during the last exam. She  has not been feeling well all week and wonders if she is being punished because she is always so quick to learn and doesn’t really have to try at work. This is a comeuppance for her in a way, because of her attitude towards Darrell this term, her horridness to Sally in the second form, and her gloating over the work. Alicia starts off her recovery by realising that she needs to change her ways.

We near the end of the book with a big mystery. Who is stealing and damaging Connie’s things? Darrell takes it upon herself to find out with interesting consequences.

The term is rounded off with a magnificent trick on poor old Mam’zelle who always seems to be the target for ‘treeks’. Poor old Mam’zelle. Still this trick has to be one of my favourites because its so simple and engaging!

Overall I had forgotten how packed to the brim with little episodes Upper Fourth was, and my second edition is a rather slim volume and looks sad and thin against the other five novels. It is a brilliant read, and you can feel yourself once more going on a journey with Darrell through this term.

Altogether a brilliant read, and full of fun. Like with all the other Malory Towers books, I thoroughly recommend it!

Next review: In the Fifth at Malory Towers

Or read a review of the audio adaptation of Upper Fourth here.

This entry was posted in Book reviews and tagged Malory Towers, Upper Fourth at Malory Towers. Bookmark the permalink.