Five on a Treasure Island – How has Blyton’s original text fared in a modern edition?

Something that comes up again and again in discussions about Blyton’s books is the issue of updating. Some readers say that word as if it were a dirty thing, others say it positively. I’m in between really, I prefer to read the original text myself – I like to know what I’m reading exactly what Blyton wanted me to. Though I do understand that for the books to stay in circulation some changes are probably necessary.

I have a 1965 (17th impression) of Five on a Treasure Island, and a 1997 paperback edition (which happened to come with the 50s Children’s Film Foundation 1957 DVD), and I’m going to compare them a few chapters at a time to see just what changes have been made (or not been made as the case may be). It’s not an exhaustive list by any means as different editions by different publishers along the years may have had different alterations made but it will hopefully be interesting. As will reading two copies at the same time, I’m sure. 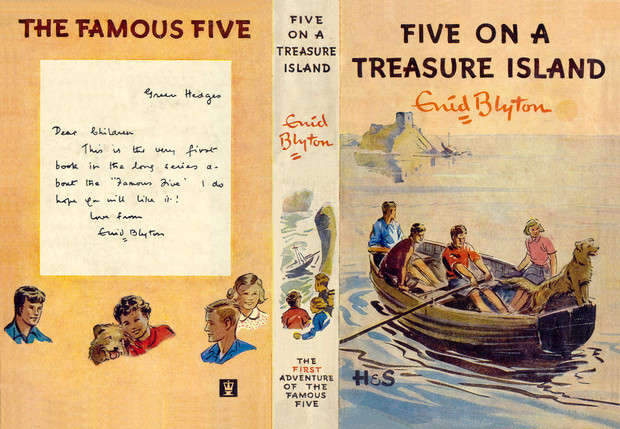 CHAPTER ONE: A GREAT SURPRISE

Well, I’m pleased to note that Mother and Daddy haven’t become Mum and Dad, and there are still plenty of quaint expressions like telephone to, but I managed to find five alterations in the opening chapter.

Firstly, in the original Daddy is heard putting the call through, whereas in the modern edition, he is simply heard dialling. In a way, it makes sense, as how many modern children know about the old system of operators to put calls through? At the same time, it would be a perfect time for them to learn about something like that if they happened to ask about the unusual phrasing. Or of course, they might just read it without really noticing anything, especially alongside the very old fashioned telephone to.

Then we’ve got the updating of the clothes. Mother says they can pack bathing suits and jerseys and shorts in the original, but in the nineties it has become and jeans. A few lines later, Anne says how lovely it will be to wear shorts again, or indeed, jeans.  Modern children might well find jeans a relatable sartorial choice, I certainly wore jeans in the nineties, but I’m not sure replacing shorts with jeans is necessary. I bet even kids today still wear shorts in the summer. On that fashion-related note, I would say swimming costume, or swimsuit was a more modern term than bathing suit, but that may vary around the country I suppose.

A change I suspected is there, the reference to golliwogs is removed. Originally, their mother teases  Dick about the time he put aside  two golliwogs, one teddy bear, three toy dogs, two toy cats and his old monkey to take to Polseath, now the list starts with the teddy.

And finally, the rather odd expression luggage-hole has been changed to boot (which I suppose is better than trunk!) The sentence has been changed too, originally it was we can pile everything into the luggage-hole at the back then, but in the paperback Daddy just says we can pile everything into the boot. Perhaps they felt at the back was unnecessary, as the majority of modern cars are front wheel drives with the boot at the back, but I’m not sure why the word then was cut.

Interestingly, both editions refer to the luggage-place in the car at another point which seems inconsistent in terms of updating.

Again, an obvious and expected change is made here, where Uncle Quentin once said She [George] wants spanking, he now says wants a good talking to. Unfortunately it makes the next lines, where the visiting siblings wonder whether he’s joking or not, make rather less sense.

There are a few cases of words being altered too, the old-fashioned to-morrow becomes plain old tomorrow, and likewise good-night becomes good night. I know every publisher has its own style manual to deal with those sorts of things (to hyphenate or not to hyphenate, that is the question is probably a chapter somewhere) but it does seem odd when good-bye still has a hyphen as does the previously mentioned luggage-place, as well as fisher-boy and boy-cousins.

Later in this chapter there are copious more examples of hyphenated words that survived in the modern edition, but I won’t bore you with them.

Anyway, grammatical niggles aside for the moment, another minor change is made to the description of the car journey. Originally they were tired because of their long drive in the open air, implying a soft-topped car perhaps? But the modern edition simple reads their long drive. I suppose convertible cars are not so common these days, or would sound too flashy?

In what I’m sure will be mentioned repeatedly, given Blyton’s fondness for the word, queer has been removed. The first instance in the book; Anne speaking about George, becomes odd. In the second instance, Anne talking about George again, queer is changed to funny.

Shorts are jeans again, Anne putting on grey ones instead of grey shorts, and George puts on jeans too. Again, if they’re going down to the beach wouldn’t shorts, even jean shorts (or should that be jean-shorts?) be more sensible?

And that’s the end of the first two chapters. Not loads of changes, but a decent number (twelve edits altogether so far, in case you didn’t keep count). There’s enough quaintness left, I think, for much of Blyton’s original style to still be there, but I find some of the changes petty and a little pedantic. The first two chapters are full of oughts, shan’ts, shalls, the odd gracious! and plenty of other 1950s phrases which rather stand out today, which is a plus. Importantly Aunt Fanny is still Aunt Fanny (none of that Frances nonsense from the TV, phew!)

One other thing going for it, is this edition has the lovely Soper illustration on the front, and inside too (though perhaps not all of them.) The endpapers illustrations of Kirrin Island is missing, as is the frontispiece one of Anne facing off against the cow.

The 1997 paperback, with the  (slightly cropped) illustration from the first edition

There are seventeen chapters in total, so depending on how many alterations there are, I may end up doing another seven or so blogs on the subject (that’ll keep me going for a while!) Please do tell me what your opinion of the modern updates are, whether you’re a decrier of the pc-brigade or if you welcome the changes.

This entry was posted in Updating Blyton's Books and tagged Five on a Treasure Island, The Famous Five, Updates. Bookmark the permalink.

8 Responses to Five on a Treasure Island – How has Blyton’s original text fared in a modern edition?