If you like Blyton: Dead Man’s Cove by Lauren St John 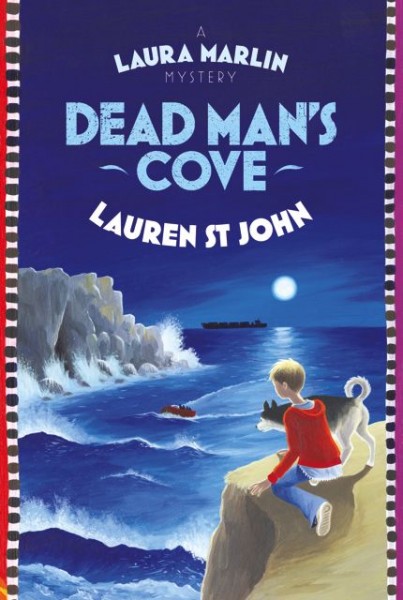 I swear I had been planning to review this book a while ago, and by a while, I mean almost two years ago! I certainly have read it before, but I think I just never got around to it.

It doesn’t matter anyway, because I’m going to do it now. So, working in a library gives me the scope of finding these children’s gem’s without necessarily paying to get my own copy. This comes in handy when you’re just not sure how much you’re going to enjoy the book you’re thinking of reading.

In fact, just generally I need to be better all together and remember to check at work for a book before I buy it, but I digress.

Lauren St John is a fantastic children’s author and writes a huge breadth of material, appealing to all children and age groups. The Laura Marlin Mysteries is a series that was born in 2010 and won the title “Favourite Story” in the Blue Peter Book Awards 2011. Now if that’s not a recommendation enough, on the front cover there is a quote from a review from The Times which says “Dead Man’s Cove will delight fans of Enid Blyton.” That was what caught my attention the first time around and I brought it home, read it and clearly forgot to blog about it. How silly of me! Let’s get on then and have a look at the story and characters involved.

Laura Marlin is an eleven year old orphan; her mother died when she was born, and she never knew who her father was – it’s hinted at him being an American soldier who is not likely to know that Laura even exists.  We join Laura on the morning of her moving out of her orphanage to go and live with a long lost uncle who has agreed to adopt her. She gets driven down to St Ives in Cornwall to meet her uncle, Calvin Redfern. He is a bit of a mystery and claims to work for the fishery department keeping an eye out for people bringing in too many fish over their quota, but as you’d expect it doesn’t quite work out that way.  You’re left guessing as to what exactly Calvin is doing for a job and even at one point if he is the baddie in the story, but that’s all part of the classic children’s mysteries that Blyton gave us.

St John gives us plenty of characters in Dead Man’s Cove to keep us guessing as to the actual bad guys. You’re lead to believe that it could be Laura’s Uncle Calvin, the sulky housekeeper Mrs Webb (who reminds me of Mrs Stick in Five Run Away Together,  as in she can cook exceptionally well but has the blackest of moods and is generally very grumpy), and then there are the Mukhtars who run the local store in St Ives.

The Mukhtars are supposed to be the parents of the only friend Laura makes in St Ives when she arrives, Tariq but thanks to the village gossip, Mrs Crabtree, Laura finds out that Tariq is probably adopted and may really be their nephew. Laura also believes quite strongly that they are abusing Tariq and there is something under the apparently innocent facade that is putting her friend in danger. However before she can delve deeper into that situation, Tariq supposedly changes his mind about being friends with Laura and asks his ‘uncle’ to get rid of her for him. Now we’re heart broken for Laura who really needed Tariq’s friendship. After this, secret messages start appearing for Laura and we begin to get embroiled in this massive adventure around the corner.

Without giving everything away I can’t say much more, but all you need to know, World of Blyton readers, is that you need to read this book. It’s a little more modern than I would usually recommend but oh boy, The Times was right, Dead Man’s Cove WILL delight fans of Blyton. You have the absent parents/guardians, a self sufficient heroine, the loyal sidekick in the form of her adopted dog Skye, and plenty of twists and turns. You will never guess the ending and to be honest, given the time between reads I had forgotten what the ultimate ending was. I am tempted now to go and find the second book and carry on reading about Laura and what she gets up to. Just like I did with Helen Moss’ Adventure Island series I now own the whole set and was lucky enough to find most of them in a charity shop in Alton when out with a friend once. Will I be adding Laura Marlin to the collection? I think its a very high possibility.  Please do check it out and let me know what you think!

1 Response to If you like Blyton: Dead Man’s Cove by Lauren St John