If you like Blyton: The Secret of Cliff Castle by Mary Pollock

I think it is safe to say that if you like Blyton, then you will also like Mary Pollock.

When she’s writing under the pseudonym Mary Pollock. But then you already knew that, didn’t you? 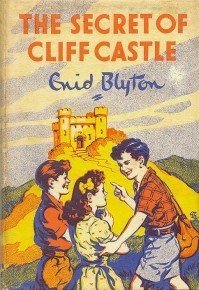 I’m not certain that a true consensus has been reached as to why Enid Blyton chose to publish six books* under that name, but there are a few good hypothesis out there.

One is that it was to get around war-time paper rations, which was obviously a problem at the time. However she was using many different publishers at the time and churning out books as it was.

Another is that she was trying out some different genres and story types – the fact that three were published in 1940 and three more in 1943 suggests they were perhaps written in 1940 or before then published later – also she wasn’t Mrs Pollock by 1943.

The one I like, which perhaps works along with the one above, is that she was trying to establish how well her stories would sell if they didn’t have the famous Blyton name on them.

AN ADVENTURE IN UNDER 100 PAGES

Obviously different editions will vary but the one I have – reissued with the Blyton name on it – the story is only 92 pages (It is stretched to 128 in some newer paperbacks I believe). All the Mary Pollock books are short, probably aimed at the younger readers, and this perhaps backs up the ‘testing the waters’ theories above.

Being so short, the book has an extremely fast pace with no time (or pages) ‘wasted’ on chatter or inconsequential events. Travel between places and things done that don’t relate to the castle are briefly mentioned and not described so that we can focus on the castle and its secret.

Nothing is truly omitted though, despite the shortness of the book. There is a charming but brief train journey to start, with the children (Peter and Pam) arriving in Rockhurst by page 11, where we also meet their cousin Brock.

Cliff Castle has already been spotted from the window on page 13, and we get the usual backstory of the ‘queer old man’ building it, too. By page 19 they are having their first visit to the castle, having already explored Brock’s house and garden and had the obligatory warnings about avoiding the castle from the locals. 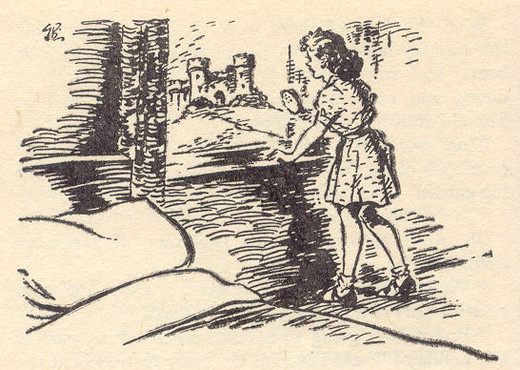 Pages 20-21 have them walking around the outside of the castle, getting stung by nettles and using ‘queer’ at least twice per page, and on page 22 they’re already trying to get into the castle via a tree and a crumbling window. They’re inside on page 25, and have to find an alternative exit on page 30 as they’ve managed to ‘lose’ the window they came in by.

A ‘day or two’ pass in one paragraph while they go off to the seaside and forget about the castle, but their attention is drawn back to it when Pam sees lights in the castle at night.

So the true mystery/adventure starts on page 37 when they discover two men have been inside the castle since their last visit – and have taken a heavy box up to the tower room.

For comparison the Mannering/Trent children haven’t even been up to the castle in The Castle of Adventure by page 37 and the true adventure (discovering someone else in the castle) doesn’t start until page 129, long after The Secret of Cliff Castle is over.

Page 54 – more than half-way through already – and the children have made their third trip to the castle and discovered a secret passage leading down to the bottom of the cliff.

And on page 58 things have really hotted up! Brock has snuck back to close the secret passage only to find the men are on their way up it.

It’s non-stop excitement for the next thirty or so pages, with Brock being captured, rescued, Pam coming to the rescue of both boys, then fetching the police and the boys locking the baddies up for good measure.

The final pages are then concerned with the arrival of the police so everything can be resolved neatly.

IT’S A BLYTON, ALL RIGHT

I don’t think many people would be fooled by the pseudonym on this book, it’s got all the hallmarks of a Blyton adventure. An abandoned castle, a secret passage, swarthy foreign-sounding men in the night, mysterious lights, rusty-bolted doors and hefty policemen.

Some elements are familiar from earlier books, and others get reused later in famous series.

For example, The Secret of Spiggy Holes was published in 1940, and features a very similar secret passage starting in a chimney, and another that runs down a cliff to a cave. Also the name Galli (the head baddie) could be a shortened form of Galliano, of Mr Galliano’s circus (1938).

Then the climbing through a narrow window into a castle, and discovering someone else has been inside is re-used in The Castle of Adventure (1946). The children in that book can’t escape because the plank has been removed – a better excuse than not being able to find the right room, but not all that dissimilar.

Five on a Treasure Island (1942) has Dick shutting the baddies in the room containing the ingots, and struggling with the rusty bolts, just like Brock and Peter with the tower room.

The little door they use to enter the castle is like the one down the well in Five Have a Mystery to Solve (1962), and probably others, too. 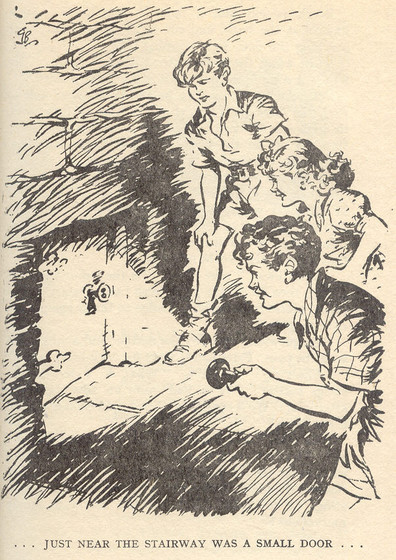 IT’S BLYTON, BUT IT’S NOT PERFECT

While this is a satisfying and fast-paced read there are some drawbacks to its length.

The characters aren’t particularly fleshed out – Brock is the tougher country boy, Peter is a decent older brother who takes care of his sister and Pam is gentle and kind but also plucky enough to tag along despite being ‘just a girl’. And actually that is said at least three times by Brock and Peter, making them sound rather awful. They don’t get enough page-time to really redeem themselves unlike Julian Kirrin or any other boy-character who tries to leave out the girls. Luckily Pam is pretty brave and smart throughout – though she needs help to climb the tree and complains of being scared the first time they’re in the castle.

Blyton’s bad habit of over-using ‘queer’ is particularly prevalent in the book (I don’t have a problem with the word itself but four times in two pages is a lot, especially on top of it being used a few dozen other times).

There are also a few minor issues, like it being too dark to see into the castle but Brock remembering a torch once he is inside. Then there’s the boys making it back up the extremely steep cliff quicker than the men going via the secret passage (no mention of how the boys did it, they simply appear back up by the castle!). And lastly Brock and Peter take their boots off (at different points/places), to avoid making too much noise and yet later (with no mention of them being put back on) a point is made of the hard ground hurting Brock’s feet but not Peter’s.

Saying all that, this is a simple adventure aimed at younger readers and it ticks all the boxes for that. It’s fast, exciting, and just long enough to build up a decent story.

This entry was posted in Book reviews, Other Authors and tagged Mary Pollock, The Secret of Cliff Castle. Bookmark the permalink.

2 Responses to If you like Blyton: The Secret of Cliff Castle by Mary Pollock