A piece of Noddy artwork

The Second Form at St Clare’s is not, as the title suggests, the second book in the St Clare’s series. Rather, it is the fourth. After three books focussing on the first form Pat and Isabel O’Sullivan have finally moved into the second form. There’s a new form mistress and a new drama teacher and, in a plot point that is echoed in Fifth Form at Malory Towers, two girls have been left down from the previous second form. These two, Elsie and Anna, become co-heads of the form and along with new girl Mirabel provide a starting point for arguments and bad feeling. Besides that there’s the usual tricks and jokes from Bobby and Carlotta, midnight feasts, a concert and lacrosse.

Well we’ve had Mr Twiddle, so how about poor old Mrs Twiddle? She’s the one who returns to a disaster in her home most days, and has to pick up the pieces from whatever mess her silly husband has gotten himself into. I feel sorry for her, but then again she’s clearly spent many decades enabling him to be so useless! 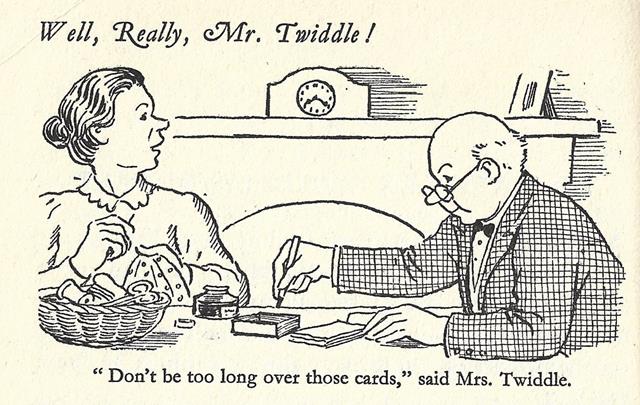