There are six books in the St Clare’s Series (if you don’t include the filler books by Pamela Cox – and I don’t!).

I’ll admit one thing first – I get Stanley Lloyd and W. Lindsay Cable a bit muddled up sometimes. Lloyd did the covers and illustrations for the original Malory Towers editions, while Cable did the original St Clare’s. Most of their covers are quite unalike, but I think their internal illustrations are similar.

Anyway, It’s Cable we’re going to be looking at just now, and I will try not to accidentally write Lloyd.

The six original St Clare’s books were published by Methuen between 1941 and 1945, one a year except for 1944 when there were two (Second Form at St Clare’s and Claudine at St Clare’s).

What’s interesting is how different the first four books are to the last two. The first four are by no means identical, but all are pencil sketches with only a few parts picked out in colour. Then the final two look more like the covers we’ve seen for Malory Towers – full colour, full cover illustrations.

I wonder what prompted the change? 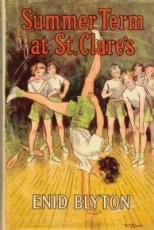 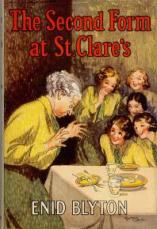 If you were to put the first editions of the last two books alongside the second editions of the first four they look like a complete series, despite three having dark yellow/green colour palettes and the others being more beige with blue/red/green.

Armada must have published hundreds of Enid Blyton titles in the sixties! Yet again they are the first paperback edition for a series.

This time they are a mix of Dorothy Brooks and Mary Gernat. They all have the typical Armada look, though, with bright colours and a real sense of movement and action.

Mary Gernat did books 1, 5 and 6, while Dorothy Brooks did 2, 3 and 4. They are not too dissimilar though Brooks’ characters look a little more modern and slender! 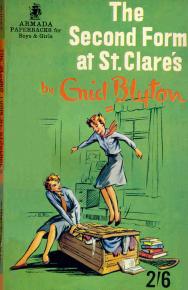 Armada also did a second set in 1988, in a style I don’t recall seeing on any other of Blyton’s books. Each has the illustration contained in a box, but with some of the girls’ belongings arranged outside as if they are bursting out from the world within. 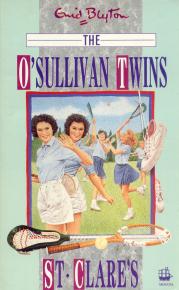 The O’Sullivan Twins at St Clare’s is the only one of the six to have the first part of the title in the larger font and St Clare’s at the bottom.

In another familiar move, there was a 1960s full set of Dragons with their recognizable ‘upside down’ Polaroid style. These were all done by Mary Gernat, with new illustrations. 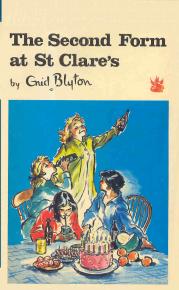 Dragon then reused some of these for their next set. They skipped the first and fourth books, but reissued the second, third, fifth and sixth books with the same Gernat illustration as a full cover in the early 70s. 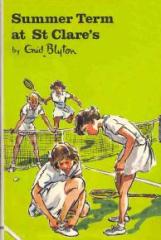 Then in 1972 they did a new upside down polaroid cover with a Paul Wright illustration for the second, fourth and sixth books. How very, very confusing! I can only assume that they were selling out of some titles faster than others, and rights to covers/artwork had run out in the meantime. 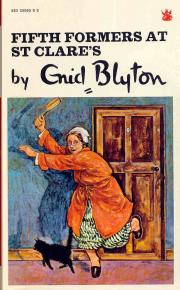 The final set of Dragons came in 1982, with covers by Michael Johnson. I had a couple of these and they did absolutely nothing to encourage me to read the St Clare’s series. The girls all look about 18, and look a bit like air-hostesses at times. That or they’re all French? as the blue, red and white banner at the top has been repeated in their clothing on all but one cover. I had Claudine at St Clare’s which looked so serious, and grown-up that I never read it. The Twins at St Clare’s is a bit better but I was still never moved to open it. 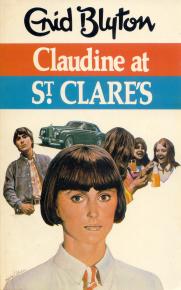 The first Methuen appears to be a one-off, an edition of The Second Form at St Clare’s from 1973, reusing the same Paul Wright cover from the previous year’s Dragon edition. Something about it makes it look like it could be a hardback, that doesn’t make it any less random in my eyes. 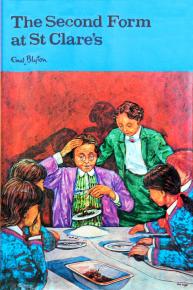 Now, I rarely like covers past the 1950s, though I have a soft spot for the early 60s Armada’s, I suppose. I do like these 1981 Methuen hardbacks by Hilda Offen, though. She did a matching set for Malory Towers the same year. They are all brightly-coloured but retain a nice 1940s look. Saying that, the third book here has edged over to twee. Still, they are amongst some of the better covers for later books. These may be quite rare as the Cave of books only has these three – but the artwork is reused for other editions and you can see that in my next post. 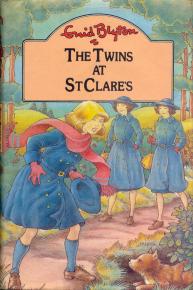 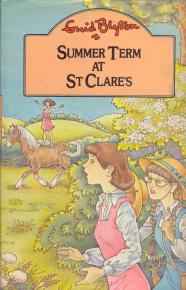 I will stop there for now, and resume with the 90s editions next time. Modern Blytons can have some atrocious covers but there are some modern gems too.