If you like Blyton: The New Bobbsey Twins #1 The Secret of Jungle Park

Posted on October 7, 2020 by worldofblyton

This is a review from Sean, and it contains some spoilers including the identity of the villain.

Now, we are going to start my favourite series of Bobbsey Twins mystery series. As I mentioned earlier, the Bobbseys’ first book came out in 1904 (before Blyton, and even before the Hardy Boys and Nancy Drew!) Those were chapter books with (usually) non-mystery adventures. In 1980, Wanderer books started a 2nd series of Bobbsey Books which were in the flavour of Hardy Boys/Nancy Drew. They were still kind of old-fashioned (indeed, 3 of the series were re-writes of a series made in the 1960s), but were a step in the right direction. However, the third series (called The New Bobbsey Twins) jumped into the 1980s (which was then contemporary times) with both feet!  Older twins Nan and Bert were in a rock band, and Freddie (the youngest boy) even had a computer! Mrs Bobbsey worked part-time, and whilst Mr Bobbsey still owned his lumberyard, Dinah and Sam Johnson were no longer their Black live-in servants. Instead, Sam was the foreman at the yard, and Dinah was his wife (and they owned their own home). Ok, enough backstory-on with the review of Book #1! 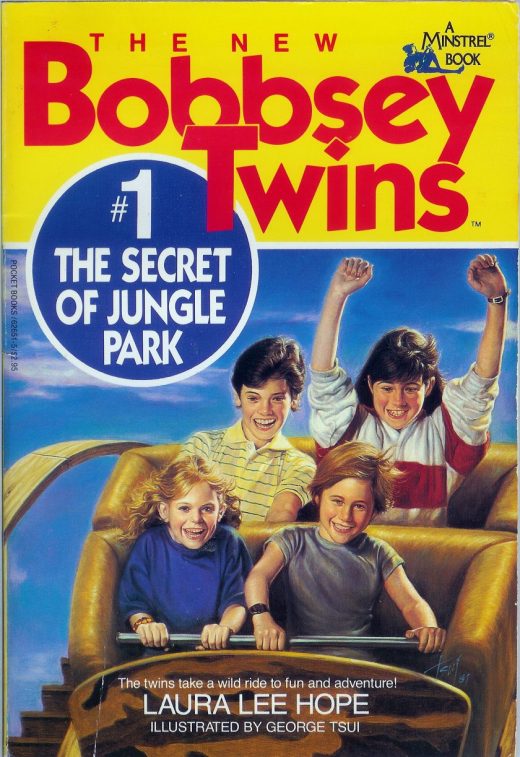 The book opens with Nan being helped with her makeup for a rock band she is in by her younger sister Flossie. We are right away introduced to town bully and general bad guy Danny Rugg, who is in a rival rock band. A local amusement park (named Jungle Park) is hosting a battle of the bands contest where youths compete with their rock bands for a prize.

Before things can really begin, there is an emergency which panics the crowd of spectators. It is shown that the emergency was a prank – a smoke bomb – but the police treat the matter seriously. Lieutenant Pike of the police force (he was first introduced in the latter few Wanderer titles, and is a friend of the Bobbseys, but sometimes gets exasperated that they butt in on cases) knows that it’s no joke when a crowd is panicked. The Bobbseys ask him if they can investigate afterwards, and he grudgingly agrees. The contest goes on, and the Bobbseys’ band (the Aliens) tie for first place with Danny Rugg’s band (the Skulls). Both will play again in an elimination heat at a later date.

The Bobbseys do their thing and search for clues afterwards finding an eye patch and a swizzle stick (I always thought this was a bendable straw, or maybe a coffee cup stirrer. If anyone has any other ideas, please tell me.)

The eye patch might be Danny’s (his pirate band gear has one). Bert thinks that with Danny’s history, he’s the likely prankster. Freddie has more confidence in the clue of the swizzle stick. It has the logo for the Sunset Grill on it. Fortunately for him, the Bobbsey family goes out to eat once a week, and it’s his turn to pick the restaurant. Sunset Grill it is!

This place turns out to be a cheap one-star dive where the food is all but inedible. But Freddie and Nan are able to eavesdrop at the door of an office where a deep-voiced man is growling on the phone “The problem is Tiny!”

The next morning, the Bobbseys hear a radio report of strange accidents happening at Jungle Park. Simon Harris-co-owner (who also owns restaurants and real estate all over town) is interviewed. Freddie recognises the voice as the deep-voiced man at Sunset Grill, and Nan and the younger twins go to investigate.

When they get there, they find Lieutenant Pike also doing an investigation. They sweet talk their way into joining him as he interviews some of the employees. First, is co-owner Mr. Loomis. He mentions that his partner Mr. Harris and he are upset that business is slow because of the accidents and strange happenings. Mr. Harris is even hiring a fix-it man from his own pocket to save expenses. He’s a redhead with an eye patch! (Dum, dum, dum!)

Next they speak to the animal trainer, Beverly Baku. She’s kind of a hippie black woman. She manages to annoy Lt. Pike, and the Bobbseys decide to take their leave (Lt. Pike only tolerated them being there by a narrow margin, and they feel that if he’s annoyed, they don’t want to upset the apple cart).

At home, they meet up with Bert who was tailing Danny put didn’t find out anything. The older twins decide to search the park after hours. They don’t get far because someone let the animals loose and they almost get trampled by a stampeding elephant! Shaken from their narrow escape, they beat a hasty retreat back home.

The next day, the kids go to Jungle Park to rehearse with the rest of the Aliens. After this, they break away to do more detecting. It seems Beverly Baku left town suddenly, and as the twins talk to Mr. Loomis, the eye patched fix-it man comes into the office and is frightening.

Mr. Loomis gives the handyman instructions and he leaves. After this, he chats with the twins for a bit, mentioning such things as how ironic it is that a big man like him has the nickname of “Tiny”, and then offers to let them ride a roller coaster for free.

The coaster ride is fun, and they even see Mr. Eye patch waving at them from the ground far below, but then terror strikes! During the ride, the cars come loose! Realising something has gone wrong, Mr. Loomis is able to shut down the ride before the kids get hurt. 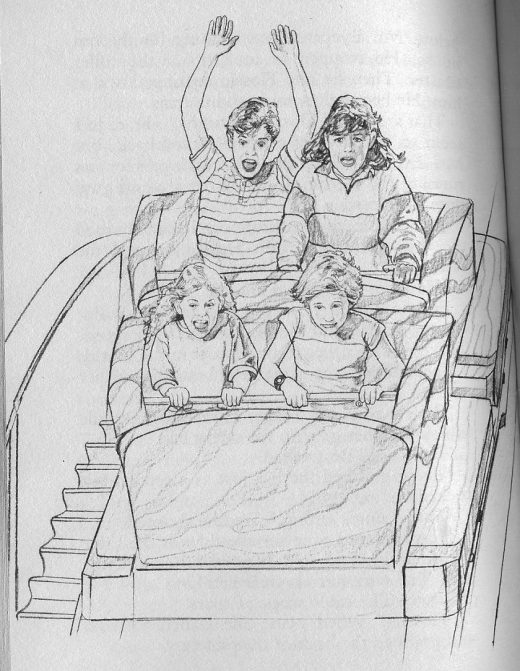 When they recover from their shock, the twins determine that the coaster cars were sabotaged – this was no accident! Since the handyman supposedly worked on the roller coaster, the twins and Mr Loomis search for him. He was seen heading to the fun house, so they go there, only to find a redhead wig and an eye patch. It was a disguise!

Brainstorming back home, they realise that Mr. Harris was saying that Mr. Loomis (aka “Tiny”) was the problem on the phone, not the size of the issue.

Next day, the twins follow Mr. Harris and see him talking to members of a construction company. Mr. Bobbsey owns a lumberyard, and he later explained that Peabody construction wants to build a mall where the amusement park stands. The twins figure out that Mr. Harris wants to sell it, but Mr Loomis/Tiny won’t agree. As co-owners, they both need to sign off on it, so “the problem is Tiny”. Nan sketches Mr. Harris, and then adds a red wig and eye patch. It’s the handyman! They’re one and the same person!

Now, the twins call Lt. Pike, who lets them ride in the police car for the final showdown. They find a man in a gorilla suit (who blends in since the park has many people in costume), but wait! He’s jimming the lights! After a funny chase, they capture the gorilla, aka the redhead handyman, aka Mr. Harris. 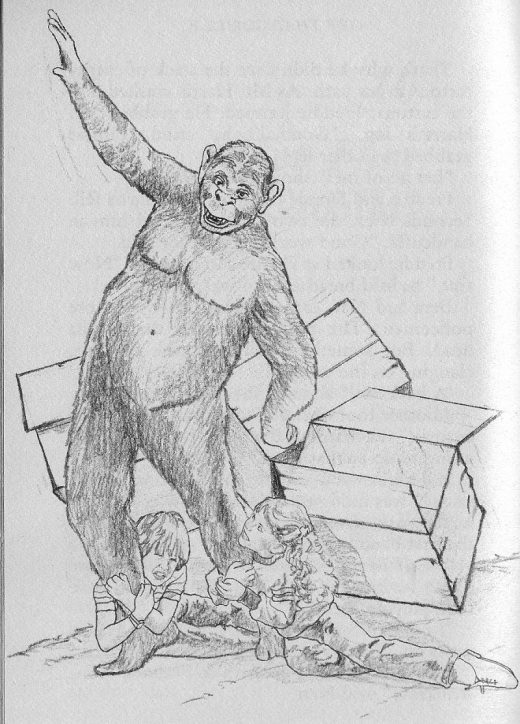 And the final band competition? Despite a dirty trick, Danny Rugg tried to pull, the Aliens win! A nice wrap up to the case!

My thoughts: What can I say? I loved these books as a tween (this came out in ’87 making me about 11 or 12 years old), and they still hold a place in my heart. Maybe some of that is nostalgia, but I really think the adventure is just right for young kids, and would recommend this to any parent with young children.

Every detective has a policeman who has a love-hate relationship with them all the way down from Sherlock Holmes and Inspector Lestrade. Lt. Pike is such a policeman for our young detectives. But despite a bit of gruffness, he is kind, and really does value the twins’ thoughts as can be seen by the way he does allow them to tag along.

Each book has about 10 illustrations in them. (Here’s a little secret I love the books so much that a few years ago, I bought prints of the pictures used by the artist as a basis for his artwork! As a photographer, I find these especially interesting) These illustrations were by George Tsui in the first few books, and then by Paul Jennis until book #18. This along with the “ghostwriters” for the first half of the series marked the heyday of the series for me. Book #1 is 5 stars in my opinion, and the series has new life breathed into it!

Having introduced us to this new Bobbsey series Sean is then going to review his top five books from the series for us (there are 30 books in total).

This entry was posted in Book reviews and tagged If you like Blyton, Laura Lee Hope, The Bobbsey Twins, The Secret of Jungle Park, The Stratemeyer Syndicate, Written by Sean. Bookmark the permalink.

1 Response to If you like Blyton: The New Bobbsey Twins #1 The Secret of Jungle Park