Some time ago I had an email asking if I would give permission for a photo of Elfin Cottage to appear in a new book about Enid Blyton. After checking with Stef who had taken the photo, I replied saying yes, they could use the photo and I’d love to read the book when it was published.

Fast forward to earlier this year and I got another email, this time with a link to download a digital copy of the now-finished book. That book is Enid Blyton: The Untold Story by Brian Carter.

I now also have a physical copy of the book, both that and the digital edition having been given to me free of charge in exchange for a review. As always my review will be completely honest.

What Enid Blyton: The Untold Story is not

Although the title is accurate, it could be misconstrued if you are used to the sorts of things that are written about Blyton these days. This book is not a salacious account of her life. It does not drag out tired accusations of naked tennis and lesbian affairs. Thanks goodness! There’s more than enough of that nonsense out there.

What The Untold Story actually is

As the title says, this is an untold story. While perhaps many of the bare facts are available out there especially now that so much information is online, I don’t believe that anyone has taken that information, analysed it and turned it into a readable account before.

It’s hard to describe this book in a snappy sentence or two, so here I will quote from Brian Carter’s website:

This new biography of Enid Blyton will open your eyes to little known facts about her professional life that have never been fully revealed before.
You’ll be thrilled when you discover how she used her little known artistic and literary endowments and her amazing photographic memory in her work as a professional storyteller and universal teacher.
More than this, you’ll see that, apart from writing over seven hundred storybooks for children, she was also a naturalist, poet, columnist & feature writer, editor of educational books, universal teacher, prolific songwriter (over 300 songs), professional storyteller,  playwright, artist & illustrator and a passionate gardener.

The book is nicely divided into chapters, each covering a different area of Blyton’s professional career. Those chapters are:

Those make up part one of the book which is the largest part. Part two then contains several short articles:

Then at the end are a huge number of appendices taken from the various magazines, books and other publications to which the early chapters refer to. As well as that there are photographs and scans through part one. 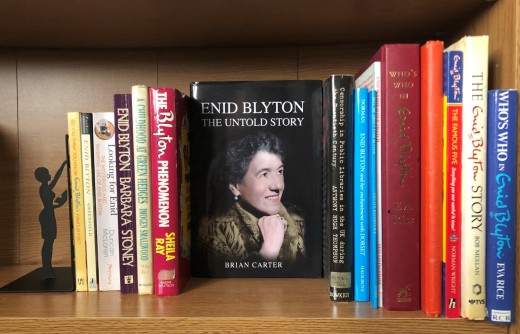 Did I learn anything?

I did, actually. So often when you read about Blyton you will read the same thing over and over. Prolific writer… over 700 books… The Famous Five and Secret Seven… controversy… banned from libraries and schools…

Brian Carter has focussed on some of her lesser-known skills. Most of these subjects I had some knowledge on but phrases from his book such as Enid Blyton, artist and illustrator or qualifications in zoology and botany gave me a momentary pause. But of course they are both entirely accurate, if often forgotten facets of Blyton’s life and career.

I was already aware of her work for Teachers World, if not in great detail, and of her magazines, periodical contributions and various non-fiction books, but the way these are all laid out in The Untold Story brings fresh understanding. Although the book is not presented in chronological order there is enough sense of time and progression that I came away with a much better understanding of how her writing career developed.

There are, of course, various things that have had to be assumed or inferred as the full details are not known. On the whole I found The Untold Story to stick to sensible and natural conclusions and is generally clear when a piece of information is an assumption.

As time went by it must have dawned on Enid that writing songs for schools was not as profitable as writing storybooks. It was probably for this reason she took a clear break from writing songs outright to using some of her own poems as the basis for songs.

There are only two real exceptions to this. The first is a strong assertion that Blyton truly believed in fairies – she may have done but there isn’t the evidence there to say for sure.

Another hint she gave of how strong her belief in these folks can be seen in a passage from an article she wrote for The Teachers World… to introduce her new home, Elfin Cottage, to her fans: “…Flowers “belong” to Elfin Cottage. They look at home there – and that confirms me in my secret belief that fairies and elves, brownies and gnomes, have visited the house and left some of their ﬂower-loving, sunshiny personalities behind.”

Indeed, so strong was her belief in fairies that bits and pieces slipped out unexpectedly in unusual places, as shown in the following extracts from her ‘Enid Blyton’s Nature Lessons’ in The Teachers World: …There are ten stamens hidden away, and each has at its tip a bag of pollen – fine golden dust fit for a fairy’s baking powder…

Given that she was writing to and for children in both these Teachers World examples it’s not surprising that she would say she believes in fairies.

The other inference that goes too far for me is the matter of clairvoyance.

This then is evidence to substantiate the theory that the stories written by Enid Blyton could have been the work of some supernatural agent, such as the soul of someone who lived on this earth before. A hypothetical case could be that of a storyteller whose ambition to have her novels, poems and so on published was thwarted when some untoward event cut short her life. Could her soul have come back, like the souls of Charles Dickens and Patience Worth, to get Enid Blyton to fulfil her ambition? Before coming to such a conclusion, let us turn our attention to the second theory to be considered, namely, that the stories could have been culled from the vast storehouse of material locked away in her subconscious mind and put together spontaneously through the process of the Association of Ideas.

Blyton has talked about the cinema screen in her mind, and so we all know that she doesn’t write using what we would think of as a conventional method. I don’t pretend to understand the human mind – it is fabulous and complex and no two minds think or work in the same way, but to jump to the supernatural is a jump too far for me.

This idea is developed through a whole chapter and referred to elsewhere in the book, however at least at the end of the main chapter the least outlandish of the theories is selected as the most likely.

I don’t usually comment on the writing style of books specifically but I thought it deserved a mention here.

The subject matter here could become very dry and academic, but Brian Carter ha managed to keep it engaging and interesting. The small suppositions ‘Enid must have…’ and so on help as does the chatty conversational sentences that pepper the chapters amongst the facts.

There’s a touch of the way Enid used to talk to her readers at the end of some chapters about it. You can find an two such examples below:

All in all I found this an excellent book. I don’t believe in clairvoyance or anything like it so I admit I read those parts with a bit of a roll to my eyes, but there’s more than enough real facts through the rest of the book to make up for that.

At the moment the only place to get a copy is eBay – the listing can be found here. The price – £20 plus p&p – may seem a little high but this book has been twenty years in the making and is a clear labour of love. It has also been self-published, however the finished product is of excellent quality. It’s a hefty book, nearing 400 pages, and the cover, pages and dustjacket are all of good quality. The pictures are well reproduced as are the 70+ appendices.

I’m very pleased to have this book on my shelf alongside my other Blyton biographies. 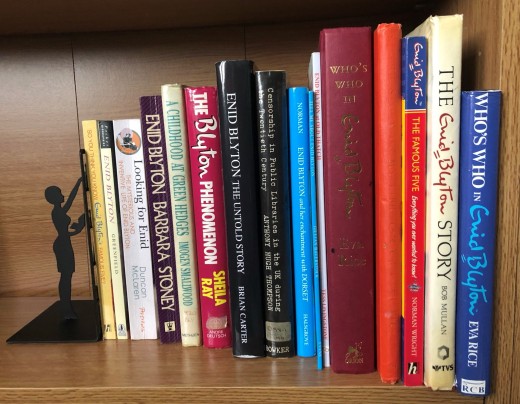 3 Responses to Enid Blyton: The Untold Story by Brian Carter