After discovering my Dean edition of Chimney Corner Stories didn’t contain the same stories found in the first edition I wrote quite a bit about that, so here is a review of the remaining stories.

The three toy stories are quite different from each other, though two throw up questions regarding the ‘rules’ of the toy world. 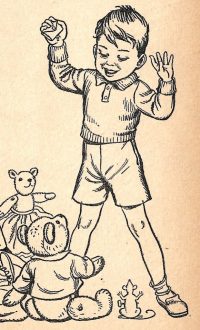 In The Clockwork Mouse Gerry forgets his purse and the clockwork mouse races off to take it to him out on the street.

It’s unusual to see any Blyton toy running around in the day,  especially on a busy street as so many stories make a point of the toys having to be perfectly still and inanimate during the day and/or when any people are around.

What’s extra bizarre is although Gerry is amazed that the mouse is there with his purse, he can hardly believe it, but then he just jumps on the bus and leaves his miraculous toy in the street!

She Turned Up Her Nose sounds like the title of a standard unpleasant child sort of story but the She is a doll called Anabella Mary. She’s unpopular like Amelia Jane, but because she’s too grand and stuck up rather than being particularly unkind or naughty. She is not invited to a party as she didn’t help to clean the dolls’ house, but she feels bad and turns her fine coat into new curtains to make amends. It would be interesting to see if she stayed un-stuck-up after that, or if like Amelia Jane just went back to her old ways!

The Smickle-Smockle sounds like something Amelia Jane would make (remember her plasticine snake tail?) but it’s made by a Golly who rather likes to pick on the quieter toys. He makes a strange creature from the plasticine:

“Small head, enormous ears, a long neck, a perfectly round body with wings, and a long tail like a fish. It had three feet at the front and what looked like a wheel behind.”

The pink rabbit is terrified of it and has a miserable few days. The bear tells Golly he must fix the problem so for some reason he makes some plasticine vegetables which the pink rabbit eats. This means Golly must give up his fifteen farthings (less than 4d) to buy new plasticine.

This story throws up a question of the toys ability to digest things – they eat cakes and so on in many stories – but here it’s said that the pink rabbit had insides make of sawdust.

Some of these stories could fit into more than one category, I suppose, or at least sound like they could.

The first, Trit-Trot the Pony, could be classified as an animal story as it does feature a rather sentient horse. Trit-Trot likes some of the boys, like Billy, who pass his field, but he dislikes Harry as he is not a kind boy. When Harry steals from Billy, Trit-Trot apprehends him and makes sure Billy gets his money back.

The Little Bully sounds like a straight-forward story about a nasty child but it has talking crabs and lobsters in it. Does that make it an animal story or a magic one perhaps? Anyway, the pinching creatures teach Henry a lesson as he likes to pinch other children.

animals or magic elements. In it, Thomas comes to play with Henry and has a tantrum at home time as he wants to take the toy cars home.

His mother is annoyingly unhelpful and says “He has been very unwell, and I have had to give him his own way a lot. The doctor says it is bad for him to scream.” I mean, emotional blackmail or what?

Henry’s mother crumbles and persuades him to lend the cars and he is naturally very worried about whether they will be looked after. I had a bad feeling about it but was pleasantly surprised that the cars were returned by a sheepish Thomas who has had a stern talking to from his father.

I’m not a huge fan of animal stories, actually. I find animals interesting but I don’t fawn over them the way some people do.

The Three Strange Travellers are a goat a duck and a dog who are all homeless. They band together and shelter with an old woman one night. They are then able to rescue her from thieves and she takes them in permanently. This reminded me a little of the Julia Donaldson book What the Ladybird Heard where the farmyard animals conspire together to foil Lanky Len and Hefty Hugh who come to steal the fine prize cow.

I think Blyton forgot that The Proud Little Dog wasn’t a magic tale as she names the dog Prince, the cat Green-Eyes and the woman Dame Tiptap. Then again, the dog, who is spoiled and runs away seems to be able to communicate on an unusually skilful level with his owner! When he returns a cat and kittens are in his usual place and he has to accept less impressive lodgings as a consequence of his actions.

The Disagreeable Monkey is a story of monkey vs mirror. There are five nice monkeys and the greedy bully Bula.  A mirror is put in their cage and while the other monkeys are amazed to see so many other monkeys, Bula is enraged and tries to fight his reflection. Monkeys are supposed to be intelligent but none of them ever figure it’s a mirror! 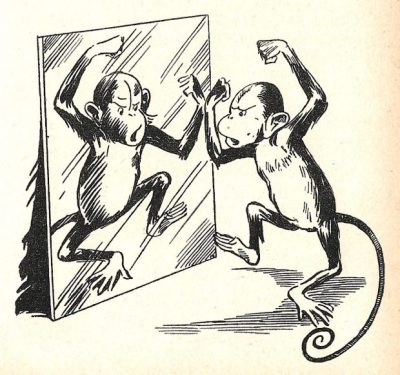 And the adventure story

I was excited to read The Secret Cave but it ended up being a little disappointing. The most notable thing about it is that it was written in the first person, which was very unusual for Blyton. It’s not unique but I believe there are only a few times she used that.

The story is told by Roger, who along with his twin Joan and older brother William live in a lonely house by the sea. The only other house nearby is a large empty one. I was picturing Spiggy Holes and The Old House at this point!

Just like in The Secret of Spiggy Holes the story takes the children into the walled gardens of the old house where they find and old shed (locked from the inside) and turn it into a play house (much like in The Treasure Hunters). Inside they find a secret passage under the floor which leads to a cave which is filled with old boxes containing clothes and other personal possessions.

Back in the garden they meet an old man – the owner of the house – who tells them a tale of murder and intrigue which explains the boxes in the cave.

Unfortunately the story doesn’t make a whole lot of sense on a couple of points, and although its an attempt to tell a tale like the deliciously dark ones in, say, The Ring o’ Bells Mystery or Five Go to Demon’s Rocks, it just comes across as a load of exposition to resolve the story.

The man’s family was to flee France but were captured at the last minute. Their belongings, as arranged, were delivered to the cave but the ship sank on the return voyage leaving the whole thing a secret.

As the only survivor the man came to live at the house as a boy, but he nor anyone else ever found the secret passage or the cave and boxes.

The fact that nobody – even when looking for a secret passage – ever investigated the shed, or used a boat to look for the cave end, is odd enough. But the shed, locked from the inside, also had a flagstone and a carpet covering the trapdoor. How did they get laid down again so neatly if whoever locked the door then went down the passage? Or if the person came up the passage and laid them down, how did they then lock the door from the inside?

Overall this isn’t one of the best short story collections I’ve read, for me there were too many repeated plots (and too many magical stories). The illustrations were also a bit hit-or-miss, interestingly they were provided by two different artists – Pat Harrison and Cicely Steed.

At some point I will have a look at the first edition I’ve bought and see what that is like.