Here I am at book 18 now of the series, some four years after I began these reviews. It has been over ten years since I last read this book (though there are still some post-its stuck on the pages where macaroons were mentioned, for a post I wrote in 2020) and so I am noticing various details that I had forgotten! 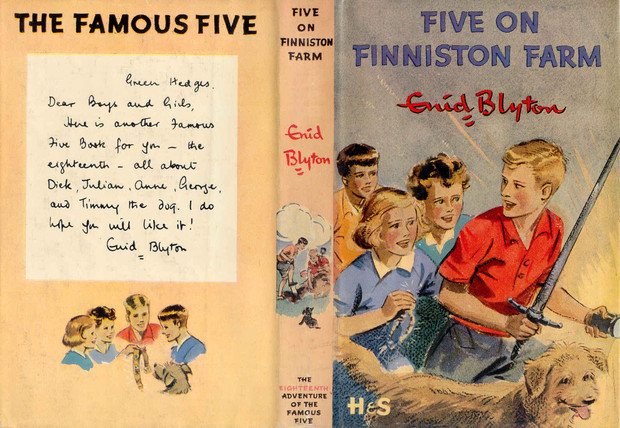 An Airbnb horror story all round

It’s very easy for a book review to turn into a summary of the book with added comments. Today I’m going to avoid that by focussing first on one element of the book that really struck me, and then got stuck in my head.

If the Five were anyone but the Five they’d probably have had a bit of a rubbish holiday!

It all starts well enough, with them meeting in the charming village of Finniston, and having ice creams, but also hearing a bit about the farm they’re going to.

The farm itself looks good, but the welcome isn’t exactly what you’d expect when you’ve paid to stay somewhere. Their unwelcoming wagon is made up of (as Julian says) the most twinny twins I’ve ever seen. As fascinating as that is, they are also surly and have a strange habit of speaking in chorus. Their father also looks disgruntled to have more visitors as he puts it.

At least their mother is friendly, and is making scones for the Five’s tea. Things are looking up until she says that the boys are supposed to be sharing a room with an American boy who’s already staying.

It’s almost as if the Five have just turned up unexpectedly as she says I’ve a bedroom that would do for the girls, all right – but I’m afraid you boys would have to share one with the American boy – and – er – well, you mightn’t like him.

Thankfully the boys have already said they’d be happy camping in a barn – they did this before in Five Go to Mystery Moor, but they decided to come stay at a stables which was already full up, so that’s on them.

If this was some group of children other than the Five, it mightn’t have gone so well! Especially given exactly who they’d be having to share a room with. It’s one thing to book a bed in a hostel and know you’ll be sharing with strangers, it’s definitely a potential loss of stars on your review if you book a room and have to share it with someone!

I actually started trying to work out how many bedrooms there were, and came up with five. Normally there would be Mr and Mrs Philpot in one, Old Great-Grandad in two, and the Harries in three. We know that the Harries have given up their room, let’s say that Junior is in there now. Then there’s a room for the girls, and one for Mr Henning. That makes five, which isn’t enough for the boys as well. It wouldn’t surprise me at all if Mrs Philpot had intended for the Hennings to share but they wanted two rooms and wouldn’t take no for an answer. It’s not really important, the boys sleeping outside isn’t really a plot point at all (not like Dick in the barn in Five on a Hike Together, getting the message in the night, or even the boys in the stables in Five Go to Mystery Moor so they can stop Sniffer’s dad taking the horse) but this is the sort of place my mind goes when I’m reading to review!

On the other side, and the reason I mentioned Airbnb rather than B&Bs/guesthouses in general, is that on Airbnb the host gets to rate the guest, too. (I also mentioned Airbnb as there are a LOT of horror stories about rentals not existing, or turning out to be not at all as they were described.)

The Five, I’m sure, would get glowing ratings as the boys camp in the barn (despite having paid for a room), the girls wash dishes and lay the table, and the boys milk cows, fix the hen houses and do whatever else they can to help out around the farm. Again – it’s lucky that they are the sort to get stuck in and do that type of stuff, or who knows what the increasingly harassed Mrs Philpot might have ended up doing. A special star would also have to be given for their [spoiler alert] discovering of the long-lost treasure and keeping it from falling into the wrong hands.

Speaking of wrong hands… Junior and his father would, most definitely, not get a good rating from the Philpots.

Junior is a truly abominable guest. His list of misdemeanours include:

Some of these are more minor than others. Wanting breakfast in bed is fine if the host offers that, but you ask for it politely not demand it!

His father is not significantly better, also being rude and demanding, talking rudely about Old Great-Grandad to Mrs Philpot, while the old man is in the same room,  throwing used matches on the kitchen floor and plotting to buy up as much of the farm as he can, using any unscrupulous means that he can.

In the end the Five would rate Finniston farm highly – great food, lovely place, friendly family (once the twins unbent, having seen the Five helping out a lot), great adventure to be had. Mr Henning’s holiday was definitely soured by his failure to find the treasure and his review would probably mention how he would have got away with it, if it wasn’t for those pesky kids.

Well, I’ve rambled on for nearly 1,000 words about how things would have gone if Airbnb had existed in 1960. Next time maybe I’ll get to the actual adventure!

This entry was posted in Book reviews and tagged Five on Finniston Farm, The Famous Five, The Harries. Bookmark the permalink.

5 Responses to Five on Finniston Farm