Reading Pippastef’s blog post on her three favourite characters inspired me write my own. When it came to it though, I had real trouble coming up with three characters. Other people seem to be able to instantly produce a few characters they would call their favourites but I really felt like I only had one. I thought a lot about the various Enid Blyton characters I like and I think my trouble is that I enjoy the characters as a group rather than as individuals. I like the kids in the Secret Series for example, they all have good points, but which is my favourite? None of them, really – on their own I can take them or leave them. Together is where their magic lies. The one exception – my immediate favourite  – is Julian Kirrin.

Probably my first ever crush – a very innocent one as I was only a child – Julian was everything I wanted a boy to be. He is kind; to his family, his friends and to the people he comes across from small and frightened children to vulnerable old ladies. He is brave; facing dangerous situations and dangerous people all the while trying to protect those in his care. He is unfailingly polite, able to negotiate rates on food and lodging with almost any farmer’s wife, and even when he’s being rude it’s politely rude. He’s tall, athletic and good-looking, need I say more?

Julian is first to explore the cellar at Two-Trees, though he sensibly takes Timmy with him. From “Five on a Hike Together” illustrated by Eileen Soper.

After further thought (and some conversations with Stef) I decided on my next favourite character and it’s not even a person. This character really seems to divide opinion, you either love her or hate her.

I’m not really an animal person, and the animals I like tend to be small and furry rather than feathery. Yet here I am declaring a parrot as one of my favourite characters.

Kiki may be a bird (and bird-brained along with it) but she still has a huge amount of personality. Her critics say she’s too unrealistic, but I don’t care. She’s hilarious. From her infamous express-train-in-a-tunnel screech to her police-whistle imitation. From her rhyming obsession with fusty-musty-dusty and busy-dizzy-Lizzy to her Welsh “look-you, whateffer”. From comforting Aunt Polly with murmurs of “Poor Polly” to confusing the life out of Uncle Jocelyn, Kiki never fails to make me laugh. Hiding under someone’s bed and barking like a dog? Hilarious. Her angry war-dances on Jack’s shoulder? I love them. Mournful coughing from a darkened corner? Extremely funny, and also very useful as often this is enough to scare off the enemy. The Trents and Mannerings would have been in real trouble on many occasions had it not been for Kiki’s amazing repertoire of words and noises. As a child it never struck me as odd that Kiki always seemed to know the right thing to say, but then Blyton didn’t consider criticism from the over 12s as worth listening to, and in this case I think she was right.

Kiki puzzles Phillip in “The Island of Adventure” illustrated by Stuart Tresillian.

The third character on my list was the hardest to decide on. I’m imagining people reading this and thinking “how can they be her favourite if she couldn’t even decide on them?” They might have a point.

I considered George Kirrin for a bit. She’s feisty, determined, loyal, stubborn (something I relate a lot to) and has a real temper (again, something I relate to) but in the end while I’m amused by her “as good as a boy” shtick, I don’t relate to that much.

I thought about the four Adventure Series kids and I briefly considered Darrell Rivers, Sally Hope and Mary-Lou from Malory Towers. And then I had it – for definite.

How could I forget Irene? Coincidentally, forgetfulness is one of Irene’s most memorable characteristics.  At Malory Towers for the full six years of the series, Irene provides real comedy moments throughout the terms – turning up to the wrong class at the wrong time (and sitting for an age wondering why nobody else is there), doing other people’s class chores when it’s not her turn, leaving her hat and cloak lying around the school and driving poor old Matron batty by losing her school cert almost every term. Irene isn’t daft, though, her brains are just too busy focusing on her two loves – maths and music (two things I am terrible at, by the way).  Even more amusing, is that in Second Form at Malory Towers Irene makes friends with a new girl, the equally scatterbrained Belinda Morris, and despite their best efforts the two of them are of no help to each other – quite easily watching the other walk around the school still wearing their out-door hat and cloak without noticing anything amiss. 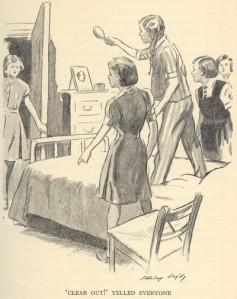 Irene brandishing her hairbrush so fiercely she nearly hits Belinda in the face in “In the Fifth at Malory Towers” illustrated by Stanley Lloyd.

For the reasons above, Belinda gets an honorary mention as my fourth favourite character. Well that and her collection of scowls – how I wish I could flick through and see all the drawings! So from struggling to choose three characters, I now have four. Bet you didn’t see that one coming!

Do you consider any of these characters your favourite? Whether you agree or disagree you can have your own say in the comments – or better yet – write your own list for us to post!