Especially in the second series of the 90s Famous Five, we had some cracking funny and cringe worthy moments.  I thought we would have a look three of the best ones.

3. Uncle Quentin’s sandwiches in Five Run Away Together

One of the absolute best, funny moments ever. Uncle Quentin making sandwiches because Aunt Fanny is away and Mrs Stick doesn’t want to make sandwiches for the children’s picnic. He bravely volunteers to do them himself, with disastrous consequences. He manages to cut his hand, the ‘slices’ of bread are more like hunks, and uneven ones at that, which look like half a loaf.

The other hilarious thing is the use of the fillings. As Anne and George remark on opening the packet of sandwiches:

“And that’s lemon curd in with cheese.”

The look on the faces of the Five is quite hilarious, and even more so, when Dick, who is known to eat anything, is sat on the beach demolishing the sandwiches. Check out the episode here on YouTube for the hilarious scene. 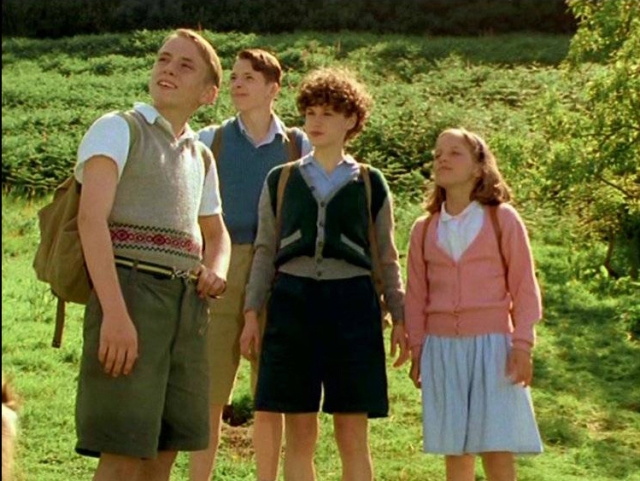 2. Anne turns tiger – Five Have a Mystery to Solve

Across the series, Anne turning into a tiger has to be one of the best scenes Enid Blyton wrote and it really does translate nicely across to the screen. I am glad that they didn’t edit it out or change the scene in anyway, because it really is a girl power moment for sure.  For those who don’t know, Anne throws a bucket of cold water over the boy Wilfrid who is staying with them, because he’s being mean to her and trying to scare her with mice, rats and snakes. Its a real power moment for Anne as she drenches the boy and when Julian, Dick and George turn up accuses them of thinking of her as a mouse. They assure her that now, they think of her as a tiger.

You can catch this lovely scene here, or on Youtube.

I literally cannot watched this scene for the fact it is so cringy and out of character for Julian. It’s their first morning at the camp on Billycock Hill and he’s trying to get the others energised and motivated for the day, but he decides that the way to do this was to do some exercises (clearly a part of his school life, and probably training for his National Service, because even Dick looks perplexed.) Anyway, its one of  most hilarious scenes that was made in this series, and Fiona and I just can’t hide our disbelief when we watch it. I hope it makes you just as disbelieving as us!

3 Responses to Funniest Scenes from the 90s Famous Five