Ripping Things to Do by Jane Brocket

You may recognise the name Jane Brocket, she wrote the recipe book Cherry Cake and Ginger Beer as featured quite a few times when Stef has tested out the Blytonian recipes.

I’ve been reading Ripping Things to Do with interest now that I am a parent. Brodie is far too young to do any of the things I have read so far but I am storing up some of the ideas in my head for later, and I can’t wait!

Blyton’s works feature regularly as fodder for ripping things, but so do any other fabulous children’s authors like Arthur Ransome, A.A. Milne and E. Nesbit.

“We must do something,” said Alice…
“Yes, but what shall we do” said Dicky…
Let’s read all the books again. We shall get lots of ideas out of them.”

The above quote is from The Story of the Treasure Seekers by E. Nesbit, and it appears on the back of Ripping Things. It’s a quote that pretty much sums up the idea of the book as it is a compendium of things to do, taken from children’s literature. As the subtitle on the front says – The best games and ideas from children’s books. 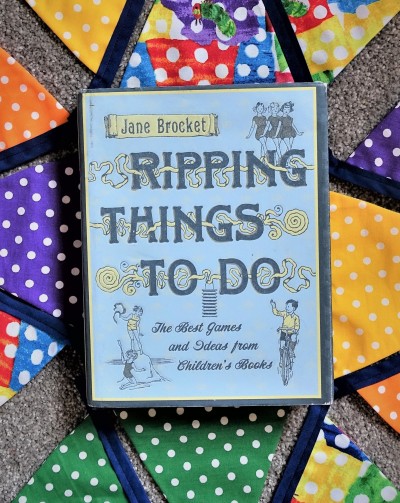 There is a sensible caveat in the introduction, though. Brocket tells us there are two types of ripping things in children’s books, ones they can do and ones that they can’t. For example they can’t just get rid of their parents for weeks at a time, or go off on a sailing holiday alone and it’s recommended for obvious reasons that they don’t get  involved with police investigations or local criminals. It’s a shame for those who really want to imitate the Famous Five or Secret Seven, but as it’s rare to stumble upon smugglers operating outside your modest suburban home these days it’s not the end of the world.

So what’s left? There are sections called secrets and spies, making stuff, ripping games, red letter days and summer days along with many more.

BLYTONIAN RIPPING THINGS TO DO

This wouldn’t be an Enid Blyton blog if I didn’t focus on that element of things so first I will look at the Blytonian things have made it in.

Most of the ideas come from the Famous Five (FF) and the Five Find-Outers (FFO), but there’s a few from the Secret Seven (SS) and the Barney Mysteries (BM). There are also some generic ideas that could have come from any number of Blyton’s books.

There are also a few Blyton books recommended in the seasonal reads lists. 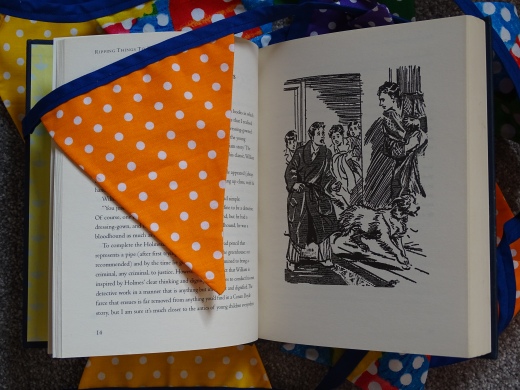 My favourite Famous Five moment got included as an illustration.

Aside from boo-hoo-colly-wobbles (which would be hard as there are no rules or descriptions given apart from it being very noisy), I don’t think much has been missed out. Perhaps making hot drinks by pouring boiling water into jam jars (SS). A few more nature things might have been nice – it’s mentioned that Blyton was knowledgeable about orithology, botany and horticulture – so one or two of her tips on bird watching or feeding garden birds etc could have featured.

Saying that there isn’t a lack of Blyton ideas there already!

One thing I thought curious was that Fatty was described as a nerd! I’ve never thought of him as particularly geeky or nerdy, but it would be interesting to see if others think that term fits.

There are masses of other ideas to be inspired by. Some are favourites of mine like playing Pooh sticks (Winnie the Pooh – A.A. Milne), picking your own fruit (Milly-Molly-Mandy – Joyce Lankester Brisley), jumping in puddles (Alfie’s Feet – Shirley Hughes), mazes (The Enchanted Castle – E. Nesbit), making dens (The Box of Delights – John Masefield), beach combing (Up the Steps – Nora Acheson), making paper fortune-tellers (The Fete and Fortune – Richmal Compton), playing with chalk (Mary Poppins – P.L. Travers) playing at post-offices (Little Women – Lousia May Alcott) and making your own Borrowers’ house* (The Borrowers – Mary Norton).

Then there are others that I’m intrigued by like making butter by shaking milk in a jar, making a time-capsule (The Midnight Fox – Betsy Byars), making a get-better box and growing a tree in the neck of a bottle (both My Naughty Little Sister – Dorothy Edwards). 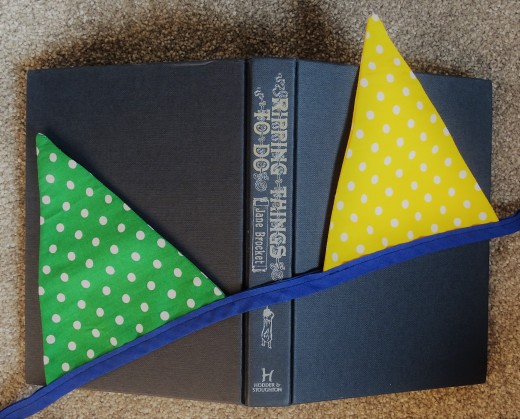 I really liked this book. It’s peppered with references to books I’ve read (and some books I’d now like to read!)

It’s full of refreshingly old-fashioned fun. I like how it states a few times that you don’t need to buy special equipment to do most things. You can juggle with any old thing, you don’t need juggling balls. Children are better off dressing up in old clothing (theirs or grown-ups’) rather than costumes bought in a shop. Tents are just as good made of a sheet over a washing line or tree branch. Essentially imagination is key.

Also refreshing are the mildly-dangerous-by-today’s-standards ideas like tree-climbing, and – as Brocket puts it – uncouth things like damson-stone spitting.

The book is an excellent antithesis to buy a toy/game/tablet/smartphone to amuse children, and to the idea that children should be heavily supervised, micro-managed and wrapped in cotton wool. As Brocket says in the book, boredom can actually be a good thing.

In short I think it’s a brilliant book and I will have to return to it later when Brodie’s older and he can join me in doing some of the things. 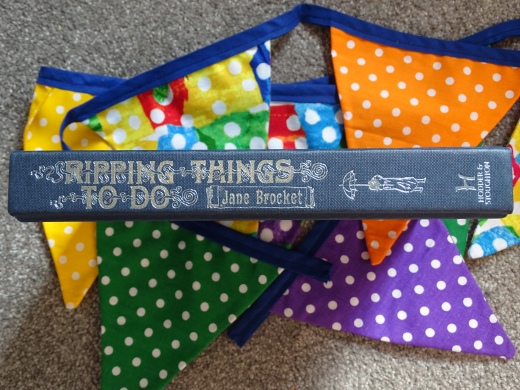 *When we were young my sister and I made miniature houses in shoe-boxes and boxes that had contained photo albums (for a nice two-level effect) but we called them pony houses because the first one had been a house for a My Little Pony toy. The fact that a Jam Pop doll, Cupcake doll or Aladdin and Jasmine figures were then the occupants of these houses made no difference to their name.

This entry was posted in Book reviews, Other Authors, Toys and Games and tagged Adventure, Jane Brocket, Ripping Things to Do, The Barney Mysteries, The Famous Five, The Five Find-Outers, The Secret Seven. Bookmark the permalink.

3 Responses to Ripping Things to Do by Jane Brocket