Ripping Things to Do by Jane Brockett

Fatty shuffled his way to the bus-stop bench near Goon’s house. He let himself down slowly as if he indeed had a bad back. He let out a grunt. An old lady on the bench looked at him sympathetically. Poor old man! She leaned across and pressed a sixpence into his hand.

Fatty was so taken-aback that he almost forgot he was a tramp. He remembered imediately though, and put his finger to his forehead in exactly the same way that his father’s old coachman did when he came to see him.

“Thank you kindly,” he wheezed.

Another of Fatty’s disguise performances, this one is from The Mystery of the Invisible Thief.

Amelia Jane is a home-made doll, rather than a shop-bought one, and that is why she is so extremely naughty. She is also a very large doll which means she can easily push aside the other toys to get her own way. Unfortunately for Amelia Jane, getting her own way doesn’t always turn out well and she briefly learns lessons before her mischievous nature rears its head again. 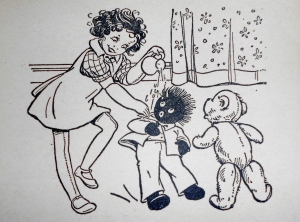