We left Jo, Silky and the others in The Land of Spells last time – he had just been turned the right way up.

MOON-FACE (AND OTHERS) IN WONDERLAND

The next disaster, which perhaps borrows a little from Alice in Wonderland, occurs before they’ve even got back to the Faraway Tree. The silly Saucepan Man buys a growth spell and spills it, causing Moon-Face, Jo, Silky and himself to grow too big to get through the hole back to the tree. He spills so much there is none left to use on the hole to make it larger.

It takes a while for them to work it out but they do then get a shrinking spell which returns them to their normal size (except for Moon-Face who likes himself just a tad taller) but then the land starts to move away, it grows dark and they end up down the wrong hole.

This hole leads to the home of Mr Change-About. He starts off fat and jolly, but as his name suggests he soon changes-about to thin and angry, and then from huge to so small he gets trapped in one of Saucepan Man’s kettle.

They go up the chimney to escape, but instead of ending up on the roof they climb into the a cellar which belongs to an enchanter, and so have not escaped at all. Frying pan and fire comes to mind!

Thanks to another purchase from the Land of Spells they escape on an upside down flying table and a flying bench, and the children land in their own garden. Their surely too dim to be real mother is only mildly surprised by this!

That wasn’t an order for you to search for buns online. Google buns are another delicious treat served in the Faraway Tree. Moon-Face etc wonder if the children got home safe on the table as they don’t see them for a while (they are having a brief ‘let’s never go up the tree again, it’s not safe’ period), and invite them for tea.

The buns were most peculiar. They each had a very large currant in the middle, and this was filled with sherbet. So when you got to the currant and bit it the sherbet frothed out and tasted delicious.

I’d definitely eat one of these!

DREAMS IS FULL OF MYSTERY AND MAGIC, DO NOT TRY TO UNDERSTAND THEM – THE BFG

Dick can’t help himself and goes up into the next land which turns out to be The Land of Dreams. Pretty quickly the Sandman comes and puts them to sleep.

They then share the strangest collective dream which exactly sums up the way dreams go. There’s ice cream you pay for with marbles, but it turns out to be whistles and not ice cream at all. The whistles summon policemen who get pushed into a swimming pool of their own tears, where they turn into fish. The children get into an aeroplane to escape the land of dreams – but the plane turns into a bus and then a boat because they are still dreaming (this resonates a LOT with me as I’m always having those awful dreams where I think I’ve woken up but haven’t, over and over!).

Anyway, plenty more weird stuff happens to them, until finally they start feeling very sleepy and doze off on a giant walking bed. Luckily the bed takes them back to the hole leading to the Faraway Tree where Silky has returned with Dame Washalot, Mister Watzisname and the Angry Pixie.

They neutralise the Sandman with water, and the bed is made to fly them home with the last of the ointment from the Land of Spells.

Having learned nothing from their previous escapades (but then there would be no book if they learned!) the children are soon tempted back by the Land of Do-What-You-Please which is even better than the Land of Take-What-You-Want according to Silky and Moon-Face.

Dick and Bessie get their wishes right away, and without incident – apart from being very dizzy after the roundabout. It’s just as well they rode that before the ice-creams or that could have been messy! 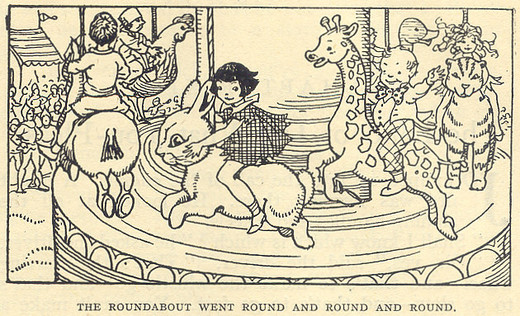 The train journey isn’t quite so smooth, the train misbehaves a lot and goes too fast but nobody gets hurt. Nothing truly bad happens with the elephant rides either – Moon-Face is briefly stuck when his rope-ladder breaks off but the elephant lifts him down with his trunk instead.

So far, so good. But surely it will go wrong somehow? I mean it always does!

Well for once, it doesn’t. They finish their day with a paddle in the sea and then go home. Weirdly Aunt Polly asks Dick how he got so wet and calls him a naughty little story-teller when he tells her. So she doesn’t believe that but she’s completely OK with flying tables?

There’s some great imaginative things in these chapters. The land of dreams is particularly good, as is Mr Change-About. I would like to see him crop up again in fact.

This entry was posted in Book reviews and tagged Alice in Wonderland, The Enchanted Wood, The Faraway Tree, The Magic Faraway Tree. Bookmark the permalink.