The last chapter I read ended after they returned from the weirdly wonderful Land of Dreams. I wonder where they will be off to next!

THE LAND OF TOYS

In another random moment of the tree having a schedule the Land of Goodies is due to arrive and the Saucepan Man is to go there and collect food and for a party. Dick is particularly excited as, like his Famous Five counterpart, he loved eating good things.

Except the schedule is wrong and it’s the Land of Toys not of Goodies. Not a complete disaster, you think, as it just means there’s no treats to be found.

However, Saucepan Man isn’t the brightest and he doesn’t notice it’s the wrong land. He just waltzes into the sweet shop and tries to help himself to its wares, getting himself arrested by the toy soldiers. Jo and Dick buy costumes and dress as soldiers to rescue the Saucepan Man from the fort – but of course girls must watch from afar. That’s not quite the end of the problem though as the soldiers and other toys follow them down the tree and end up getting pushed down the convenient slippery-slip. 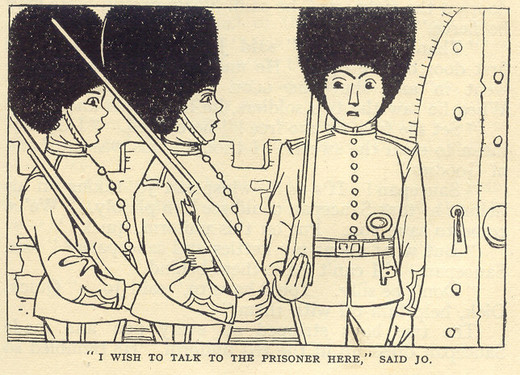 The final problem is that Jo and Dick are still in their costumes and have left their ordinary clothes up in the Land of Toys. Luckily two soaking soldiers come back up the tree having fallen foul of Dame Washalot and offer to retrieve the clothing in return for the soldier costumes. It’s another overly-convenient solution, and seems like an afterthought.

THE REAL LAND OF GOODIES

Despite the troubles in the Land of Toys, they still go to the Land of Goodies when it arrives. They nearly don’t make it in time, as their mother isn’t happy with them for suddenly turning into naughty, careless children when previously they have been very responsible and reliable.

The Land of Goodies has houses made of sweet treats like the witch’s house in Hansel and Gretel. There are trees growing currant buns, and ones growing biscuits. They all eat like crazy but greedy Dick carries on and on – eating window ledges and a door knocker after Jo tells him he can’t take anything else from the shops. The door knocker gets him into trouble from its owner, and he as to sit in the man’s house while the others eat strawberries that have grown with cream and sugar on them and gather goodies for the other folk of the tree. Dick’s clumsiness then causes those treats to fall on the folk and makes them angry.

The angry folk start threatening spankings, and we get one of those genuinley funny, knowing jokes:

Golly!’ said Jo, in alarm. “It looks as if the Land of Spankings is about to arrive up here.”

In a rare un-Blytonish momeny they all decide to hide and pretend it wasn’t them, instead of owing up and apologising. Moon-face’s stickiness unfortunately gives him away, so he and Saucepan Man end up back at the children’s house for the night.

Mother takes Moon-Face and the Saucepan Man’s stay well, barely raising an eyebrow. Getting a free kettle and saucepan probably helps, but even a toffee-shock doesn’t provoke too much of a reaction from her. She’s a strange one!

Moon-Face is a very helpful guest in the garden it has to be said, but Saucepan Man spends his time mishearing instructions and trying to round up sparrows and sheep. 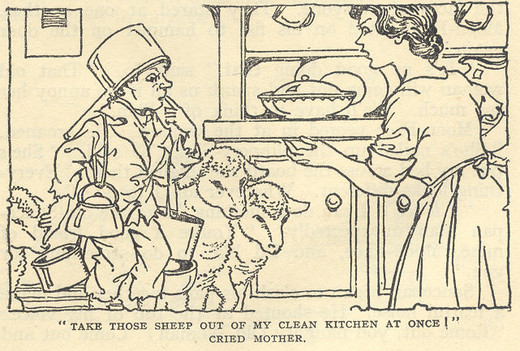 Dame Washalot then mistakes the children for the Old Woman’s children and chucks them as well as Moon-Face, Silky and the Saucepan Man up into the Land of the Old Woman.

There are some familiar settings here – the Land of Toys is really just Toyland from the Noddy books, while the Land of Goodies is full of things that wouldn’t be out of place in Willy Wonka’s chocolate factory.

This book precedes Noddy by six years and Roald Dahl’s book by over twenty years though, so we can’t accuse it of copying ideas. The contents of the chocolate factory are quite famous, perhaps because of the two films about it, so it’s interesting to see such similar ideas in a Blyton book as well.

Next time we will find out how they deal with the Old Woman, and if they can return her to her shoe to reclaim Moon-Face’s house and the slippery-slip.

This entry was posted in Book reviews and tagged Charlie and the Chocolate Factory, Faraway Tree Series, Noddy in Toyland, Roald Dahl, The Enchanted Wood, The Magic Faraway Tree, The Old Woman Who Lived in a Shoe. Bookmark the permalink.