As you may have gathered from my last fan fiction post I like to think of myself as a bit of a writer. I received very positive feedback from those of you who read my last story and I’m truly grateful that you took the time to read it! It does mean a lot to me.

After this piece was published on the blog I was presented with an idea by someone on the Enid Blyton Society Forums for a short piece on what it would be like for Julian to tell the remaining members of the Famous Five about his ‘girlfriend’ (Side note: The piece before describes a meeting between Julian Kirrin and Sally Hope at St Andrews, which for all intents and purposes DOES NOT happen prior to my completed fan fiction novel. However, this piece takes the almost natural progression from the previous piece and assumes that in the end they do end up dating).

When this idea was suggested to me I pounced upon it immediately (figuratively, of course) and my imagination took control. I started to write down the conversations and the reactions relevant to Julian’s piece of news. Almost naturally I started by looking at how Julian would inform Dick of his relationship with Sally Hope, and what his brother’s reaction would be. So this is where I’ll start today.

In time I hope to complete the two interactions between Julian, George and Anne with the same piece of news. Dick’s however seemed the easiest to write.

I hope you enjoy this piece, please leave any feedback, and thank you very much for reading! 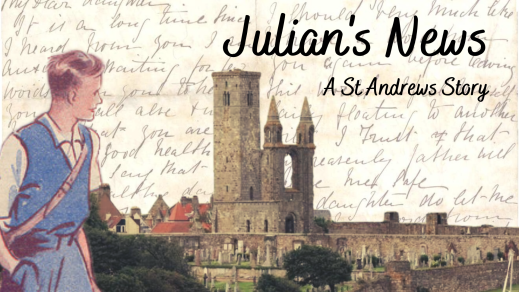 Julian Kirrin stood in front of the newspaper stand, his satchel on his back and his case by his feet. Tucked under his arm was the afternoon’s paper as he had his hands in his pockets to try and keep them warm while he waited for his brother’s train to come in.

Julian felt a little awkward about this meeting with his brother: it was the first proper time he had been away from his family for so long and he wasn’t entirely sure of how to greet him. A hearty slap on the back seemed like a good enough greeting for his younger brother.

Another reason for Julian’s hesitation was that he hadn’t been very good at keeping in touch with his family this term, what with one thing and another. The adventure he and his university friends had been on had taken up most of his time, as had the work load. It hadn’t just been the work and adventure that had kept him from writing more frequently to his brother and sister, but more importantly the introduction of Sally Hope into his life.

Sally had dominated his thoughts for most of the term, and it was only two days ago, standing outside in the ruins of St Andrews’ Cathedral when they had admitted their attraction to each other.  Julian smiled to himself at the memory as he heard the big clock strike eleven.

Yes, telling the others about Sally was setting Julian on edge. It wasn’t that he didn’t want to tell them and show Sally off, but he was unsure how his brother and cousin would take it.

Julian was almost certain that Anne would approve of the relationship. Sally was sensible and kind, like Anne. Julian smile wryly when he realised that both of them had a certain habit of asking him not to get involved in adventures.

Whereas Julian was sure Anne would approve of Sally he wasn’t so sure about his cousin, Georgina. George, as she liked to be called, had scorned Anne on plenty of occasions for not wanting to have an adventure and was in fact more like Darrell Rivers, Sally’s best friend. Julian wasn’t sure how George would take to Sally or the idea of Julian being grown up enough to be in a relationship. George did like having adventures.

Julian looked around as people started heading off the platforms, trying to spot his brother Dick. They had to make good time to get to Paddington to catch the train to Kirrin, so Dick needed to be punctual off the train.

Julian looked at his watch impatiently as the crowds began to thin out, before finally spotting Dick making his way towards him, a huge grin on his face.

“You Fat-head. I honestly was beginning to think that you had missed the train,” Julian said in a teasing tone, picking up his suitcase and starting to walk. “What on earth possessed you to get off the train that slowly! We have to get across London yet.”

“Good to see you too Julian,” Dick said, a touch sarcastically as he followed his brother. “It wasn’t my fault I was sat at the end of the train, or that everyone managed to get ahead of me!”

Julian smiled at Dick over his shoulder as they headed down towards the tube.

“You should know by now that I dislike being kept waiting,” Julian said, easily as they started down the stairs to the platform.

“Oh I know,” Dick said, with a grin, ducking ahead of Julian.  “I am familiar with you, you know!” He called over his shoulder.

Julian gave his brother a playful shove on the shoulder and laughed.

“Get on will you! There’s a train due in a moment!”

Soon enough the boys were at Paddington, and on their train to Kirrin.

“So tell me about St Andrews? What was university like? Your letters were horribly vague,” Dick said, once their luggage had been stored in the racks above their heads.  Julian laughed.

“St Andrews is, well it’s really good. It’s such a magnificent place, Dick, you have no idea. It is so different from Oxford and Cambridge. It’s like Kirrin, gets under your skin,” Julian said with a laugh. “The university is grand as well, rambling buildings and it has a nice feel to it.”

“Well that’s all very well,” Dick said, with a gleam in his eyes. “But are you going to tell me about this adventure you had? I did think you were very mean in having an adventure without the rest of the five. I suspect George will be sulking with you because if it. And when I got your letter telling me, well I must say, it was a very poor account Ju.”

“ I’m not good at writing down our adventures, only good at telling them to the police,” Julian said with a wink. “Anyway, I shan’t fill you in on the details until we’re all together, that’s only fair, and I don’t want to tell the story half a dozen times!”

Dick laughed and glanced out of the window as the train sped out of London, heading towards the coast and Kirrin.

“You seemed to be having fun though,” Dick said, after a moment. “St Andrews certainly seems to agree with you. I wasn’t even sure it was you back at the station. You seem much older somehow.”

“Do I? Well I feel older,” Julian said with a grin. “It’s certainly different from school. In fact it is incredibly different if you take the girls studying there into account.”

Julian could see an opportunity to tell Dick about Sally, as long as his brother continued with the conversation.

“So there are a lot of girls are there?” Dick asked.

“A fair number,” Julian said, with a shrug. “A couple are very good friends of mine. Sally and Darrell are quite something. Darrell is rather like our dear Georgina,” He added with a smile. Dick laughed.

“That will please George,” Dick said with a laugh. “So this Darrell fancies herself as a boy then, does she?”

“Not at all,” Julian said. “Darrell’s awfully nice, straightforward and determined like George, but certainly not a tomboy.”

“So what about this Sally?” Dick asked, out of politeness.

“Well Sally, she’s…” Julian fought for words to describe Sally to his brother. Dick cottoned on as Julian struggled for words.

“I thought that there might have been a girl,” Dick said, folding his arms, a wide smile on his face. “Sally must be special if you like her that much,” Dick added. “What’s she like?”

“Stunning?” said Dick with a laugh at his brother’s use of alliteration. “She certainly must have made an impression if you’re unable to describe her accurately. Of course the most important thing I need to ask is: When do I get to meet her?”

Julian had to laugh at his brother. Dick was on fine form today.

“Steady on! Sally and I only really agreed to start something the other day!” Julian said. “We haven’t even really been on a date yet. Let alone had time to consider her meeting all of you!”

“ All right, I shall bide my time,” Dick said. “Although I hope to meet her soon, especially as she already seems to be so important to you.”

Julian paused before he spoke this time, after considering his brother’s reaction to his news.

“How do you think the girls will take it?” he asked after a moment.  Dick shrugged.

“Well it’s hard to say. I’m sure Anne will be thrilled,” Dick said, carefully. He didn’t want to say how he thought George would react.

“I hope so,” Julian said, with a small smile. “It’s George’s reaction that I’m worried about!”

“That is a tricky one to guess,” Dick said, with a shrug. “I would think that you will just have to wait and see, Julian. I wouldn’t like to guess anything about old George!”

“Only where Timmy is concerned,” Julian said. Dick grinned.

The boys spent the remaining time on the train talking and teasing each other on their long journey.

Anne and George had broken up from school the day before and made their way down to Kirrin. Realistically Julian could have met the two of them in London and travelled with them, he had decided not to as he had wanted some time to talk to his brother after their term apart.

“Have you told Mother and Father about Sally?” Dick asked a little while later as they gathered their stuff as the train pulled out of the last stop before Kirrin.

“We talked about it a little yesterday evening,” Julia admitted as he swung his rucksack on his shoulders. “I think they were a little surprised.”

“Well you’ve not shown a huge interest in girls before,” Dick said slyly.  Julian whacked his brother on the back of the shoulder with the morning’s news paper.

“Let’s get going shall we?” Julian asked, ignoring his brother’s comment. “It’s getting rather late I don’t think we should keep the girls waiting outside with the pony trap.”

Dick smirked and picked up his suitcase, and followed Julian off of the train.