Posted on December 8, 2012 by worldofblyton

Kiki has always been my favourite Blyton animal. She’s funny, adorable, and loyal. How? What made me say that? You might disagree. But funny, for example should be obvious. With her ready stream of talk, way of getting mixed up, and sometimes making noises at crucial points of the adventure to scare away the baddies she always amuses me. For example, in The Valley Of Adventure, when Juan goes to have another look in the shed, Kiki is sulking and is annoyed to see Juan again. “Wipe your feet! And how many times have I told you to shut the door?” This and a few other dialogues frighten the men to the point of fleeing from the shed! I would give anything to listen to her railway engine screech! She loves being the centre of attention, and seems to say quite the right things at times!

Kiki scares Juan and Pepi out of the cowshed in “The Valley of Adventure” illustrated by Stuart Tresilian.

Adorable. What tells you she is adorable? Well, I’d pay to have a pet like her! Don’t you find it adorable the way she always puts in her words, enters into the conversation, and most of all, nibbles Jack’s ears? And then what about Silly-Billy? That’s SO cute!

Now to the aspect of loyalty. Kiki is happy as long as she is with Jack, and loves to comfort him whenever he’s feeling afraid or sad. There are too many examples for this one! She will never run away from Jack, and her master gives her the love and affection he can.

But most of all, what I want to tell you regarding Kiki isn’t the above 3 aspects, but her feelings and emotions. Blyton has shown her in such a way that we think she is one of the children herself, because of her talking. But actually she DOESN’T know what she’s saying. But Kiki says doesn’t always make us share her emotions much. Blyton was a clever author as she tells us how Kiki is feeling, where Kiki wouldn’t be able to tell us herself. It is often written in the books that Kiki is sulky, sad, frightened, puzzled, etc. This shows her real emotions behind her talk. Here are a few examples:

Valley Of Adventure: Kiki is Sulky.

“Kiki was most interested in all the proceedings. When Jack hung the rope down the tree, she gave it such a tug with her beak that it was pulled from Jack’s hand and fell to the ground.”

Jack is angry with her when she does it 2 or 3 times, and she’s later shown as sulky.

River Of Adventure: Kiki is Afraid.

“Kiki hadn’t liked the continual drenching spray, and hadn’t seen anything of the waterfall at all. She had hidden herself in Jack’s cardigan, afraid of the noise and afraid of the spray.“

This shows she is afraid and doesn’t like it all much.

So you see, though she is only a parrot, she has a good many emotions, which is her most striking feature to me.

With her ready talk, this parrot will be the death of me! It has definitely made me like pets, and is a successful character in the Adventure Series for sure! 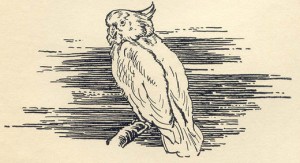 Kiki in “The Island of Adventure” illustrated by Stuart Tresilian.

More of Sunskriti’s animal explorations can be found here, or posts about Blyton’s animals in general are here.

This entry was posted in Characters and tagged Animals, Kiki, Sunskriti's Animal Character Exploration, The Adventure Series, Written by Sunskriti. Bookmark the permalink.