As you might have seen on the blog last week (thanks to Stef!) it was my birthday, and this birthday I was lucky enough to get a Blyton book. It wasn’t just any Blyton book either – it was Mr Pink Whistle’s Party which I very much wanted as it would complete the series.

It was my mum that bought me the book. My mum a) has little clue as to exactly which books I have/want/need and b) is not psychic so she had a little help from the marvel that is the Amazon wishlist (and more specifically the Amazon add-on for Chrome that allows you to add stuff from around the web to the wishlist but I’m getting off the subject). I’d spent some time browsing AbeBooks (I promise I’m not paid to advertise them!) and threw several nice books onto my wishlist as they were a little dearer than I’d normally go for if paying for them myself. They were a couple of Blytons and a few Noel Streatfeilds – of course I added plenty to make sure there was ample choice should any of them sell before people got to my wishlist.

So on my birthday I was able to open a lovely copy of Mr Pink Whistle’s Party a title that is a little harder to find in its original format (the large red soft-cover edition is readily availably on eBay). It was listed as a first edition, and on inspection it may very well be – though there is something quite interesting about it. 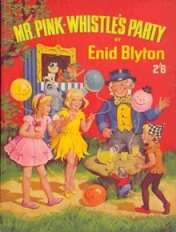 The easier to find second edition, cover by Geoffrey Higham.

Originally it was from the Boots’ Booklovers’ Library. That’s Boots as in Boots-the-chemist that’s a staple of the British highstreet. I immediately had to go investigate this and found out some interesting stuff from various online sources. Starting in the 18th century and right through to the 1960s there were commercial libraries (where you had to pay a subscription or a fee per book) run by the likes of Boots, Harrods and WH Smiths.

In the 1890s Boots was owned and run by Jesse Boot, the son of John Boot who had started the company in 1849 and who passed the company to his wife and son when he died in 1860. Jesse had a wife, Florence Boot, who in 1898 started a subscription library called the Boots’ Booklovers’ Library as she had a strong interest in literature and the arts. The library was also intended to encourage the upper-middle classes to shop in Boots as their main customers were of the lower-middle class. Initially the libraries were only in stores selling stationery, and all the books were second-hand, but quickly branches were opened in other stores and were filled with new and current books. Cleverly, the libraries were placed in the back of the shop, or upstairs, so customers had to walk through the sales areas to reach them.

Boots’ Library books are identifiable as they have a crest on the front cover (either a sticker or an embossing) and a hole in the top of the spine for the borrowers’ tag.

So all in all a really interesting story that’s got me thinking about Boots in a totally new way. I just know I’ll be thinking of Jesse and Florence the next time I need shampoo.

Have any of you heard of the Boots libraries, or better yet, did you or someone you know actually use them?

The history of the Booklovers’ Library was found on the Boots website, with more details found in a piece by Debra Found.