Continuing with the final four short stories from Five Have a Puzzling Time and Other Stories. 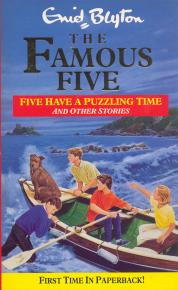 Five Have a Puzzling Time and Other Stories, Red Fox, 1997

During a lazy picnic the Five notice horses in the distance. Through George’s field-glasses Dick watches as a very valuable horse takes fright, throws off his rider and gallops off. Knowing where the horse ended up, Dick goes off to find it while the others head to the riding party to tell them.

It’s nice to see Dick being the hero of the story, even if he is just finding a horse and his commentary while watching the horse is funny too. This is another very short story but about a third of it is chatter between the Five so it doesn’t feel too rushed, though the resolution comes about quite quickly. One odd point is that Anne talks about George’s mother as “Aunt Fan.” I have no idea if that was in the original or whether it’s slipped into the reprint somehow.

This was originally published by Herald Gravure, in a strip-book form. I assume it would have been illustrated inside though the illustrator is uncredited. The cover art looked quite Eileen Soper-ish, so it may be her work outside at least.

FIVE AND A HALF-TERM ADVENTURE

The Five are at Kirrin for a few days in November and go out for a walk, up to Windy Hill. Julian’s forgotten to wind up his watch though, so they find themselves far from home when the sun starts to go down. They take the train back to Kirrin, and Timmy gets in a bit of trouble for jumping up at a couple with a baby. When they get home they hear about a tiny dog stolen from a dog show taking place in the town they got the train from. Putting two and two together, they call the police.

This is an unusual tale as the Five don’t investigate or apprehend anyone. They leave it to the police to handle. All the same, it’s a clever little story and Anne is the one to figure it out which is nice. The start is lovely too, we get a fairly lengthy description of their walk, picking blackberries and nuts and having a picnic.

This originally had lovely illustrations by Eileen Soper. 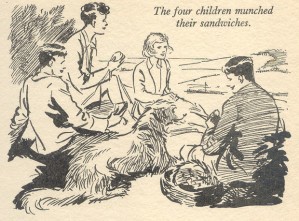 This story starts on Christmas Eve, at Kirrin Cottage where the Five, Aunt Fanny and Uncle Quentin are wrapping up presents. That night Uncle Quentin sends Timmy to sleep outside as he’s been barking, but George sneaks him into her room forgetting to lock the door afterwards. A thief breaks in to Kirrin Cottage, Timmy wakes everyone up barking and is promptly sent back outside where he doesn’t apprehend the thief for fear of getting into trouble again. Having seen where the thief went, however, he is able to redeem himself later.

Uncle Quentin is in fine form in this story, declaring Christmas a lot of ‘nonsense’ and generally being very Scrooge-like. It’s quite unlike Timmy not to bark at a thief even if he might get into trouble, but as he saves Christmas in the end I suppose we can let him off!

This appeared in a Princess Gift Book originally, and the illustrator was uncredited. 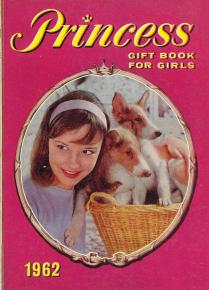 WHEN TIMMY CHASED THE CAT!

Walking to the cinema one afternoon the Five pass a large house, and a cat sat on one of its gate posts. Timmy chases the cat into the garden, where a rather deaf woman shouts at him. She says she’s just popped over to feed the cat, and the owners of the house are away. The Five hear voices near-by but think little of it. After the film, George realises Timmy has lost a badge from his collar, so they head back via the house to look for it. They find the badge quickly, but hear voices again, and singing! They suspect it’s a radio on, and go to investigate. I won’t tell you what they find, though!

Not much of a mystery here, but another chance for the Five to do a good turn for someone. 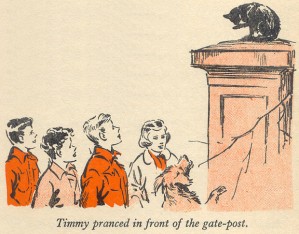 And that’s all the short stories! All in all they’re nice additions to the main series, an extra chance to spend some time with our favourite Five, even if some of the plots could be better.

This entry was posted in Book reviews and tagged Eileen Soper, Famous Five Series Synopsis, Five and a Half-term Adventure, Five Have A Puzzling Time and Other Stories, Happy Christmas, Hemesh Alles, Short Stories, The Famous Five, When Timmy Chased the Cat!. Bookmark the permalink.