Hollow Tree House was one of my favourite Blyton books as a child, though I’ve not read it in ages. I meant to, after blogging about my childhood books ages ago, but I just never got around to it. The Secret Island was another favourite, and at some point I started thinking about the various similarities between the two books. (This was going to be a straight forward review of Hollow Tree House but half-way through I realised I had sabotaged myself and have had to do a bit of rewriting.)

As I’ve mentioned elsewhere my childhood copies of these two were Armada ones. As you can see, Hollow Tree House was well read!

If I’d known at the time this blog was going to turn into a comparison of the two books I’d have brought The Secret Island down from the loft too, but instead I’ve added a picture from the Enid Blyton Society site, and I’ll just tell you it’s as battered as Hollow Tree House as they’re both 50+ years old and have been passed down from my mother. (Who, incidentally, was the one to find the paperback in the loft as I’d given up while she looked out Christmas lights to check they worked. She squealed so loudly my boyfriend wondered if we’d found a mouse – though he didn’t offer us any assistance, naturally.)

I’ve now got a second impression of Hollow Tree House without dustjacket. As far as I can tell from a quick look, both books have the exact same text (the Armada’s not updated to remove things like the children being slapped) and the same illustrations. The Armada book however hasn’t got the text laid out in the same way as the hardback does; all the illustrations are above or below text, never beside. As I don’t have my Armada Secret Island to hand, I’m not sure if the same applies there, compared to my 1949 reprint. 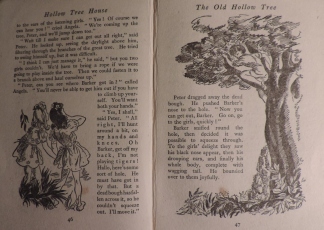 It’s funny, but as a child I never noticed how strange the children look, with their big foreheads. I certainly notice it now though. Again, without my paperback to hand, I can’t compare Dylan Roberts illustrations to E.H. Davie, though I do like Davie’s work.

So, enough edition-talk, and on to the comparisons!

The most obvious similarity is that both books feature siblings living with a cruel aunt and uncle (in both cases the aunt is the worse of the pair,) and they decide to run away.

Susan and Peter Frost (Hollow Tree House) live with Aunt Margaret and Uncle Charlie because their mother is dead. Mike, Nora and Peggy Arnold (The Secret Island) live with Aunt Harriet and Uncle Henry, as their parents are believed to be dead after flying off in an aeroplane and never returning.

Both sets of children are forced into domestic drudgery, and slapped if they don’t work hard enough. They don’t get a lot to eat and they are sorely lacking in love, except for the kindness they show each other.

Each book features the children deciding to run away, to make a better life for themselves in the wilderness.

The Arnolds choose a secret island on a lake, one they are shown by their friend Jack who runs away with them too, while the Frosts choose a hollow tree they’ve visited with their friend Angela.

The stories then become a tale of survival; finding food, keeping warm, hiding from those who are hunting for them.

Going to sleep in the hollow tree 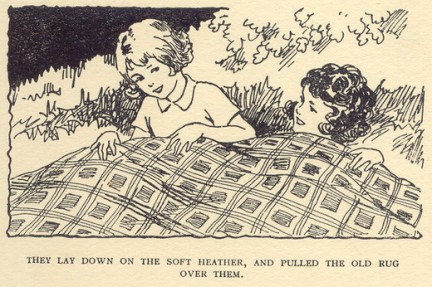 Going to sleep on the island

The Frosts are rather reliant on Angela to bring them food and other things they need, on top of what they’ve hurriedly packed up from the house (in a very similar vein to what the Arnolds did; in fact their escape to their chosen hiding places are both nearly made impossible by their aunts.)

Aunt Margaret demands to know where a clock is, and Peter cannot tell her, as it is in the tree. She then realises other things are missing and keeps the children in their bedrooms, meaning for them to stay there until they admit what they’ve done with their things.

Aunt Margaret delays the Arnold children running away as planned when she too notices things missing, and sets them chores instead of going off on their usual Sunday walk. 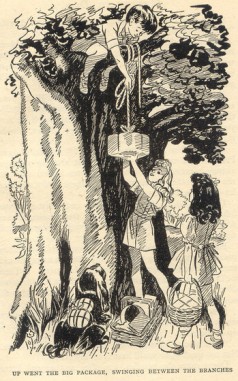 Moving in to the hollow tree

Moving their things from the hollow tree to the island

Both sets of children do manage to escape though, and then the surviving starts! The Frosts don’t have to do too much of that, as Angela brings them food, but they did spent a fair bit of time making the hollow tree a place to live; cutting a window in it, putting up a shelf and storing all their things in it.

The Arnolds and Jack have to be much more inventive; building a willow house as well as making use of caves, but then Jack is a little older and wiser and can also catch fish and rabbits etc.

Both sets of children have nasty surprises when people come looking for them, though are cunningly hidden in their hollow tree and caves respectively, and thus avoid detection for a little while.

In each story there is a happy ending (of course), with the runaway children finding happy homes.

Those are the main similarities, though The Secret Island is a longer book (my copy has 190 [larger] pages, compared to 160 for Hollow Tree House), and a bit more seems to happen. It takes the Frosts until page 108 to run away, whereas the Arnolds are gone by page 34! That gives the Arnolds a lot longer to be self-sufficient, whereas a lot of Hollow Tree House is spent with the children at their aunts house and playing in the woods.

AND SOME FINAL LITTLE SIMILARITIES

There are a couple of little things that stick out for me too; in both books the children sit and weave little baskets of rushes (Hollow Tree House) and willow (Secret Island) and then fill them with berries and things to sell.

And finally, in The Secret Island the children actually use a hollow tree to store their things in before they take them over to the island.

Oh, and it rains in both books too (that’s scraping the barrel, but there’s illustrations to go with it.) 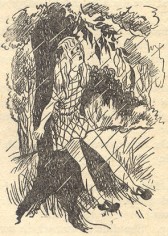 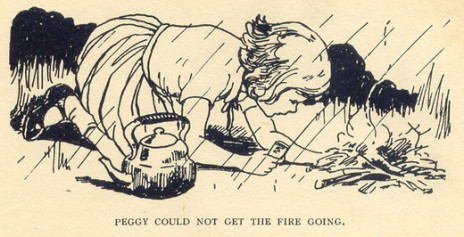 I’m not sure I could say which book I like better, they have their similarities but they also have their differences, and quite different ‘feelings’ to them.

I recommend them both to Blyton fans, and in fact I’m about to send Hollow Tree House to Stef to read, as she hasn’t read it before and copies are quite dear even second hand online. When she sends it back my mother intends to read it as it was one of her favourites as a child too.

5 Responses to Comparing Hollow Tree House and The Secret Island