Posted on September 17, 2014 by worldofblyton

An Afternoon with the Secret Seven

This story comes from Enid Blyton’s Magazine Annual No. 3 first published 1956. Again there are a few one word small changes such as fast shut becomes tight shut, brainless is clueless, ice is ice-cream, this weather becomes in this weather, frisk is play and angry is annoyed.  When there is any mention of the Secret Seven having a meeting there is no capital at the beginning of the word but in the original text it is always Meeting.

There are relatively few changes to this book apart from a few slight variations in the text.  The money that they are collecting is STILL sixpence and shilling and the pony rides are sixpenny each! I’m amazed that when we list the changes there are only about five!  In the original book only one of the Harris children has measles but it means that none of the children can help at the garden party, but now in 2014 they all have measles hence they cannot come and help at the garden party. We find that busy with the cutting of sandwiches becomes busy cutting up the sandwiches and to make sure that none becomes to ensure none of them. Originally Scamper is told to be on guard but all references to this have been deleted including the sentence: What did he mean by going off when he was on guard?

One of the prizes for the stall is a packet of cigarettes but this has been cut out and in the original text, when Barbara is trying to get Peter’s attention, she calls him twice, but this is only once in the 2014 edition. The phrase you must be blind has been cut but so has the word please.  Is Colin not allowed to be polite when asking what time they should be at the garden party?

Looking through the illustrations it’s nice to see that illustrators can cut corners and reuse the odd sketch here and there.  Reversing the picture doesn’t fool me! 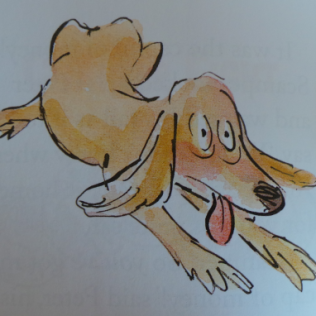 These sketches show how the pennies were found and how different ponies look after only 58 years of evolution, although they would appear to be getting fatter along with the rest of us.  I’ve also noticed that there is no caption underneath the pictures in the modern edition although this practice, shown clearly on the older illustrations ones below, is in most of the old hard back Enid Blyton books that I own. 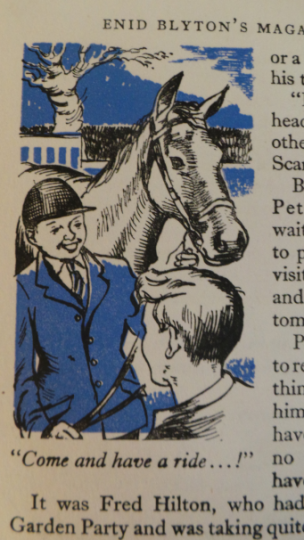 Where are the Secret Seven?

I cannot compare this book to the original 1956 Australian Wheeties strip book as I don’t have a copy of the original.  It is unsurprising therefore that I have never read this story before.

The book follows a very Blyton formulae of baddies, stolen property, old houses, clever kids and clever pets that save the day.  Some aspects of the story seem very familiar such as having to leave Scamper behind as he can’t keep up with them on their bikes (Five Find-Outers and Dog), old ruined buildings with spooky stories (The Castle of Adventure, The Mystery of the Banshee Towers etc.) and a ruin with jackdaws nesting in the towers (Famous Five). It’s a quick, simple story but highly entertaining that contains a lot of ‘strange old house’, ‘strange stories’ and ‘odd story’ which I suggest in the original, instead of strange and odd, might instead be queer. 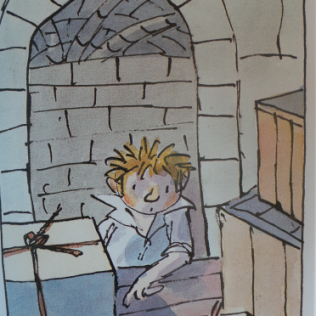 If anyone has a spare £100 to buy the original strip book so that I can do a comparison please feel free to ask The World of Blyton Blog for my contact details!

One thing I have noticed in the Enid Blyton’s Magazine Annual No.3 is a Secret Seven game.  I wonder if this will ever be reproduced?

1 Response to Secret Seven books at McDonald’s by Su, part 4