The Book of Brownies reviewed by Laura

This tale of three naughty brownies was one of the Blyton books I owned as a child and somehow went missing. I remembered enjoying their adventures and the fact it was more of a saga than a collection of short stories, so when I saw a copy in one of the local secondhand bookshops I grabbed it immediately. 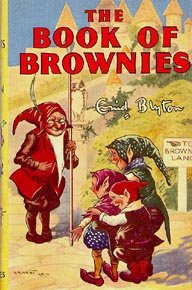 The Book of Brownies was first published in 1926 and follows the adventures of Hop, Skip and Jump, who live in Brownietown and haven’t been invited the King of Fairyland’s Grand Party. Apparently brownies who play tricks like painting pigs green and putting fireworks down a chimney aren’t on the guest list.

These three sneak into the party by pretending, with the help of a ‘friendly’ witch, to be a conjuror and his two assistants. But it all goes horribly wrong when the trick the witch, who turns out to be wicked Witch Green-eyes, gave them results in the kidnapping of little Princess Peronel. Hop, Skip and Jump keep exclaiming ‘oh my goodness’ and enrage the King, who says that they should be saying ‘oh your badness’. He then tells them that they are banished until they can find their goodness.

The three brownies decide to rescue poor Peronel and set out on their journey, only to end up in a cottage without a door. This is only the first of their adventures, as they rescue a mermaid without her tail from the Red Goblin, attend a tea-party given by giants and try to drive a train on the Green Railway, landing themselves in a pond and then in prison!

One of my favourite adventures is when they are stuck in the Land of Clever People for a long time. While they’re stuck there, they have to speak in a rhyme all the time (resulting in some odd statements), not giggle and answer riddles similar to those asked by a nasty character in the Faraway Tree books (‘why is a toasting fork’?). If they break any of these rules, they’ll be sent to the Spanker’s. The only way to escape this miserable place is to come up with something the Very Wise Man, the one asking the ridiculous riddles (which may seem somewhat familiar in style), can’t do.

There’s also an appearance by a man who’s covered in pots and pans and has a lot of trouble hearing them. Yes, Saucepan Man predates the Faraway Tree books by more than a decade. He acts as the brownie’s guide for part of their journey and has to be rescued by the brownies from a castle made of toffee and the Golden Dwarf.

It turns out that all these adventures (and their sometimes surprising solutions) have actually been useful, when the brownies meet the Labeller and his brother the Bottler, who bottles up all the goodness in the world. There are three of these little bottles with their names on them, corresponding to three particular good deeds, and the brownies think they’ll be their tickets back home.

However, they still have to rescue the princess and start by creeping into Witch Green-eyes cellar. They are caught immediately – I’m not sure they even had a plan – but they are at least taken to Peronel who is able to think of another way out, with the help of a friend the brownies made on the way. I won’t give too much away, but there are a couple of small surprises and the brownies don’t have the bottles of goodness to show the king at the end.

I enjoyed reading this book again. Some of the solutions to the various problems Hop, Skip and Jump encounter on their journey seem a bit simple or convenient to me now, except for the task they set the Very Wise Man – it seemed simple but he couldn’t do it. It’s also hard to tell one brownie from another – Hop is a bit more daring, but I can’t think of any major differences between Skip and Jump. But the odd situations they found themselves in were still funny and I still loved the ending.

Editor’s note – This was originally titled The Enid Blyton Book of Brownies. It has also been known as Brownie Tales and A Book of Brownies depending on which edition you have.

This entry was posted in Book reviews and tagged The Book of Brownies, The Enid Blyton Poetry Book, Written by Laura. Bookmark the permalink.

2 Responses to The Book of Brownies reviewed by Laura