I’ve got a lot of books, and a lot of those are Blytons. There are a great number I don’t have, though and I thought I would pull together a list of those for you this weekend. I couldn’t possibly list them all so I will stick to those I have as a ‘top priority’. Those would be titles I have in red in my spreadsheet, most of which are required to complete a series as otherwise I’d end up with more books from more series and collections than I could handle! Though, sometimes, when I see a bargain I end up starting a new series…

I’ve got complete collections of:

So I think that covers a fair chunk of Blyton’s output! You might have noticed a few big omissions though so I’ll start with them first.

I only started collecting Noddy books in the past year and I don’t quite have them all yet. I’m missing two titles from the series of twenty-four – numbers 11 and 12 – Noddy Meets Father Christmas and Noddy and Tessie Bear. I’m still working my way through the series (and reviewing them as I go) so those two won’t be a pressing need until I’ve read the nine that remain.

Something else I’ve only started collecting more recently are the Famous Five Adventure Games from the 1980s. I still need four of the eight, though I found the others fairly cheaply in charity and second hand shops.

The other major series I haven’t completed is The Faraway Tree Series. I have the three primary works (The Enchanted Wood, The Magic Faraway Tree and The Folk of the Faraway Tree) and the ‘prequel’ The Queer Adventure (originally known as The Yellow Fairy Book) but I’m missing Up the Faraway Tree which is a picture-strip book. I must confess, though, that I haven’t ready any of those books yet!

The earliest edition and the one I’m least likely to be able to find.

I bought my first Brer Rabbit book late last year (My Brer Rabbit Book 4) and I haven’t even gotten around to logging a list of the rest of them, so I don’t know what I’m missing there. Maybe that’s best.

I don’t hold out hope of completing the Happy House Children Series as Benjy and the Others (the third title) is something I’ve never seen for sale even at an unaffordable price.

I’m lacking two of the Holiday Books (namely numbers 1 and 3). These are particularly hefty books so often the postage is quite high on top of the price of the book itself. I’m sure I’ll get them at some point,though.

Another problem with trying to complete a series (for me anyway) is when you have say, four of the eight (like I do with the Foyle Flower Story Books) but one’s a later edition lacking much of the original content. I can’t really count that book so I’m still looking for Daffodil, Poppy, Snowdrop, Water-Lily and Foxglove.

I need one Macmillan Story Reader The Magic Knitting Needles and Other Stories to go with the other seven I have. I don’t think I’ve seen this on eBay and it annoys me to be so close to having all the books but not being able to find the last one. 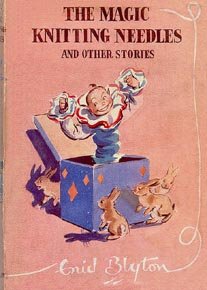 Similarly I have three of the five Macmillan Nature Readers. I still need The Rabbit’s Party and Other Stories and Susan and the Birds and Other Stories to finish the series. I’ve seen Susan and the Birds for sale a fair few times but for some reason it’s always priced a lot higher than what I paid for the other titles I have. It’s not even a series I’ve read so I’m not keen to spend £15 or so on one more book.

I also have the first two Treasure Trove Readers which means I need three more.

I’ve also got several series where I’ve only got one title (see opening comment about bargains…). Those would be Twenty Minute Tales from the Methuen Minute Books (I have three more to get), the third My Enid Blyton Book from the Marks and Spencers Books, Santa Claus Gets Busy from the six Wheaton Musical Plays, Nature Reader Five (only 35 Enid Blyton Nature Readers to go!), The Magic Snow-Bird from the Pitkin Pleasure Series (13 to go but I’ve only seen one or two in poor condition at high prices) and finally Trouble for the Twins of the 18 Brockhampton Little Books Series.

Some (I think five of six) of the titles from those Brockhampton Little Books Series are also in the Brockhampton Picture Books Series. I have 4 of the 12 picture books and I’m really not sure whether I’ll aim to collect all 12 plus all 18 from the other series.

I don’t have any of the O’Clock Tales books actually. Not an intentional decision, but just by chance I haven’t spotted any bargains in that series to start me off.

There are some stand-alone titles I’m missing too. The Birthday Kitten, The Adventures of Scamp, The Land of Far-Beyond and Tales of Green Hedges are the ones I’ve singled out to have on my list but I imagine there are others I’ve missed.

So a reasonably long shopping list there, but not an exhaustive one by any means. There are strip books like Bom, Clicky, and Mary Mouse, modern annuals and reprints, continuations, plays, song books and so so much more. I’ve also got a Pinterest board which has other titles on it (hopeless dreams, some of them.) It’s an impossible life-time’s work!

It would be interesting to know what you feel is missing from your collection, as I’m sure none of us realistically aim to collect everything with that familiar signature on it. If you did you’d end up with a lot of duplicated content (I’m sure I already have some stories multiple times across various collections) and you’d need a mansion not to mention a millionaire’s budget, so where do you draw the line?

This entry was posted in Personal Experiences and tagged Book Collecting, Wish List. Bookmark the permalink.