I did much better in reading the second book in the series, and read it over a couple of days this time. Again, I had picked it up quite naturally to read for myself and not for blogging which I think helped.

Last time I wrote The Barney Mysteries (or R Mysteries as they’re also known) are of a similar nature to The Famous Five, The Adventure Series and the Secret Series. They never venture too far afield but each book takes place somewhere new, during a holiday. And it turns out I wasn’t quite right. I had entirely forgotten that Rilloby Fair takes place within cycling distance of Roger and Diana’s home village. It’s also a bit more like a Find-Outers story, as it’s investigating crimes rather than falling into an adventure.

The basic premise is that there have been several unusual burglaries in the local newspaper. They are unusual as it is old papers and letters that have been taken, and there’s no apparent way a thief could have gotten in or out  – a series of locked-room mysteries. Roger, Diana and Snubby get involved because Great-Uncle Robert is staying with the Lyntons and he is an expert in old papers.

It’s Diana that has the big brainwave, about a fair being near the locations of the thefts and so they begin their ‘find-outing’ by visiting the fair and generally snooping around. Barney just so happens to be working with that fair, which helps! They’re even clever enough to predict the next burglaries, and are able to visit Marloes Castle before the crime is committed to do their research.

They also do Blyton-worthy midnight trips to the castle to try to catch the criminals in action, though in the end it is only Snubby and Looney who manage this as the others are laid up from eating dodgy fair sausages. 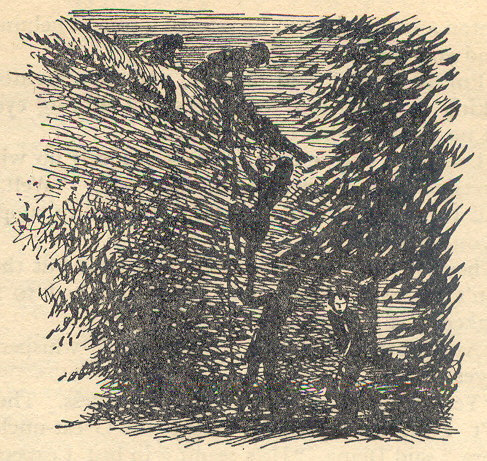 AND THE SECONDARY STORY

Running through the story is a sub-plot whereby Snubby, having met Great-Uncle Robert on a train and having no clue who he was, weaves a story about being on the run from the Green Hands Gang. Great-Uncle, being exceptionally clever about old documents and apparently very stupid about everything else, believes every word and so when green gloves do turn up amongst the clues he is most shocked. This makes it even more Find-Outerish as it is very like Fatty to stuff up Mr Goon with nonsense about red-headed delivery boys and such like. It’s also a little like the Find-Outers putting out fake clues for PC Pippin, then realising they have created confusion with a real crime. Snubby implies the made-up Green Hands Gang has something to do with the crimes, when the green gloves have an entirely different origin.

I’m sure I read this when I was much younger and I didn’t work out who-dunnit or indeed how-dunnit then. Reading it this time I knew who the actual thief was (but I couldn’t remember exactly who was or was not the mastermind) so I could see the careful laying of clues and hints along the way. Blyton may get a bad rap for her writing, but you can’t accuse her of presenting a solution to a mystery without having laid the plans for it first.

I remember spotting it first when the children talk to Barney about the fair-folk, and if anyone would have the knowledge to steal valuable documents. They also ask him if anyone collects things, like antiques, for example, and he tells them someone collects toy animals. He doesn’t believe this to be of any consequence, it’s a throw-away comment as it’s a laughable notion that the collector could be a thief, and yet it turns out to be an important clue later on.

I won’t tell you who the thief is, but if you want a clue and don’t mind a spoiler: the thief and solution are also used in Five Are Together Again. (But not half as well!)

I wouldn’t say we see much in the way of character development again. Diana at least gets to be the clever one on occasion, and Roger makes the most of a Julian-like tendency of ordering her to go/stay home and be out of the way of any danger. Snubby is the same as ever and is quite lucky that his silly stories don’t reach Mr Lyton as he is a surly character prone to thrashing children who don’t behave! It’s very 1940s but I find him quite unlikeable, really. Uncle Quentin at least had a scientific temperament as an excuse – he would blow up and then forget all about it. Mr Lynton is much colder and more calculating, and doesn’t seem to relish his own children’s presence half the time!

We get a little more insight into Barney’s life during the book, as he thinks about how he doesn’t really belong anywhere. He knows that he and Snubby both have lost their parents, but he feels that at least Snubby ‘belongs’ with the Lytons, where as he has nowhere he can call home.

I enjoyed re-reading this one. It’s a clever mystery with a satisfying solution, and while the characters are not always hugely memorable they are generally likeable.

Next review: The Rubadub Mystery

This entry was posted in Book reviews and tagged The Barney Mysteries, The Rilloby Fair Mystery. Bookmark the permalink.

2 Responses to The Rilloby Fair Mystery