If you like Blyton: Frozen in Time by Ali Sparkes

Posted on September 9, 2016 by pippastef 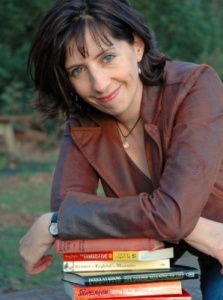 I suspect that a lot of you have never heard of Hampshire based authoress who turns up for her public appearances in amazing sparkly boots (the clue’s in the surname). Last month I had the fortune of Ali Sparkes coming to my library to do a creative writing workshop with some children and I discovered that she was a big fan of our favourite author, Enid Blyton. In fact, so much of a fan that one of her books, Frozen in Time in a way pays homage to Blyton and the Famous Five. So I decided I needed to read this book, and now I’m going to share my thoughts with you.

We begin to cross over into Blytonian territory as we meet two children, who are helpfully brother and sister, Ben and Rachel, who are having a very boring summer holiday. Sound familiar?

Their parents are away, working on a cruise ship, and they’re being looked after by an Uncle Jerome who is more interested in his scientific projects than his niece and nephew. Sound familiar?

Anyway, enough of the comparisons, let’s look into the adventure that awaits our heroes Ben and Rachel and their forgetful Uncle Jerome. When the rain finally clears, the two children rush outside and explore their overgrown garden where they discover a sealed chamber and manage to get in and explore. The discovery is more than diamonds, smuggled goods or a kidnapped child. In this sealed chamber there are two cryogenically frozen children and puppy from 1956 (we’re now in 2009). That would be fifty-three years suspended in time for the children, Polly and Freddie who get woken up when Rachel accidentally pushes a button while Ben and she are looking around. 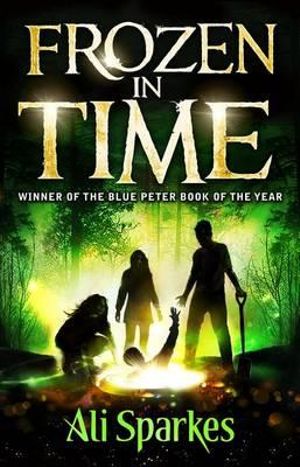 What follows next is the hilarious escapades of trying to bring Freddie and Polly into the 21st century and work out why their father left them frozen for fifty three years. This is where we get into Five Find-Outer territory as we deal with a big mystery trying to be pieced together with some interesting Cold War connections. Such a thrilling read.

The classic set up of two girls and two boys and a dog dominate the book and the scatty uncle in the background in a very Famous Five, Five Find-Outer situation. So let me introduce you;

First of all we have Ben, the eldest, well if you don’t count Freddie’s extra fifty-three years. He’s Rachel’s older brother and there are a couple of very Julianish moments where he tells her that he has to do something first because he’s the eldest. Due to his knowledge of the twenty-first century he comes across as older and wiser than Freddie.

Rachel could be seen as the tomboy of the group, the George figure if you like, but that would only be in stark contrast to Polly who is an Anne if ever I saw one. Whereas Polly likes feminine things and getting things tidy and prepped for the boys, Rachel can’t stand waiting on her brother and says that she’s only doing it to help Polly adjusted to the new time she’s found herself in. Fair play, but some of those habits are probably going to do Rachel some good.

Freddie next, and he’s the older brother of Polly, archetypal in his Julianness, an older brother used to being in charge and the first to really acclimatize to his new surroundings before his sister Polly. He is the brains of the outfit in rather a older brother way, and he has good brains.

Last but not least Polly, the perfect 1950s housewife in the making. She misses her father and can’t work out why he would leave them frozen in time if he didn’t have a good reason. She loves setting the table and playing house and looking after her brother. If anything she is the Anne of the four, even though she’s as brave as anything. 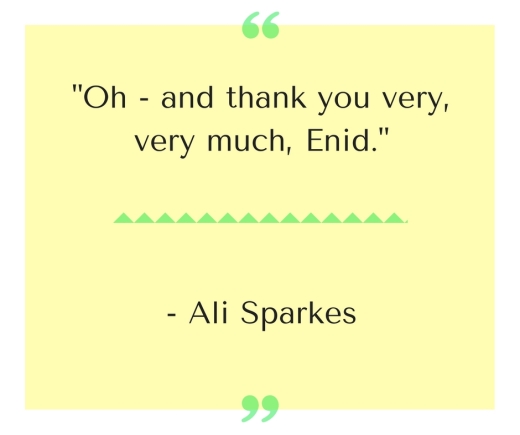 If you want to try someone knew, who loves Blyton and does a wonderful job of mixing the new with the old you need to read this book. The sci-fi element is a good twist on an old story, the mystery harks back to John Le Carre’s spy thrillers, and the wonderful freedom of the children wandering around the Hampshire countryside is a beautiful homage to the much loved Blyton. Ali Sparkes has done an amazing job with Frozen in Time, which was published in 2009, and I am surprised that no one had shown this book around to the Blytonites out there. Oh and can I just add, it was the winner of the Blue Peter Book Award of the year? How good is that! A nice little touch is in the acknowledgements at the beginning and  the last line says:

And thank you Ali for such a wonderful story and a wonderful tribute to our beloved Blyton. This one is definitely a re-read!

This entry was posted in Book reviews, Other Authors, Reading Recommendations and tagged Ali Sparkes, Blue Peter Book Award, Frozen in Time, If you like Blyton. Bookmark the permalink.

3 Responses to If you like Blyton: Frozen in Time by Ali Sparkes