The Adventure Series on TV – The Woods of Adventure

The Woods of Adventure? I hear you ask. No, this is not a long-lost Blyton title you’ve never heard of.

I’m not quite sure how all the copyright laws work, but earlier in the 90s there was a mini-series make of Castle of Adventure and so they still had the rights to that title. There was also a version of Island of Adventure in the 80s but those rights must have been available again for this series. Confused? Good, so am I.

The blurb for this episode reads:

The children and Mrs Mannering take a trip to a mysterious mountain cottage, which lies close to an old castle. Curious about the ruin, and eager to find a tawny owl nesting in it, the children explore the surrounds. When Kiki goes missing Jack is determined to find her and searches the surrounds, but he is alarmed to discover that they are not alone and soon alerts the other to get help.

The opening shows us a sign reading Woods Castle, keep out. In the background is a Monty Pythonesque drawing of a castle superimposed on the blue sky. A man with a rucksack is sneaking about, apparently being followed by some sort of heavy-breathing animal. Ah, no, it’s a white-faced man in dark purple robes. Gosh isn’t it amazing how those types always turn up to ruin your illicit wanderings around old castles (or ‘secret’ islands)?

An older woman bursts out of the castle as the hiker is attacked and seems very upset by it all. Though it turns out she’s not upset about the poor young guy who gets his head cracked open, she’s more concerned with the crazy monk-type. She is seen tending to him by candle-light later and he is mumbling about Margaret whoever she may be.

Bill is getting involved from the start of this story, with his boss showing him a picture of Craggy Tops, where a man has been murdered. (The man being the hiker from the opening). There is talk of radiation being involved.

Interposed with these threads of story are short underground scenes of a sci-fi nature, with men in radiation suits.

Having heard an owl from their tent the children end up in the woods by night, then right by the castle. They get scared off by the monk, though.

The old woman is the monk’s mother and he has been unstable since the death of Margaret. Even crazier… a man with the old woman seems to call her Mrs Brimming. Even The Secret of Moon Castle didn’t have a Mrs Brimming. The sci-fi radiation stuff is going on under the castle as Mrs B’s friend is monitoring it all on a computer (while eating jelly babies). They talk, and reveal that the monk, who turns out to be named Gary, was badly burned in trying to save Margaret. 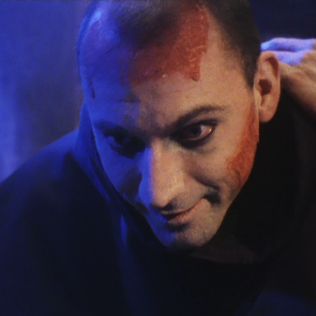 The children are still suspicious of Bill when he turns up, because he is pretending to be on holiday but Dinah sees him with a gun.

The children visit the castle again, and after about ten pointless minutes of wandering around, Kiki ends up inside with Gary who has taken a shine to her. This gives Bill a perfect excuse to come up to the castle and snoop around. The children are the ones that end up getting a ladder and climbing in at the broken window, however (while Bill and Allie wander uselessly around the outside of the castle). Naturally the ladder breaks just as the last child makes it inside, leaving them trapped with a lot of rats.

It’s Mrs B who finds them eventually – after another pointless ten minutes of wandering – not surprising as they are doing some of the worst hiding ever behind curtains and so on. She hurries them all out and back to Mrs Mannering again.

The radiation levels are being monitored by the mystery man and they fluctuate wildly. When they get high the children have to cover their ears at the horrible noise. Even Bill and Allie hear it from outside but can’t work out what it is. As the children also point out, there are no warning labels of any kind on the radioactive material they find later. Though as they look like cheap metal rods that’s not so surprising.

THE HUNT FOR KIKI

Jack is still distraught about Kiki and so goes off in the night to try to find her. The other children follow and they end up inside the castle again. And we then get another ten minutes of the children running about the castle. Them chasing after Gary. Gary chasing after them. It felt more like Scooby-Doo than Blyton.

Gary mistakes Lucy-Ann for Margaret and expresses feelings of guilt, yet still fights with Jack over Kiki. I was rather losing the will to watch by this point but the kids got Kiki back eventually, helped by Bill.

Jack and Lucy-Ann had heard from their uncle during the episode and he was reluctantly coming back from the US to take care of them again, but they didn’t want to go. This is dealt with at the very end of the episode when he comes down with some illness and can’t travel for another few weeks.

The ‘plot’ of this more like Moon Castle than the plot of Moon Castle was, and nothing like Castle of Adventure at all. Really they should have just done seven episodes and left this one out. They stole so much from Moon Castle that the actual Moon Castle episode made a year later clearly had to be massively changed otherwise it would have been far too similar. For example, the picture below is of a portrait with glowing eyes which backs onto a secret passage. 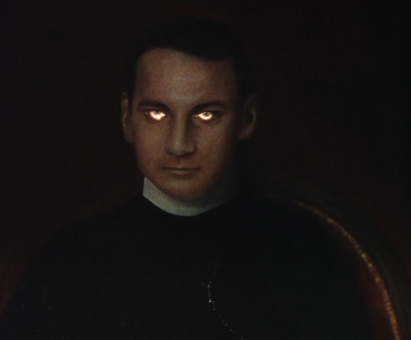 There was barely enough material to have a twenty-five minute episode, let alone one that went on for more than an hour. Bill was completely under-used and the whole radiation work under the castle had next-to-no point other than having someone complain constantly that Gary was out of control.

I don’t understand why these New Zealand adaptations keep feeling the need to add strange men/women in hooded robes to the stories either.

I would give this zero stars if I had to rate it, and I wouldn’t feel bad in the slightest as there was nothing even remotely Blyton about any of it.

And lastly, I’m annoyed that the blurb and the title were misleading! There’s no rented cottage at all, they are at Craggy Tops the whole time. Worse is the fact that the woods barely feature at all, only as something they have to walk through to get to the castle.