The Adventure Series on TV: The Castle of Adventure, part 3

The previous episode ended on a cliff-hanger (almost literally) as Dinah plunged from a tree into the enormous moat around the castle. I’m fairly confident that she will be OK, however, given that she is unlikely to disappear from the rest of the episodes due to injury or death.

Kiki is the first to react to Dinah’s fall, squawking the above before the two boys race to shimmy themselves across the tree too. Thankfully they don’t lunge off, and Dinah has not plummeted very far, she’s just hanging from a tree branch below. 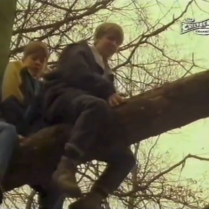 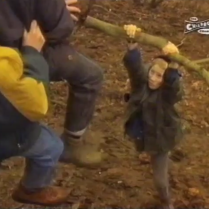 Don’t just sit there grinning, get me out of here!

LYING IS NOT VERY BLYTONISH

Blyton’s children have always had that strange moral that as long as they don’t outright tell a lie then it’s ok. If asked are you going to the castle? they couldn’t lie and say no, but if asked where are you going? they could say out for a walk, and leave out the castle part quite easily.

We don’t always tell our mum what we do (Dinah)

You mean you tell her lies? (Tassie)

But later, they do tell what I think are actual lies. Lucy-Ann starts telling Mrs Mannering they are going for a walk because Jack thinks there are eagles nesting up in the ca. She is cut off by Dinah saying copse before she can finish saying castle. So that’s one outright lie!

Dinah then adds that they need rope for climbing trees which is not quite the full truth – they need it to help in getting from a tree into the castle.

Philip then lies that Tassie won’t be with them as her mother’s told her not to go… and they make a huge production of scrambling away from further questioning when all Allie wanted to know was if she had to make more sandwiches. But Philip has already seen Tassie and knows full well she is coming!

I don’t really like how the kids treat Tassie in this version. It seems like they are using her just to get near the castle against her wishes. There’s not really any play or chat between them to imply friendship. Somehow it seems nicer in the book, even though there Tassie is totally awestruck and follows them around! On TV they’re not even concerned when she disappears again at the castle, but later they say they looked for her for ages (which may be another untruth as it wasn’t shown to the audience).

Even Lucy-Ann gets in on the Tassie-bashing when she says Oh come on, Tassie, you’re so boring when it’s clear that Tassie isn’t comfortable going to the castle.

Jack’s a bit nicer to Tassie at least, he tries to get to the bottom of her fears about the castle in a considerate way.

The mystery around her does deepen in this episode, though.

There’s more gypsy magic as Tassie says her mum has ‘second sight’ and knows what’s about to happen. Philip says this must also be true for Tassie who must be able to “see” a way into the castle. (Another example of them being a bit mean to her).

And then there’s her relationship with Sam. She does declare that he’s not her father, she doesn’t have a father, but…

SECRETS AND LIES AND THREATS

Sam shows his true colours in this episode when he comes to ask Tassie’s mum where Tassie is. He is very aggressive and threatening towards her – I just knew he was up to no good. He goes on for quite a while about how Tassie shouldn’t be wandering about, espeically near the castle and how she is hanging out with those kids. Makes you think he’s putting on that friendly visitor face just to keep an eye on what the Mannering/Trents are doing.

Coincidence or not but Philip had started behaving more suspiciously of Sam earlier in the episode. He certainly didn’t want Sam to see him and Jack taking a plank and rope out of the shed at Spring Cottage but that might have been in case he told Mrs Mannering about it.

NOW FOR THE MAIN EVENTS OF THE EPISODE

This episode focuses on the challenge of getting inside the castle (finally!). Tassie uses her ‘second sight’ and finds another log across the moat behind a wall of ivy.

The castle doors have been recently oiled and there’s an apple core been dropped outside too. This is a bit of a shame as in book they’ve no idea other people are around until it’s too late. This lot seem to be willingly walking into danger.

Tassie finds a possible way in – up a small tree near a window, but disappears without a word while the other children were looking the other way. 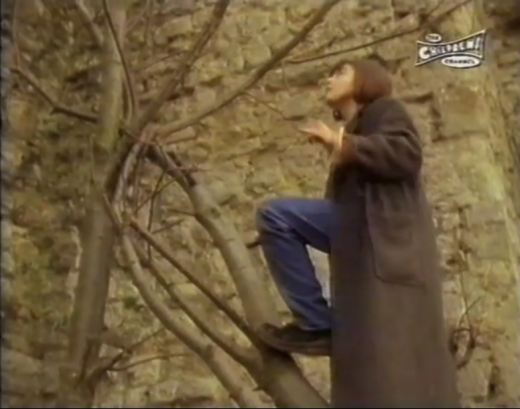 Dinah and Philip argue about how to get in etc, meanwhile Sam is coming closer in his horse and carriage… and looking very suspicious though it’s not clear how close he gets to the castle.  Though it’s decided they’ll come back the next day with equipment.

They do come back and manage to get in at the window with a plank and rope, so fairly similar to the book really, and Dinah gets covered in cobwebs inside (but it’s Lucy-Ann who screams).

The girls then go to set up a picnic on the rather well manicured lawns, while Jack and Philip keep hunting for the nest.

And the inevitable cliffhanger: Jack is climbing up the ivy covered tower to see if there’s a nest at the top and is attacked by the eagle.

This series has been slowed down by ‘going to look at castle’, ‘coming back the next day and walking up to castle’ ‘returning next day to get into castle’. It might have worked better as 6 episodes and a bit more pace, I think.

Then there’s the daft slap-stick moments. Philip sees Sam and thrusts the plank back into shed and – by the sound of it – knocks Jack flying. On their second attempt Sam comes along again and Philip pushes Jack back, Jack then pushes and pushes leaving Philip jerking back and forward at the door, to which Sam does a little dance. After lugging the plank up to ‘the witching tree’ Jack pretends to faint/collapse so he can then jump up and scare Philip.

And there’s another scene where the henchmen talk on their radios about whether or not it’s lunch time.

Of course not every part of Blyton’s books were high-action but the in-between bits here fall a bit flat. They certainly lack the charm of the original!

Then there’s the problem of the extremely clumsy children who seem lucky to be alive mostly. We had Lucy-Ann falling down a slope in the last episode, and here it is Jack’s turn. Yes it’s muddy and his foot slips but there was no reason for him to tumble all the way to the bottom.

And then their otherwise perfectly good version of  ‘plank through window’ access to the castle is spoiled by Philip half-falling off.

I wouldn’t say Jack being attacked by the eagle is exactly clumsy – but it’s a bit stupid to climb an exposed wall to a nesting bird surely?

They seem determined to add as much drama as possible to each episode anyway and unfortunately that seems to mostly involve people falling over for no good reason!

They are playing videogames at Spring Cottage! But interestingly it’s the girls who are playing, and Lucy-Ann is brandishing one of those gun-controllers. 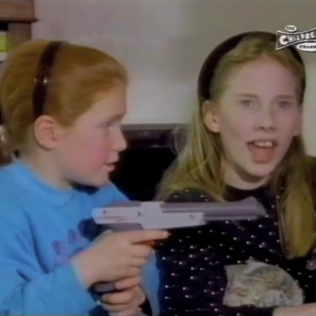 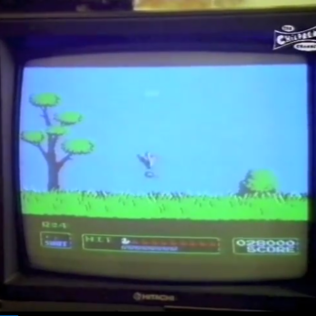 But later there’s very much a boy/girl divide as the girls are at home making sandwiches while the boys get the equipment ready.

So there we go, third episode of eight and we’re finally in the castle. Some elements are good – I’m glad they’ve kept in the plank into the window for example and some good arguments between Dinah and Philip.

Saying that there’s a bit too much padding and delaying through all the episodes. The source material is so good so it is a shame to waste so much time on Sam and other nonsense.

1 Response to The Adventure Series on TV: The Castle of Adventure, part 3