Here I am continuing to look at The Zoo Book, Blyton’s non-fiction book about London Zoo and its animals.

The first chapters covered the zoo’s history, how animals were caught for the zoo and some secrets of the keepers. It did not all make for pleasant reading!

Let’s see what the next few chapters bring though… 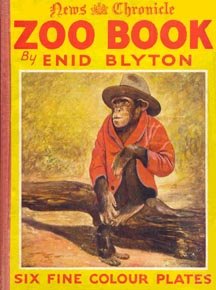 Primarily it gives a bit of a description of each type of monkey/ape, where they live, what they look like and their behaviour. I imagine loads of readers would never have seen half of these creatures before!

A couple of anecdotes are thrown in too, some nicer than others!

One of a signalman in Africa who lost his legs and trained a baboon to pull the levers and push the carts for him – certainly less usual than a golden retriever!

Then there was Sally, the chimp, who could count to five accurately and sometime higher. Quite different from zoo animals now who are encouraged to be as wild and natural as possible. 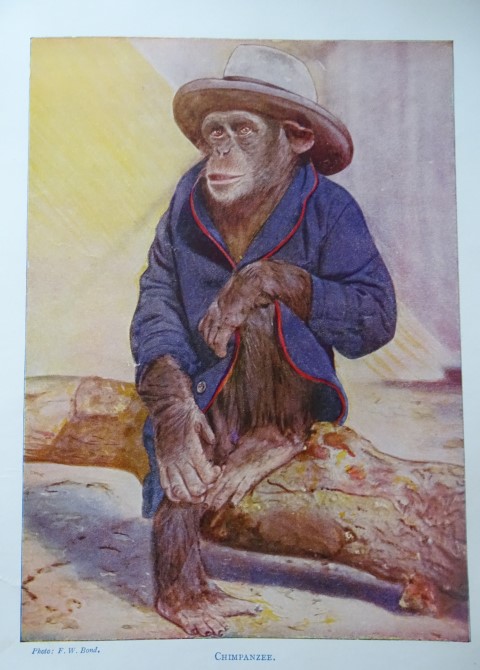 Also mentioned is an orang-utang who used to knock down the sign saying “do not feed” as he worked out he got far less from the public when it was up! Amusing, but then added on is the reminder that orang-utangs rarely lived long in captivity.

As with the last chapter this one gives details of the main bears – polar, brown, grizzly, black, bears of India and China (individual types aren’t mentioned, but sun bears perhaps?) racoons (now more commonly spelled raccoons, and which aren’t actually bears they are procyonidae), and the sloth bear.

One of the polar bears will sit back and wave his hand at you if you will wave your hand to him. he will wave both his hands if he thinks you are going to give him a bun!

And then a truly horrible one:

Grown-up polar bears sometimes live for quite a long time in captivity. Sam and Barbara were at the London Zoo for many years. They had about twenty cubs, but none of them lived longer than three weeks. Sam ate them, and Barbara ate them. Then Barbara carried another lot into the cold air and left them to catch cold in a puddle. Another time the cubs were given to a collie dog to mother,but even these died. Our climate is too warm for them, and they catch cold so very easily that it is almost impossible to keep them for very long.

I mean this is a book for children. I know wild animals often eat their young but in the wild it’s more natural if they were under threat etc. It seems barbaric in a zoo to let an animal have so many young when they must have known they wouldn’t survive.

The tragic Sam and Barbara

Not so horrible but rather blasé about a dangerous event Blyton says it was All most thrilling when Barbara escaped on a foggy morning. Certainly would have the adrenaline going in the staff but it could hardly have been fun!

The brown bear is famous for its circus performances as described:

Have you ever seen a dancing bear led by a rope? He usually carries a pole and dances clumsily on his hind feet. He is almost always a brown bear who has been captured and trained to help his master earn his living.

Of course left out is how painful the rope-leading is. How a hole is made in their face for the rope, how their teeth are pulled out or filed down to make them safer… I can only hope that Blyton was being truly naïve here and didn’t know those sorts of details.

Blyton starts by likening pet cats at home to lions etc, comparing their eyes, paws, whiskers and so on which is clever, as most readers would be familiar with a domestic cat.

Lions, being the king of the cat family come first and get probably the most text. The are found in Africa and Persia (that dates the book just a little bit) and without manes in India. Having done the tiniest bit of research myself (ie Google and Wikipedia) it becomes clear that the Persian and Indian lions are the same type – Asiatic lions who have much smaller manes but manes are still visible.

Also seemingly inaccurate is the description of how the lion kills. All the way through he is used, and while I know that Blyton would use he to mean a whole species, it makes it sound like the male kills animals solo and drags them back to eat. However we all know that lions tend to live in packs, and in those cases the females do the hunting together. Obviously there are some male lions outwith packs who will do their own hunting but Blyton fails to mention lion packs or female lions at all.

Then there’s this rather nasty story:

Sometimes jackals find the half-eaten body and joyfully set to work to finish it. If the lion finds them there when he himself wants to eat he is very angry, and it is said that, to punish the jackals, he will catch one and bite off all its paws.

Is that really necessary for a children’s book? Again, animals hunt and kill each other in nature, that’s totally appropriate to describe educationally. That bit just seems unnecessarily gory especially when it’s all about revenge. I wonder if this is a true story or just a folk-tale. I would love to know her source for it anyway, as I couldn’t find any search results online to back it up (though I didn’t spend a long time looking.)

The tiger is stronger and braver than the lion (who got a bit of a hard time actually, being described as a coward etc!)

Some bad attitudes are exposed here as the tiger does a tremendous amount of mischief. He will steal cattle cay after day, and should he have the chance of tasting the blood of a man, he will become a man-eater, and watch and wait for chances to pounce upon and carry off any man, woman or child he sees. Some tigers have eaten dozens of natives and terrified whole villages for months.

I find the last part very hard to believe though it’s not unheard of for tigers to kill people. But tigers are not mischievous or bad… they are simply doing the smart thing and going after the easiest prey.

Tiger hunting is tremendously thrilling… says Blyton, and she describes ways of catching and killing tigers. These include blinding a tiger by covering the path with leaves covered in glue. And then putting him out of his misery, as if that negates the cruelty of the earlier acts!

Blyton does correctly say that panthers are actually just black leopards, something which doesn’t always seem to be commonly known today. But apparently these black leopards are very savage and almost impossible to tame. Surely all leopards, or indeed all wild cats, would be pretty hard to tame?

Another quite sad anecdote about zoo animals:

There are two  [leopards] at the Zoo now at the time of writing. One, the smaller of the two, ill-treats its companion terribly, as can be seen by the bare patches on various parts of the body and tail.

Really sad that they couldn’t think of separating the two or enriching their lives to reduce the bullying.

Not quite as depressing as the first chapters, really.

I would love to know some of the sources for the information given, though. It’s hard to tell if the information was considered common knowledge then, and has been corrected since, or whether she had bad sources.

One thing I continue to be surprised at is her pedalling of bad attitudes to wild animals. She frequently describes them as mischievous, destructive and implies they are basically trouble and deserve to be hunted (potentially to extinction) to protect human endeavour on farms etc. That doesn’t sound like the Enid Blyton I know and love.