The Adventure Series on TV: The Castle of Adventure, part 5

We ended on a less-dramatic scene in the last episode (I hesitate to call it a cliff-hanger, actually) with someone – Bill? MOD man? Sam? someone from the castle? prowling around Spring Cottage.

SO JUST WHO IS THE NIGHT-TIME PROWLER?

Whoever he is, he has incurred the wrath of Kiki (who is caged!) and the geese outside. They wake Philip who has a look out of the window, causing our prowler to get a warning from his partner waiting in a van.

And I was right. The prowler is Bill. Goodness knows what he’s doing sniffing around Spring Cottage in the dead of night. It would certainly make someone unfamiliar with the books suspicious of him.

He then turns up in town the next day and bumps into Allie, telling her he’s just doing some business, but would like to visit them at Spring Cottage soon.

The children plan for Jack to secretly stay at the castle overnight (how they thought Allie wouldn’t notice, I don’t know) and for that he needs food.

They therefore sneak all the slices of bread from the breakfast table and hide them in their waterproof coats… and then the boys raid the kitchen while Dinah keeps Allie occupied. But then Allie says she’ll make them a picnic and they have to sneak all the food back practically under her nose… 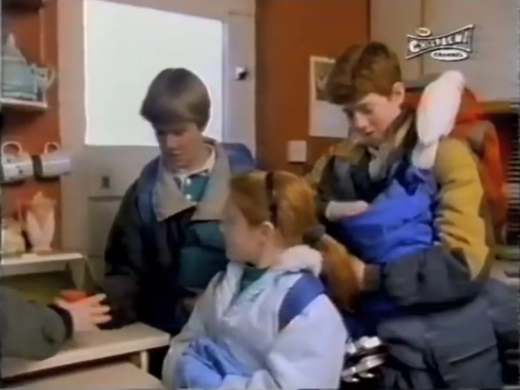 Tassie has similarly bad luck, she is caught by Sam when she tries to meet the children and we don’t see her again in this episode.

And the worst time is for Allie as she get another call from Jane – her mother has collapsed and is in intensive care.

Curious for the children is how Buttons turns up without Tassie, and manages to get inside the castle again.

Curious for me is where the children have found what look like ready-made panels for Jack’s hide. 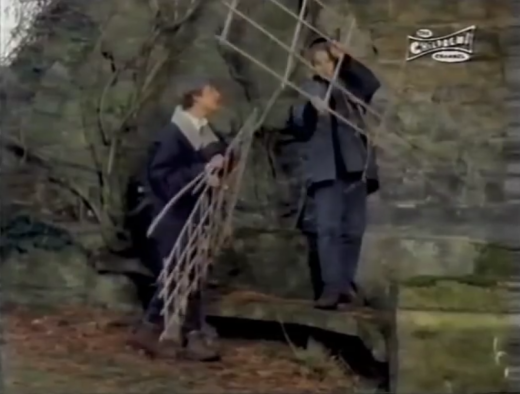 And finally, we get to the good stuff.

Jack is left overnight and has a chat with himself that if he can’t get out of the castle then no-one can get in. Unless they find the plank. Which they won’t, in the dark. So that’s all fine, clearly.

Being the 90s the children can’t possibly be left alone, so Aunt Jane (I assume from Mannering side, or perhaps she’s an honorary aunt) comes to Spring Cottage to let Allie go to her mother

Jane is not at all happy that Jack is camping out overnight, but she is persuaded into waiting for the 10pm flashes with the children. The signal comes in, exactly as promised, and they reply… but ten minutes later we see Jack going to signal. 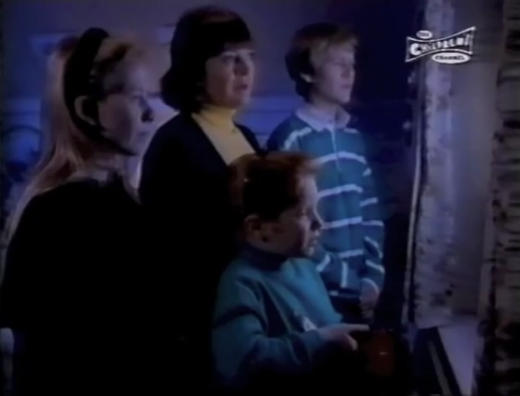 So… someone else in the castle just happened to need to signal with the same pattern at the same time as Jack should have? It’s pretty pointless, really, as Jack’s OK at this point. It’s not like he’s already been captured and prevented from signalling or anything. The children getting the wrong signal, and Jack not getting a reply to his, doesn’t have any impact on the story whatsoever.

Anyway. There’s then some strange noises in the castle and Jack finds an open cellar. There are suits of armour down there, which gives me hope for later in the story. There’s also a whole lot of high-tech things there too, though. None of this old-fashioned  ‘table of blueprints is all we need’ attitude. 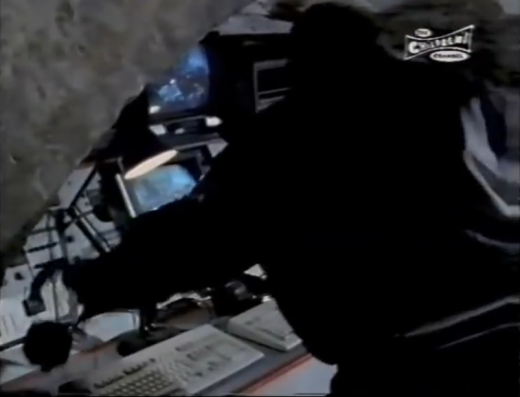 We meet a couple more of our enemies now, one of whom is the chap who escaped Bill’s colleagues by going into the ladies. Their presence means Jack has to hide, and gets shut in the cellar. Unfortunately it is not a charming grating stone operated by a hidden lever. It’s a hydraulic door which you wonder how the children missed – though you do pull an axe on the wall to operate it.

Next to appear is Allie’s friend from the MOD. No surprise that he’s a baddie, really.

Jack lets himself out of the cellar and decides it’s time to make his getaway. Fair enough. But instead of quietly sneaking out he does it in a pell-mell fashion, and just about breaks his neck when he knocks the plank down. Yes, the plank they securely tied onto the tree because one of them nearly fell first time they entered the castle.

And we’re left on another cliff (castle) hanger, as Jack dangles out of the window. 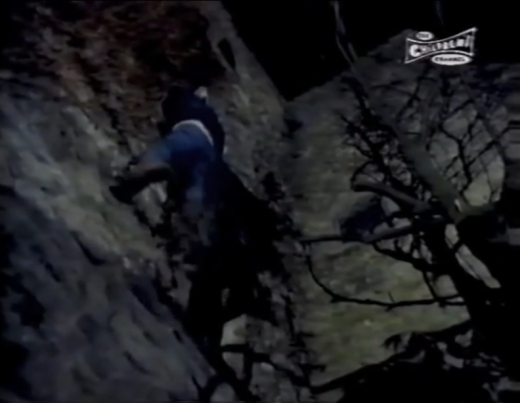 I’m glad that things finally start to happen in this episode, but bearing in mind that we are now 120 minutes into a 200 minute adaptation, we’ve had to wade through a lot of padding to get here. I wonder how rushed the remaining 80 minutes will be, or whether they plan to greatly simplify everything.

5 Responses to The Adventure Series on TV: The Castle of Adventure, part 5