The Mystery of the Vanished Prince 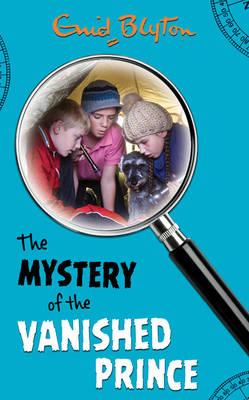 If you asked me ‘Do I want to read this book?’ my honest answer would be another question; ‘how much do you like Enid Blyton?’ because that is basically the reason I sat down and read this book. If it was by anyone else, I would have just not finished it. Let me explain why.

Fatty dresses the others up as foreign nationals from Tetura because there is a prince from there staying at a local campsite. Ern Goon, along with twin brothers Perce and Sid are staying in the adjoining campsite, and are completely taken in by Pip, Bets, Larry and Daisy dressed up like the prince. Bets pretends to be the Princess of Tetura and takes Ern and fools the others completely.

It even takes Mr Goon in, and he reports the Princess’ appearance to Inspector Jenks when the news about the prince vanishing breaks. Fatty then has to come clean to Jenks about the trick and, for once, gets a super ticking off from the inspector who doesn’t think its a good thing for him to have done and wants him to apologise to Goon, and promise that if they hear anything about the vanishing prince to let Goon know.

Fatty and the others apologise, and Goon just pooh-poohs the idea of them helping and won’t even listen to their findings. I mean that’s just stupid, he lets his opinion of the Find-Outers rule his common sense and treats their information with disdain. To be completely honest I’m not sure how he hasn’t already lost his job, because he’s so bad at it. It really makes a mockery of the whole police system in a way because Goon is being shown up by a bunch of children, now no one wants that. At least with the Famous Five, they stumbled on to mysteries and then once the police got involved they were no longer allowed on the scene and they were always perfectly respectful to members of the law and quite rightly so. The Find-Outers don’t seem to have that respect for anyone who isn’t inspector Jenks, which doesn’t send a good message to those reading the books.

One of the other issues with this book is that it takes so long to get to the mystery – AGAIN. This must be the third book or so where things haven’t really kicked off until the second half of the book and it contains so much clutching at straws its hard to believe. Nothing really makes this mystery go until the children manage to get some sense out of Sid Goon, whose mouth has suddenly become unstuck from all the toffee he’s been eating and he admits to having seen something in one of the families caravanning next door to the Goon’s camp.

My last complaint is that it happens all in the last couple of chapters. Goon gets shown up, even though had he listened to Fatty, he wouldn’t have a problem, and the children once again rescue the prince and save the day and the inspector isn’t the least bit mad at them for that. I mean yes, they helped, but still they wasted police time at the beginning of the mystery. Honestly, I don’t think I can take much more of the ‘Oh you children and Buster are all so great. Frederick please grow up quicker so I can have you on my team’ mantra. Frankly my dear inspector, if you were any good at your job you’d have figured it all out and fired Goon.

When the story actually gets moving the clues start pouring in, the mystery isn’t actually a bad one. It’s a style which Blyton hasn’t really used before, but can been seen in some of her contemporaries’ work, such as Agatha Christie, who uses classic misdirection in many of her stories. It’s a nice way to turn a mystery that really didn’t have anything going for it into a credible finisher. Fatty of course has to come out trumps as usual, but that aside, the rest of the Find-Outers do put their money’s worth in to help the situation.

The arrival of Ern is not nearly quite as bad as the first book he was in, he seems to have grown up and matured a bit, even though he is still a bit of a nit, but then he’s refreshing to have instead of Fatty. So it’s nice to have him around.

Pip really blows the mystery wide open by finding a clue that Fatty dismissed as clue in the first place, the button from the prince’s pyjamas. So I’m a fan of Pip this time around.

Anyway, it’s hard to feel the good in this one, I really didn’t get on with it. Let me know what you think in the comments!

Next review: The Mystery of the Strange Bundle

This entry was posted in Book reviews and tagged Ern Goon, The Five Find-Outers, The Mystery of the Vanished Prince. Bookmark the permalink.

3 Responses to The Mystery of the Vanished Prince