Recently I started putting these books in order of favourites, and I did my top five from the series. Now I’m going to have a look at the five books I am putting in the middle. My middling favourites, if you will.

6. The Mystery of Holly Lane

This is one I didn’t read as a child. As an adult I thought the mystery was satisfying enough but I found it quite forgettable (but I’m someone who can read the same book twice in four years and still not remember whodunit. From what I do remember it had a good final solution and some interesting characters. What I found the most memorable is the foreign chap at the start with who is looking for Grintriss, thus accidentally showing the Find-Outers the area their next mystery will be in. 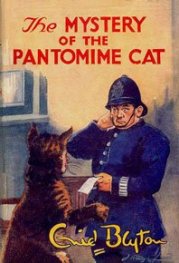 7. The Mystery of the Pantomime Cat

This book benefits from the introduction of a new police-man, PC Pippin, and the Find-Outers revel in giving him a false mystery to solve. Fatty does some of his red-headed boy shenanigans, but the main mystery is a serious one. You feel sorry for Boysie and Zoe as they’re clearly good people – but there are plenty of suspects who may not be so nice. The ending is a bit rushed as we suddenly get given a new piece of information that solves the mystery. If we’d had it before it would have been solved much earlier.

8. The Mystery of the Disappearing Cat 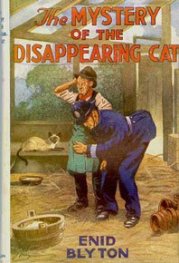 On the whole this is a decent mystery, almost an impossible one given that the cat’s there one minute and gone the next. Miss Trimble (who will pop up again later) is perhaps one-dimensional but her dimension is at least an amusing one, while Tupping is someone you enjoy hating. Proving Luke’s innocence (and Tupping’s guilt) gives the story an edge of tension, though the majority of it plays out between the Hilton’s garden and the one next door so it can feel a bit insular and restrictive at times.

9. The Mystery of the Strange Bundle

This is another story where Goon violently thrusts the clues at the Find-Outers, in this case tiny, soaking clothing down Fatty’s back. If you can get over that stupidity, you can appreciate how strange the mystery is. Why has someone thrown a bag of tiny clothes into the river? Who is Eurycles? How do those things tie in with the burglary at Mr Fellows’ house? The Find Find-Outers find out all these things between funny interludes where Fatty practices his new skill of ventriloquism and drives Goon mad.

10. The Mystery of Banshee Towers 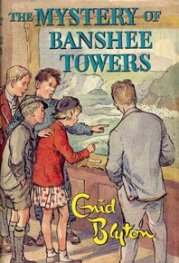 This is the worst of the series according to most people, perhaps one of Blyton’s worst books over all. I’m inclined to agree that it is not one of the strongest mysteries, as it relies a bit too much on a phoney banshee which the Find-Outers should be smart enough not to believe in – plus the various errors in continuity. Saying that I have a certain amount of fondness for this book, which is mostly nostalgia combined with the memory of how long and hard I hunted for my hardback. I can’t dislike a book I worked so hard to get!

I think Banshee Towers is probably my most controversial choice this time around, particularly after the comments on my previous post. I’d be interested to know just how far down other people’s lists it would appear.

7 Responses to Putting the Five Find-Outers books in order, part 2