Inscriptions in books 2: this book belongs to

I’m not one for writing my name inside books. I’ve done it on a few over the years, or for a while I had little stickers, but I rarely felt the need to declare ownership. Perhaps I would have if my sister had been a threat to my collection but she had her own interests and only read a few of my books. We managed to share other books (like the Babysitters’ Club series) without serious arguments.

What’s in a name?

Some children simply wrote their name inside their books, perhaps at their parents’ request, to make sure they found their way back if lent to friends or left at school.

James Bramble wrote his name in Plays for Older Children and Mary Ann Binny wrote hers in The Secret of Killimooin.

Kay Reed used a stamp to put her name in The Book of Fairies.

Sheila Gambles wrote her name on a scrap of blue paper and stuck that into Come to the Circus.

The Mystery of the Burnt Cottage belonged to Lynne Groves, Six Cousins Again to Kerry Shackleton and Five Have Plenty of Fun to Moira Jackson though her name was so faint it was hard to make out.

Martin, Susan and Lesley equally shared Well, Really, Mr Twiddle! and the name Sandra Foley Suzanna Steven (which I assume is actually two names) is in The Mystery of Tally-Ho Cottage.

Five Go to Smuggler’s Top, Five Have a Wonderful Time and Five Fall Into Adventure all have my mum’s name in them, and the last one also has a pretend library lending pocket stuck in the front.

Bright Story Book had just Leeds UTD written in it, but I suspect that meant the owner was a fan not that Leeds United owned the book!

A few non-Blytons just for fun:

Peggy wrote her name on the board cover(!) of The Gay Dolphin Adventure by Malcolm Saville, while another Saville, Wings Over Witchend belonged to M. Broom.

Sometimes children like to write the date or their address and/or phone number and other important details:

(Where house numbers were given I have omitted them just in case the people happen to still live there! Otherwise they more or less as written but with capitals and commas to make them easier to read.)

V.E. Wallis wrote his or her name in Treasure Trove Readers Happy Stories in 1946 and Sylvia King added September 1949 to her name in Enid Blyton’s Treasury.

A piece of white paper has been stuck over the inscription in The Blue Story Book but I worked out that it said M Redding of Worple Road, Wimbledon, London SW19, 1945. I wonder who covered it up? A new owner? Someone trying to make it look tidier for selling? Someone who just hated inscriptions in books? 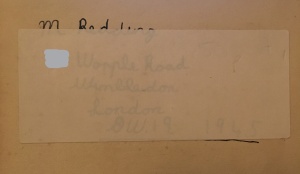 Andrew Worth of Ashley Rd, St Albans, Herts once owned The Fourth Holiday Book and he (or perhaps a later owner) added what might be a phone number – 415 840 – and the note Horses show on T.V.. Lee Barratt of Albert St, Windsor, Berks, England also included a note – KARATE is the Best to A Second Book of Naughty Children. 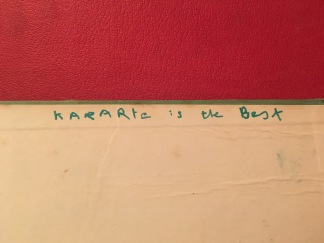 Below are the more straight-forward names and addresses I found:

I’ve learned a lot of new place names doing this, and Poringland was one of many I had to double-check I had gotten right! I also had to very carefully check the spelling of Carol Riggs’ address which was Lon-y-mynydd, Rhiwbina, Cardiff  and appeared in Five Run Away Together.

Most disappointingly nobody went past their county, except Lee Barratt who included England. I love it when children add Scotland, Great Britain or The United Kingdom, the World, the Universe… and so on.

But Children of Kidillin belonged to Ann Call who added that she was in Form 2c. I wonder if that was because she was at boarding school and wanted her book back should another girl borrow it. Miss Barbara Lane went one further and put her full address, phone number and the name and address of her school! This book belongs to :- Miss Barbara Lane. St Annes Rd East “Cottesloe” St Annes-on-Sea, Lancs. Telephone St Annes 24432. School. Elmslie Girls’Senior School, Whitegate Drive, Blackpool, Lancs.

I even found one with the shop selling it stamped inside: Hollow Tree House had BOOKS & BYGONES, RIVERSIDE, COURT WEST LOOE, 1/2 PRICE EXCHANGE inside. I had to double check that it did read Looe, which turns out to be a real place. That shop no longer seems to be there, though. I suppose they hoped readers would be reminded of their business and return to them.

Others liked to make it very clear that ‘This book belongs to:’

In The Mystery of the Missing Man is written (caps and all): THIS Book Belongs to Stephen HARMAN, HoldenHurst RD, Bournemouth, Hants. I like the emphatic capitals but I’m not sure what Hants means – Bournemouth is in Dorset. I did not know that until I looked it up, and it turns out that it’s not that far from Poole Harbour and Brownsea Island. 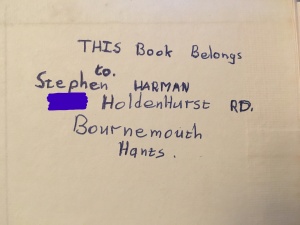 Five Have a Mystery to Solve and Five on a Treasure Island both read This book belongs to: Alison Smith. I think I bought these together in a charity shop in St Andrews.

The Friendly Story Book features a bit of a puzzle as part of the page has been torn away:

The missing parts of a few lines weren’t hard to work out but I won’t ever know the rest of his name for sure. I suspect it may be Shipman. The year could be any of the ten years of the 1950s. Perhaps, also, Alan used to live at 43 Holly something and forgot he had moved?

The same Deborah Gardner from above owned The Second Form at St Clare’s. In that she put her name and address as before, but with Aylesbury before Bucks. She also added My name is: Deborah Gardner and I live at: Corner Cottage [etc]. This book belongs to me. I find it really interesting that I’ve ended up with three of Deborah’s books and I would love to know more about her!

Inside The Eleventh Holiday Book is This book belongs to Wendy Bridgewood.

Many children took advantage of the books that have ‘This book belongs to’ already printed, with a space for their name

The Secret Seven books and the main Noddy series both had one in almost every book. Most of them were filled in in my collection. 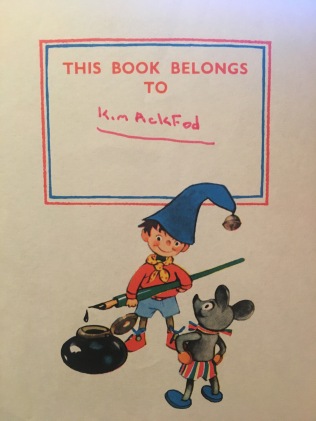 I said above that most had them filled in and that’s true – the rest I will be using in a later post about disagreements over book ownership.

Also with ‘this book belongs to’ spaces filled in were

Some books belonged to schools or libraries and had their name written or stamped inside: 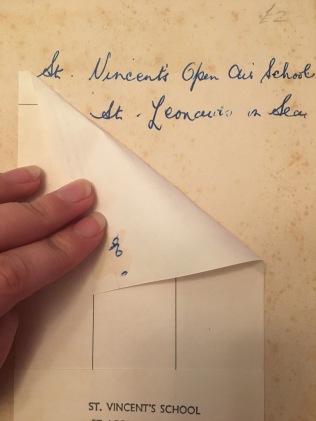 What have I learned so far from this exercise?

Despite many of of my books having been bought in Scottish charity or second hand shops all the addresses are for England and Wales, and mostly England at that.

Children love declaring ownership of their books and feel that their address is also important presumably in case they lose their treasured book.

I have surprisingly few ex-library books, given my low budget for books. I thought I’d have had more.

This entry was posted in Personal Experiences, Purchases and tagged Inscriptions. Bookmark the permalink.

2 Responses to Inscriptions in books 2: this book belongs to