Inscriptions in books 3: It’s not her book, it’s mine!

My previous posts looked at books with one clear owner, be that evidenced by a nice prize giving label or hand-written names and addresses. I have, however, lots of books whose ownership isn’t quite so clear. Sibling arguments or second-hand ownership has been scrawled all over them and it’s difficult to even see who had it first!

My family are not innocent in all this

Many Enid Blyton books I’ve owned over the years have been handed down to me. First they were my owned by one of my mum’s older sisters, then they were my mum’s and her younger brother’s. Some of them then went to my cousins, then to me and the odd one to my sister. There has therefore been various pen and pencil disputes over who currently owned each book…

The Mystery of the Hidden House presumably first belonged to my aunt Elizabeth as her name is in green felt tip, sideways on the endpaper. My mum has then added her name to the title page in regular pen. That’s nice and neat, at least, some later entries will include a lot of scribbling and scoring out.

Bimbo and Topsy was first my cousin Shona’s, she’s put her name in red pen twice. Then it was my sister’s, possibly the only Blyton she owned and she’s put one of her little name stickers inside too.

Tales of Toyland is a bit more of a mess (it has no spine!) and that has Elizabeth’s name, then my mum’s name and address, her name in ‘bubble’ letters her name at least twice more, once scored out, and 25 1/2p.

I bet there’s more but I replaced the tattiest hardbacks and all the paperbacks in my late teens and early twenties. They now live in my parents’ loft, and as dedicated as I am, I’m not going up there and raking around for even more scribbles.

The least said about the mess inside Cliff Castle and Smuggler Ben, the better! 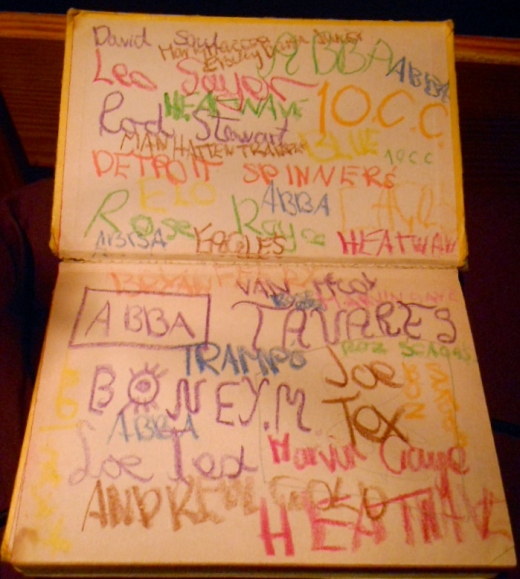 There’s no excuse for this – all my Mum’s favourite bands in crayon on the back endpapers. (She blames her brother, though!)

Some of those nice ‘this book belongs to’ labels have been spoiled by new owners, and so have one or two lovely prize giving stickers

Noddy Meets Father Christmas has belonged to Kenny and Brian, who I imagine were probably brothers. It’s impossible to work out who staked their claim first as names have been written and scribbled over a few times. Brian looks like he had the last word, though.

Secret Seven on the Trail was ‘shared’ three brothers. Philip Mutton pencilled his name in rather big writing on the endpapers. The ‘This book belongs to’ space has both Colin Terence Mutton and Cristopher Gordon Mutton, it looks like Colin’s name was the later addition. There’s also a  drawing of a ‘Cowboys and Indians’ scene on the endpapers, I wonder which Mutton boy was the artist. 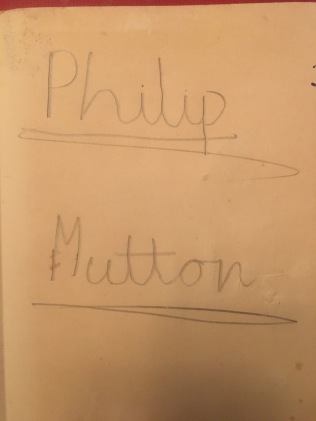 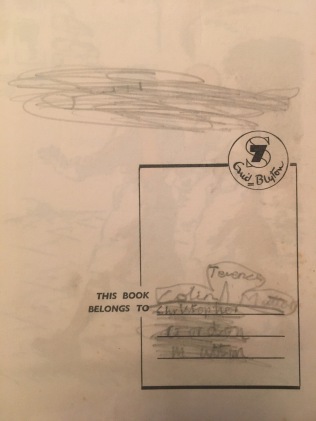 Puzzle for the Secret Seven was first owned by Margaret and Maysia Sciepanow, 7b New Romny (I wonder if that’s meant to be Romney?). Perhaps Margaret and Maysia are twins, or just friends in the same class at school. Their names have been written in pencil and gone over in pen. Then the book was owned by Richard Timothy Smith, Leybury Way, Scraptoft Leicester. Age 10, 1974. He has scored out 1957 and added 1974. Just to make it completely clear the name label has Now Richard Smith above it. 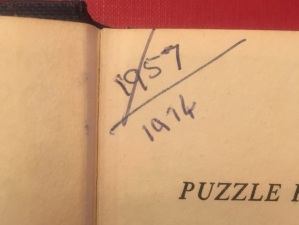 Shock for the Secret Seven was originally in the possession of Andrew M Jobling Frendsham Vale, Gaywood, Surrey. He added ANDY Jobling above that, too. Jane Brighton has pencilled her name over Andrew’s at some point, but before or after ANDY was written?

The Queen Elizabeth Family was Awarded to Linda Williams in 1966 but this has been scored out and then in green pen Sarah Trewick has written her name and 1993.

Tales After Tea has another spoiled prize giving label. – I can’t tell who this was presented to for regular attendance at Sunday school, 1959. Loretta Joughin has written her name over it, and gone over the thin blue ballpoint writing below with the same thicker pen.

She has also written LORETTA M. M. E. JOUGHIN THIS BOOK BELONGS TO ME IF ITS LOST BOX ITS EARS SEND IT TOO ME. And, bizarrely, nylon Deborah allan, whatever that means! 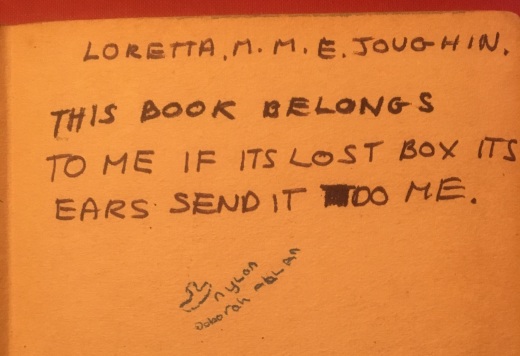 What’s wrong with just neatly putting a line through a past owner’s name and then adding your own?

Not even personal messages to the original receiver are safe sometimes

Enid Blyton’s Circus Book has an inscription that can barely be read now, thanks to it being viciously scored out. I can make out To Michael but the surname is obscured, and with love from a name which might be Dorothy (thanks to Ellie for working that out) Baum. There’s no new name written in this book, so I wonder if this was a new owner or just that Michael no longer liked Dorothy.

And the rest, in various levels of book desecration

The Astonishing Ladder and Other Stories has a stamp on the endpapers reading B.M. Dodds, Edward Street, Jarrow. This has been neatly scored through with a single line and the name Joyce written above. I cannot make out Joyce’s surname, the closest I can get is Yiceymoug and I’m not sure that’s even a name! 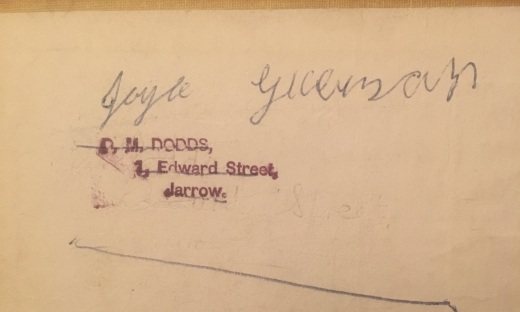 Saucers Over the Moor by Malcolm Saville was once part of West Sussex County Libraries Junior Library and is stamped 8 Jul 883. Perhaps that was meant to be 1983? It then belonged to J Barron and S Barron who added that it was the 8th in the set. I hope they did own it later, and didn’t just write in a library book (pretty silly to use your own name in that case).

related post⇒ If you like Blyton: The Lone Pine series by Malcolm Saville

In the Fifth at a Malory Towers has Cynthia Lorrymann and H Reid written on the front endpapers, neither being scored out. Then This book belongs to Nicola Wood and is signed N. Wood. Both pages of rear endpapers also have the name Nicola Wood on them. 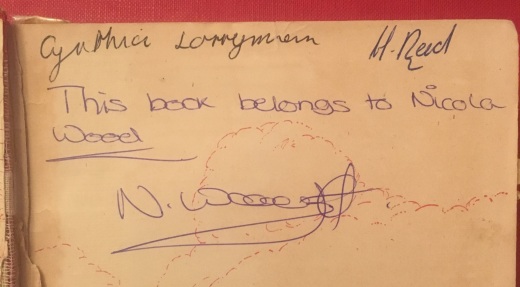 Don’t Be Silly Mr Twiddle has quite a lot of writing in it. The first front endpaper reads Carolyn Baldwin roman road. southwick. sussex. The second page reads Margaret Jackla in blue and Carol in red. Below these are some coin rubbings it looks like. The title page has .. Carolyn Baldwin, Roman Road, Southwick is below all that scored out writing. The next page has This book belongs to Margaret Jackla. On top of all that there’s a drawing beside Mrs Twiddle’s face on the title page, I DON’T written at the top of another page and what looks like Lesley Rosebun at the top of another. 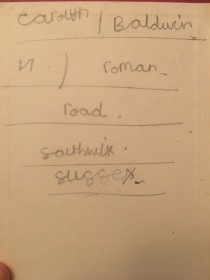 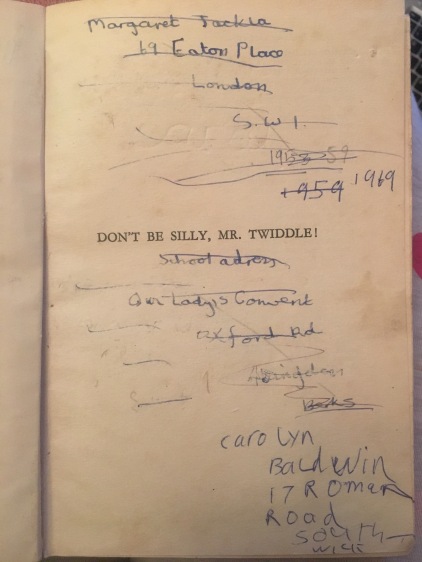 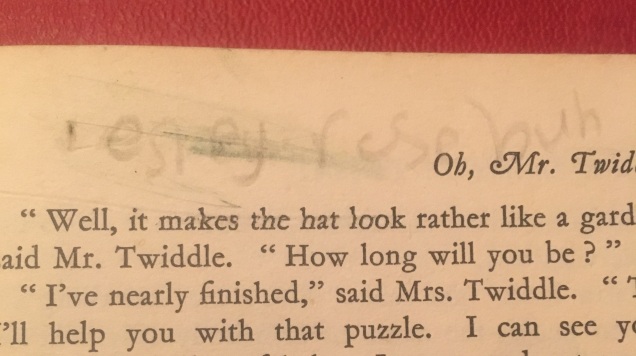 The Three Golliwogs is even worse. ELLEN FISHER. Tammys book. Miss Ellen Fisher, Westthorpe Road, Killamarsh, WB Sheffield S31 8ET. Telephone Sheff 482876. By Jane Fisher is all on the first endpaper. Jane Louise  Fisher, Simcrest Avenue, Killamarsh, Sheffield s31 8fd is on the second. Perhaps these girls were cousins and one inherited the book from the other? Or perhaps aunt and niece. The post codes don’t match the addresses, though. If you swap the 8s for 1s they do – I wonder if there was a big post code shakeup in Sheffield! 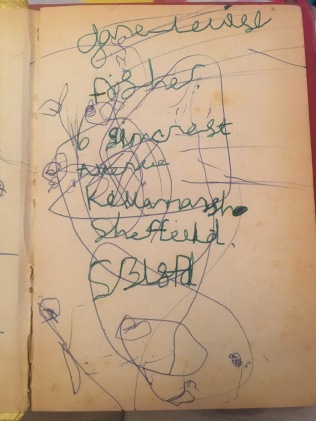 I have to add that despite my family’s bad book owning habits I have never scribbled over a book in my life!

Next time: Books given with love.

4 Responses to Inscriptions in books 3: It’s not her book, it’s mine!