Barney Mystery covers through the years

The Mystery of the Skull

The Mystery of the Invisible Thief is the 8th Find-Outers mystery. As the title suggests there is a thief in Peterswood. An invisible thief. One who is never seen despite leaving behind very large hand- and foot-prints as well as a strange round criss-crossed print too.

Soon the hunt is on for a large-footed and very sneaky individual, until a silly trick played by Pip sets them onto the real culprit. 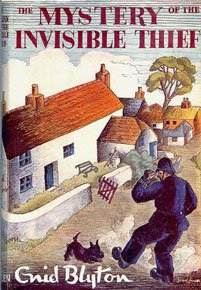 Pongo the chimp meets the Famous Five in Five Go Off in a Caravan. His friend Nobby introduces him to the Five and he makes firm friends with them all, even Timmy. Pongo is fiercely loyal to Nobby and tries to protect him at all costs, defending him against the nasty Lou and Nobby’s uncle Dan. He is strong and brave but also very mischievous. He will steal sweets from pockets and anything else he takes a fancy to, and loves to tease the circus elephant Old Lady.

This entry was posted in Blog talk and tagged April, Monday. Bookmark the permalink.