As I covered in my post on Blyton’s prequels, sequels and continuations, there are six additional Naughtiest Girl books written by Anne Digby.

I’ve borrowed all of them (in two different editions) from my library and now it’s time to actually read them, having renewed them at least twice each.

Elizabeth intends never to be naughty again. But when John entrusts her with his secret, the naughtiest girl finds herself in deeper trouble than ever…

Well, that’s intriguing. I assume it refers to John Terry the boy who runs the garden at Whyteleaf (not the England football player), and I wonder what his secret is.

Interestingly the back cover also states that Anne Digby takes this favourite character forward in four new adventures. They must have done well enough then if they added a further two.

I’ve read the main three books several times so I’m familiar with the storylines and characters, but I’ve had to grab my copy of Enid Blyton’s Omnibus to skim the story Here’s the Naughtiest Girl. I’ve only read that once, I think, and it’s counted as book #4 in the Naughtiest Girl series if you look at the Anne Digby entries.

When is this set?

I honestly can’t work out if this is supposed to be set in the 40s/50s or the present day. The weekly money is £2 as in the updated originals. Although money is rarely mentioned, the amount that are seem reasonable such as £5 for a bunch of flowers. There’s nothing glaringly modern like mobile phones or computers, but there are garages for the teachers’ cars. I suspect one or two of Blyton’s teachers may have had a car but not many of them, not enough to warrant a row of garages. But then the milk is stored in jugs in the pantry under muslin squares which is definitely a 40s/50s thing.

The language is an odd mix. There is some good use of classic language ‘ought to’ and so on but as usual it doesn’t capture Blyton’s writing. Again there’s no glaringly modern slang but the language isn’t entirely fitting with the 1940s or 50s either.

She has done a really good stint, and I am dead worried are a couple of phrases that do stand out.

There are a few inconsistencies when you compare details to the original three/four books.

In the first book Elizabeth goes to Rita’s study and remarks how nice it is, and Rita says that William’s is just as nice. In this book they share a study.

A whole passage is given to describing the platform in the hall, which was just built in the Easter holidays. Yet the platform is mentioned in the first book! It also describes how the monitors sit, six on either side of William and Rita. But before it was always William and Rita at a big table and the monitors around a small table – which would facilitate them discussing things much better than a long line. The junior class is also mentioned as sitting cross-legged on the floor. I assume these are the ‘babies’ which wear socks as mentioned in the first book though I don’t remember them ever being at meetings before.

I also wondered about Most of Elizabeth’s efforts to grow things so far had come to grief, usually because she had forgotten to look after them properly. It has been a while since I read books two and three so this might be accurate, I just don’t remember her being that bad. I remember her almost burning down the shed lighting a bonfire, and perhaps being a little slap-dash on occasion, but not failing to grow much through not taking care of her plants.

A significant portion of this book is focussed on slugs. As the secret belongs to John and he spends all his time gardening, I expected something to do with plants but not this.

First he gives Elizabeth a blow-by-blow account of how to drown slugs in milk. They then examine all the dead ones in the bowls. Later Elizabeth goes to examine and poke the slugs in the rubbish heap which she declares are dead all right, they’re as dead as doornails.

When caught she jokes It’s my secret hobby, I like playing with dead slugs. This isn’t a Blytonian joke at all, in fact it verges on sarcasm which she almost never used.

Also used is I’ve crossed my heart and sworn to die.

The deads slugs are mentioned a further half dozen times after someone puts them in a tin to play a trick.

So the actual story! The secret is actually only half the story and it is probably the poorer half, though it ties in with the second storyline.

John’s secret [spoiler alert!] is that he’s entering a  competition in the village show and therefore has to grow his lettuces all alone to qualify.

He does let Elizabeth in on the secret, and she dithers about as to whether she should risk helping or not when John ends up in the san for a week. She doesn’t help in the end, and John recovers in time to do what he needs to.

The secondary story is about Julian’s cousin Patrick who appeared in Here’s the Naughtiest Girl. He has won a place in the second tennis team but someone is trying to sabotage him. He thinks it is Elizabeth as they do have a bit of a rivalry, but Elizabeth and Julian work together to find out who it really is.

Elizabeth gets a bit of a hard time as Arabella and her little friends spread rumours about Elizabeth being guilty of the sabotage, not helped by some of Elizabeth’s actions in trying to help John.

What was good or bad?

Unfortunately this book is mostly bad. It’s probably worse than the Malory Towers continuations, as being so short there is little material beyond the two weak storylines. It also comes across as being written for a younger audience than the original books were.

The good points are that there are the two separate stories which on occasion tie together cleverly. Elizabeth is reasonably well written and mostly behaves as I would expect her to, likewise with Julian. Arabella is turned a bit of a one-dimensional ‘baddie’ however. There is one time that Elizabeth does something very dishonest, she steals a jug of milk from the kitchens then doesn’t own up to having done so. Her logic is that she’s only trying to help John and she can’t admit that without telling his secret. Elizabeth has done some pretty bad things at Whyteleaf, but never theft. She also never lies. She always stands up and admits her wrongdoing. Like in the first books she admits to spending the money from her uncle, but says she cannot say why as it would break a confidence.

I didn’t like that John didn’t find an opportunity to warn Elizabeth that bad weather could lead to slugs. She did rush away as she had promised Patrick she would watch his match, but John should have understood. He could have laid the milk traps himself or found Elizabeth in the evening to warn her instead of letting all her lettuces get ruined.

It seems quite contrived that John must not have help, and that he also refuses to tell anyone what he is doing so that is a surprise. If he was more sensible about it all then he wouldn’t have had any problems. The people involved would have understood him asking someone to take over for a few days while he was unwell. It fits with Blyton’s characters being pathologically honest that he wouldn’t do anything he considered cheating, however.

Also very contrived is the sudden introduction of Mam’zelle’s need to eat oat biscuits constantly to stave off her dyspepsia. I thought it an odd thing at the time then rolled my eyes when I read the part about a trick being played with snacks in a tin being replaced with slugs.

The resolution to the secondary story-line is exceptionally rushed. The wrong-doer is identified, sees the error of his ways, his father also realises instantly that he is at fault and promises to make everything better all in about two pages.

Lastly, I find it a bit hard to believe that John [spoiler alert!] would still win despite entering his poorest specimens. I know we need a happy ending but yeesh. 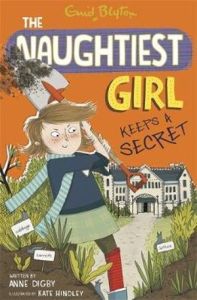 I had thought this might have been an OK book from the first couple of chapters. Then John revealed his utterly lame secret. I hoped that the more interesting subplot, the mystery of the tennis saboteur would save the book, and at first it was genuinely interesting. Unfortunately it is not done half as well as the similar stories from First Term at Malory Towers or The Naughtiest Girl is a Monitor.

The book also suffers from having no ‘padding’. The main stories aren’t very strong and lack in interest but there is very little background either. No tricks played on teachers, no excursions. The tennis matches are not described beyond who played and who won. My hardback of the first Naughtiest Girl book has 184 large pages, this book has 152 much smaller ones with a larger font and larger line spacings, so far far less words.

I would class this as no style and no substance. I do not recommend. I just hope the rest aren’t so bad as I have five more in my pile!

Next review: The Naughtiest Girl Helps a Friend