At the start of the lockdown the BBC released all episodes of Malory Towers onto the iPlayer ahead of their scheduled air date on CBBC on the 6th of April. Despite being very excited I’ve only managed to watch two episodes so far. I definitely liked what I saw, so let’s see what happens next.

So far we’ve seen Darrell head off to Malory Towers, making friends with Alicia straight away and attracting Gwen to try to make friends too. She falls out with Gwen who blackmails her, and we find out that Darrell has been asked to leave her previous school and this is a new start for her.

What happens in episode three

The girls play their first tricks. First, Alicia has a box of trick sweets (which Darrell appears to be in on) and they dye Gwen’s teeth blue. Matron confiscates them and dyes her teeth blue, which gives Gwen an opening to bond with her over the nastiness of the other girls. We also get to laugh at her life modelling as a viking for the first formers and unable to open her mouth lest everyone see the blue teeth – it reminds me a bit of Mam’zelle’s ‘treek teeth’ especially as Miss Grayling talks to her and she’s mortified.

Darrell then pretends to be deaf in Mam’zelle Rougier’s class. Yes, Darrell. Not Alicia as in the book. I was surprised by this as although Darrell enjoys a trick she isn’t big on playing them herself – and given her chat with Miss Grayling in the last episode it seems unlikely she would do this. As in the book she then genuinely goes deaf and gets into trouble for playing a second trick. Mam’zelle Rouger is not as sharp as the book version but she does get the great line

The other main plot centres on Alicia’s ghost stories again. Mary-Lou, who we see properly for the first time in this episode, is particularly scared by these. It’s not helped by a ‘bloody’ handprint being left on the dorm room door in the night.

Of course there is no ghost and the handprint is jammy and made by Irene who is sleepwalking and sleepeating. The only solution to this problem is for matron to sleep on a camp bed in the middle of the dorm… but Matron is not a good sleepwalking minder as she sleeps through Irene getting up again, and Sally following her out.

What happens in episode four

Darrell continues to get into trouble. She forgets to do her prep for one, and then the bit I’ve been waiting for actually happens.

Gwen ducks Mary-Lou in the pool. Not like Alicia and Darrell are ducking each other and laughing but it honestly looks like she’s trying to drown her as she pushes her under and holds her repeatedly. Darrell races over and slaps Gwen hard across the face, has a row with Katherine and storms off.

She then apologises to Gwen, and the other girls have a meeting about it all. Darrell swings their opinion somewhat by apologising to Katherine, but it’s all muddied by Mary-Lou saying she and Gwen were just playing around, and Gwen saying that Darrell hasn’t apologised and is a liar.

Then, near the end, we discover why Darrell left her last school. According to Miss Potts she was actually expelled and it was for pushing a teacher down the stairs. Miss Grayling remarks that she’s not certain they know the whole story there.

We end on Darrell and Sally becoming quite friendly, talking about Mary-Lou’s fears.

What did I think?

I thought these were two good episodes, though I have my reservations about a few details.

As I said above it doesn’t make a lot of sense to have Darrell do Alicia’s deafness trick, especially given what we find out about her at the end of episode four. If she’s truly embracing a fresh start (guilty or not) she wouldn’t be daft enough to jeopardise it for a few laughs, surely?

Gwen continues to be brilliantly awful – using Mary-Lou to try to get out of swimming by pretending they both have heat-stroke, telling lies, sneaking and generally being very unlikeable. Unlike book Gwen the other girls don’t seem to see through her so well, and so she gets away with a lot more.

Gwen doesn’t understand the purpose of a bathing hat.

In the book she says I don’t call it an apology, which to me implies that Darrell did apologize but poorly, with bad grace or whatever. In the series she out and out says that Darrell is a liar and hasn’t apologised at all. In the book Katherine is much harder on her, and they explicitly say they believe Darrell while on TV they seem more ambivalent.

The other strange thing is Darrell and Sally. Book Sally barely says two words until they have the fight in the music room – other than to say she doesn’t have a baby sister. Here we have her boldly state that sending someone to coventry is just as bad as slapping them, following a sleep-walking Irene and getting chummy with Darrell. We even see her making a few jokes. I wonder how she will develop later on, and whether they will still have her argue with Darrell and get pushed over.

There’s more of a sense of the teachers knowing what’s going on in the series. Miss Potts keeps popping up and although she doesn’t know that Darrell has slapped Gwen she knows the first form are having a meeting, that Darrell is upset and that Gwen is being shady. We are privy to several conversations between the teachers and this is where we get various tidbits of information about the girls and what’s going on.

Darrell’s spelling issues continue. She appears to write Mallory Towers which is a sin in anyone who calls themself a Blyton fan let alone a pupil of that very school (in my eyes at least!) and she later can’t spell witches without looking it up. I’ve seen a spoiler that she has some form of dyslexia or similar and I’m not sure how I feel about that. Darrell in the books is a gifted writer, not just a story-teller, and it is odd to suddenly give her this problem. I can understand them wanting to feature such a problem, to show children watching that it’s OK to struggle with academic elements and help is out there but they could have used another character to do so. Darrell already has her temper to overcome and of course the added expulsion.

I was surprised that Gwen moaned to Jean about the non-existent mark on her face after the slap, considering Jean is played by an actress with a facial disfigurement. At first I thought it was quite cruel – both by Gwen and the writers – but then I thought it was actually very clever. Firstly it shows how self-absorbed Gwen is and secondly Jean’s sarcastic reply was wonderful and all the more meaningful.

Mary-Lou is very well acted, she is small, quiet and very much how I imagine her. She manages to be likeable despite being rather spineless at times.

Mam’zelle Rougier seems more likeable than in the books and I wonder if she is an amalgamation of the two Mam’zelles. She’s tall and slim but her more pleasant demeanour could be from Mam’zelle Dupont. 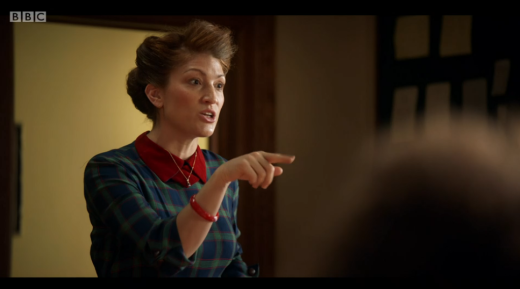 Matron continues to amuse, first with the blue teeth and then by trying to talk to Mam’zelle Rougier in rather bad French. I had been wondering how she got blue teeth towards the end of an episode but I now wonder if Matron hadn’t snuck her a trick sweet after being spoken sharply to.

I’m really glad the slap was kept in. I know it was one instead of four, and delivered slightly differently but given that some recent reprints have turned slaps into shakings one slap is far better than none.

Has anyone else watched this yet? If so, what did you think?

11 Responses to Malory Towers on TV – Episodes three and four