Fan fic Friday: Cunningham and Petrov: The Mystery of the Missing Agent chapter 21

Last time Anatoly, Bentley and Thompson found Puffin Island along with several clues that someone had been there recently. 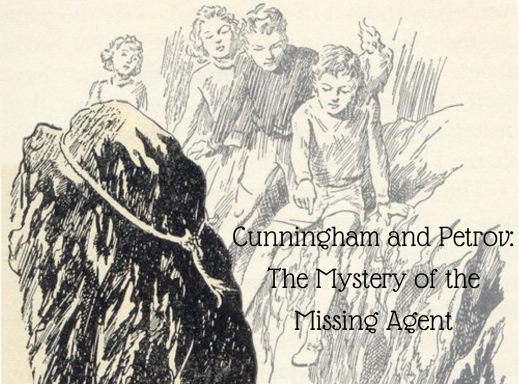 Anatoly plucked the paper from Bentley’s fingers and examined it as the other man hauled himself out of the hole. Disappointingly it was blank. “Useless,” he said with a shrug, holding it out so they could both see it contained no writing.

Thompson took it and examined the paper, holding it up to the sky to see if there was any indentations, or other marks on the paper. “Nothing,” he agreed, handing it back to Bentley.

Bentley curled the paper into his fist. “Why can people never drop nice obvious things like letters with their names on?” he sighed.

“I vote for not going missing,” Anatoly agreed. “We should have just locked Bill up at HQ until the heat had died down,” he added with a smirk.

“He would still get into trouble, he’d find evidence of a spy in our ranks or something,” Bentley said, cracking a smile.

“Most likely, but he’d be easier to keep track of,” muttered Thompson.

“Well we’ve lost track of him entirely, so we’d better get back to it,” Bentley said, grabbing a nearby stick and plunging it into the soft ground near the hole as a warning marker.

“Do we reckon the paper fell out of someone’s pocket and ended up here? Must have been recently,” Anatoly said as he went back to his knees to search the ground at close quarters.

“I don’t think it fell in from above, it’s too light to get through all that heather,” said Bentley. “Maybe someone fell into the hole just like I did, it’s impossible to see even though I know it’s there! The paper’s dry but then so’s everything in that hole, I doubt much rain gets in unless it’s absolutely pouring and it hasn’t rained since the storm the other night.”

They all contemplated that for a moment and then Anatoly said, pragmatically, “It is not hard evidence, we need to keep looking, though this hole is good to know about. If Bill knew about it, then there is a chance he would have used it if he thought he was being followed.”

Bentley thought about warning them not to mention his fall to anyone else, but decided against it. He had no doubt that they’d deliberately let it slip if he forbade it. At least he didn’t think either of them had actually seen him fall. He motioned them to continue on the search, though they were all more cautious as to where they put their feet, he noticed.

Their explorations took them towards the Western rise of cliffs and then up; they paused every few minutes to scan the parts of the island revealed to them at that height but saw nothing noteworthy. There wasn’t much to see on the cliff-tops themselves, they were scrubby and mostly barren due to the high winds that would whip around such an exposed area, but as Thompson checked around a small ridge of rock there came a shout.

“Hey! Come over here a minute!” Anatoly and Bentley made their was around the ridge to where Thompson was crouched over the blackened remains of a fire.

“Bits of wood, seaweed…” Bentley pushed the charred remains around with the toe of one boot. He turned around in a full circle, looking out to sea. “Looks like they were signalling for help.”

“Signalling to whom?” Anatoly asked sitting back on his haunches and throwing the charred piece of stick back into the fire pit.

“Anyone near enough to see the smoke, I’d guess,” Bentley said. “But Bill knew something was afoot, he would know that setting a fire could bring the wrong people.”

“He mightn’t have had a choice,” said Thomson. “If the boat and the wireless were out of action  and there was some emergency… someone fell down that hole and broke a leg or something.” He shrugged. “Maybe he was hoping we were already out looking for him.”

Anatoly bit his lip, “What if Bill and the children got separated?” he suggested after a moment, not wanting to think that it may have happened. “The children may have been desperate enough to signal if they were left alone.”

“Yes, they might have taken the risk willingly if something had happened to Bill,” Bentley agreed. “That is, if they were the ones actually on this island, and not some trippers who thought it would be fun to start a bonfire.”

“So, you don’t think this was them?” Thompson waved an arm at the fire.

“I think it probably was, but we’re running on a lot of assumptions here. More than I like,” Bentley said.

“It is not proven that it was them,” agreed Anatoly. “If they have left a clue we have not found it yet!”

“What sort of clue are we expecting to find anyway?” Thompson asked with a sigh. “They aren’t on this island and if they are half the children Bill thinks they are, none of them will have left anything behind. If Bill thought that there was any danger, he’d have not left anything either.”

“Unless it was a message for us!” he added as an afterthought.

Deep in thought they made their way back down what appeared to be a well-trodden path before exploring the Eastern cliffs. There was nothing of interest there, no suggestion anyone had climbed or walked up that side of the island, and so after they felt they had covered as much of them as was reasonable, back down they came.

At the bottom of the cliffs they had intended to head back towards the boat; taking in any areas they hadn’t already covered, but Anatoly drew their attention to a space in the rocks. A natural sort of path ran there, with handy steps here and there as it sloped downwards. Presently they came to the channel they had brought the boat into earlier that day, the trailing piece of rope still caught around the rock.

“Dead end,” Bentley remarked and Anatoly shrugged apologetically. “No, you were right to check it out,” he said to the young man. “If they moored up here then they must have come through this way and across to where we found the camp site.”

As they turned around and began to make their way back up the path Anatoly didn’t know what made him look down, but his eyes caught sight of something unexpected wedged in between two rocks. He fell to his knees, his hand scrabbling for what he had seen. The others looked at him like he had lost his mind, but when he held it up, a stupid grin on his face, they looked confused. Anatoly was holding up a stub of a pencil.

“It’s… a pencil,” Thompson said, no seeing the significance. “Obviously whoever had the notebook also had a pencil.”

“It is Bill’s pencil!” Anatoly said. “He always carries one, he always wears them down to the stub and always sharpens them with his pen knife.”

Bentley reached out and took the pencil from Anatoly and looked it over. “It’s just a pencil. The kind you can buy anywhere. You’re probably right about Bill – I’ve never seen him without a pencil and he does sharpen them until they’re almost gone… but so do a lot of people.”

Anatoly took the pencil back from Bentley and examined it closely. He gave a sudden exclamation and thrust the pencil back at him. “Tell me when you see it,” he said smugly.

Bentley rotated the pencil carefully and then held it up so it caught the light better. “S,” he said, though not with great certainty.

“Well I’ll be blowed,” Thompson laughed. “Smugs! I’ve seen him mark his pencils with S, or a zigzag like an S so people can’t pinch them!”

It was true that the marking was more of a lightening-bolt than an S, but it was challenging to quickly carve a flowing S shape with a penknife on a pencil. “I wouldn’t know about that,” Bentley said, but he was smiling. “I’d never stoop low enough to nick anyone’s pencil.”

“So Bill has been here,” he said thoughtfully, looking at the pencil again. “If only this pencil could tell us where he is now!”

3 Responses to Fan fic Friday: Cunningham and Petrov: The Mystery of the Missing Agent chapter 21