Five on a Secret Trail part 3

Yet again a Famous Five review has run to three parts – and that’s without dedicating a whole post to one character! Here you’ll finally find the comments and nitpicks.

I’ve decided that this one isn’t a nitpick, more of an observation, but I have questions about Timmy’s collar.

Firstly, is it really SO funny that everyone in Kirrin seems to stop and stare and make jokes?

Secondly, it don’t look like I would imagine it to in the illustrations. I thought the collars for dogs (and cats) were generally a sort of cone shape (just put cone collar into Google images to see what I mean). I imagine Aunt Fanny didn’t have a big enough piece of cardboard but the illustrations seems to show a very small cardboard circle sticking straight out which I’m not at all sure would keep Timmy’s long legs away from his ear. 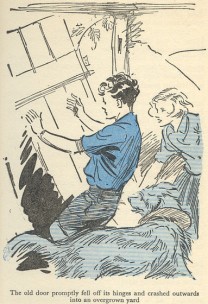 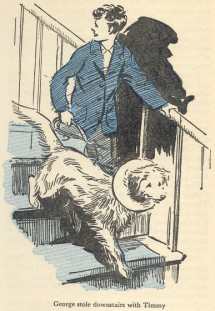 In fact he often looks like a saint whose halo has slipped!

There isn’t very much George-as-a-boy content this time around.

And now for all the rest. Some of these are slightly nit-picky but really they’re just observations, not plot holes or other ‘mistakes’. 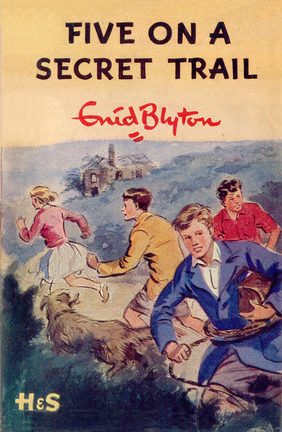 And finally, the real nitpicks.

Do I still feel that this ranks as 18th place? Well, I haven’t read all the books yet on this re-read but yes, I still think this would rank quite lowly.

First, the Guy/Harry thing is overdone. Too many meetings where the same things are said, then the explanation is given by Harry, repeated by the others, then several times after that they repeat how surprised they were that it was twins and not just one boy! OK, we get it!

The enemies are a bit lacking – the Five are never in any danger and never go up against them. The lights/wailing sounds are also a bit silly. The whole idea that Paul has both hidden the blueprints underground in a hard to reach place, but is also so ill that he can’t write a clear map baffles me – given Quentin’s reaction at the end it seems as if the plans went missing fairly recently too. It does say that he half-died escaping with the blueprints but it still doesn’t make a lot of sense.

There are some good moments but overall its one of the weaker books.

This entry was posted in Blog talk and tagged Five on a Secret Trail, The Famous Five. Bookmark the permalink.

6 Responses to Five on a Secret Trail part 3