The tale of how I completed my Five Find-Outers collection

Something fantastic happened to me tonight.

I have finally  ordered a copy of The Mystery of Banshee Towers – the final Five Find-Outers book. I’ve been buying original hardbacks for nearly ten years – I started by filling in the gaps in my Famous Five series (I did have all the books, but some were paperbacks of varying quality)  and then branched out into other series like Malory Towers and the Adventure Series. I only had one hardback Find-Outers book to start my collection – The Mystery of the Hidden House which at some point belonged to my aunt Elizabeth and then my mum as both their names are written in the front. As I had fourteen more books to buy, it did take me a few years to find them at affordable prices.

Banshee Towers, however, has alluded me all this time. It’s often referred to as “the weakest book” in the series, everyone’s least favourite, and yet it’s also the rarest title. As far as I can tell, it’s never been reprinted in hardback, unlike all the others which have varying numbers of impressions. Maybe it’s because just five years after the first edition Armada published their paperback version of the book, I don’t know. 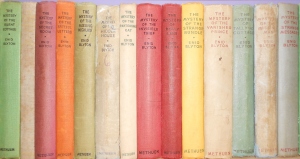 My slightly tatty and as yet incomplete collection of Find-Outers books.

Either way, there’s not many Methuen hardbacks around, and the ones that do appear for sale tend to be above my admittedly somewhat meagre budget. I usually don’t pay more than £5-10 for my Enid Blyton books. There are a few exceptions, but on the whole I go for bargains. I don’t expect first editions for this (though I have quite a few) or dustjackets (of which I have a handful) just reasonably sound original hardbacks.

It’s said Blyton wrote something like 700 books, and even allowing for a lot of them being collections of already printed works, there’s a good few hundred unique titles. If I want to own as many of them as I can find, even at £5 a book, that’s… well… a heck of a lot of money, so I can’t go blowing 10 books worth on a single title.

When I realised I wasn’t going to get a hardback of Banshee Towers for my usual budget, I decided I would make an exception and up my limit to £20-25. I then missed the end of two auctions on eBay for books that sold within that price range (once through my own stupidity and once as I was at a relative’s hospital bedside). It seemed that it just wasn’t to be.

I still checked eBay every week (and got angrier and angrier at the million rubbish and overpriced paperbacks and the facsimile dustjacket that’s permanently listed). I also checked abebooks frequently and stared longingly at lovely copies priced at £50, £60, £100. I just couldn’t justify that much money on one book however much I wanted it

Then, tonight, I stumbled semi-accidentally onto a copy I could afford.

A member of the Enid Blyton Society Forums posted a link to a blog where someone had written about the prices of Enid Blyton first editions. On that blog was a link to a site which would search multiple websites for books – amazon, abebooks, independent sites – and then display them all in one place.

And there it was. On abebooks, where I’d looked last week and got disheartened yet again. Banshee Towers. Methuen. 1961. First Edition. £7.50.

It’s not perfect, there’s a little text loss on one page, and a missing illustration, but for £10 I’m still very, very happy.

I’m sure the rest of the Enid Blyton Society Forumites will be thrilled too, as it means they won’t have to read my many, many posts lamenting the fact that my Find-Outers collection is incomplete. In order to help me out, several members had even offered to keep an eye out for affordable copies.

So thank you Maureen who posted the blog link, as if I’d not seen the abebooks listing tonight, it may have been sold before I saw it. Also, thank you to Stef for encouraging me to just go for it and forget about slight internal damage.

Now I just have to anxiously wait for Royal Mail to  deliver my precious book. I hope I haven’t counted my chickens before they’ve hatched.

This very copy of Banshee Towers will be mine!

Apologies for the length of this post, but I really am very excited about all this.

Have any of you gone to great lengths to obtain an Enid Blyton book? What was your most difficult find?

P.S. I do recommend abebooks (www.abebooks.co.uk, http://www.abebooks.com) for Blyton books, even if some of them are way, way over-priced but that’s a blog for another day 😉

This entry was posted in Personal Experiences, Purchases and tagged Methuen, The Five Find-Outers, The Mystery of Banshee Towers. Bookmark the permalink.