A guide to the Five’s next three adventures, and again, if you haven’t read the books this might contain some spoilers. 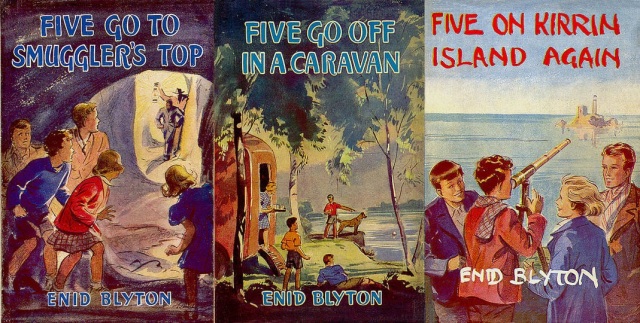 First edition dustjackets from “Five Go to Smuggler’s Top”, “Five Go Off in a Caravan” and “Five on Kirrin Island Again” illustrated by Eileen Soper.

The Locations: Smuggler’s Top is a huge, old, rambling house on top of Castaway Hill. Also on the hill is a small town, with a thick wall running right around it. The hill is almost an island, with just one road running to it through the marshes from the mainland.

The ‘Baddies’: Mr Barling, an eccentric local smuggler and someone from Smuggler’s Top itself.

The Plot: Before the five have time to enjoy their holiday at Kirrin the giant ash tree in the garden falls on the house. Uncle Quentin’s scientist friend and son were supposed to come and stay, but it’s arranged for the children to stay with them while Aunt Fanny and Uncle Quentin sort out the cottage. George is told she can’t take Timmy but sneaks him along anyway.

When they arrive Sooty smuggles Timmy up to his room through a secret passage, and at nights they sneak Timmy to George’s room. One night Block – Mr Lenoir’s deaf servant – lies in wait and ends up getting bitten. When Uncle Quentin arrives he is given Sooty’s room, and the children have no time to smuggle Timmy out. George is punished by Mr Lenoir for sneaking into his study to rescue Timmy and is locked in her room. She climbs out of her window and sees someone suspicious conspiring with Mr Barling. Meanwhile, Sooty and the boys see someone signalling from the top of the tower, who then disappears into Block’s room.

One night Sooty sneaks into Uncle Quentin’s room to try and let Timmy out, but catches Mr Barling – a known smuggler – kidnapping Uncle Quentin. He too is kidnapped and left in one of the catacomb tunnels with a drugged Uncle Quentin.  Mr Barling is trying to buy Uncle Quentin’s plans to drain the marshes, because this would end his smuggling. It’s then up to Timmy to lead the rescue mission.

My Favourite Parts: Smuggler’s Top is and always has been my favourite Five book, in fact it’s probably my favourite Enid Blyton book, my favourite children’s book… maybe even my favourite book full stop. It has secret passages, which I always love, but my absolute favourite part of the book is the ash falling on the house, and how Julian saves everyone.

Julian warns everyone about the falling ash tree in “Five Go to Smuggler’s Top” illustrated by Eileen Soper.

The Locations: Merran Lake and a camping spot halfway up the Merran Hills

Significant Other Characters: Nobby the circus boy, Pongo the chimpanzee, and Barker and Growler Nobby’s dogs.

The Plot: The five are at Julian, Dick and Anne’s home trying to decide what to do for the hols when they see a circus go by. Nobby, a circus boy tells them where they are headed and the five decide to rent caravans and have a holiday near the circus camp.

When they arrive and camp near by, Nobby’s uncle Tiger Dan is not pleased to see them and warns them away. They camp up a hill overlooking the circus and the lake. Tiger Dan then tries to persuade them to camp down by the circus but Julian refuses. Barker eats some poisoned meat and becomes very sick, and they realise that Tiger Dan and Lou were trying to kill Timmy. Julian sends the others to the town for the day, and hiding on a caravan roof watches Tiger Dan and Lou show up and move the caravan to one side and disappear down a hole underneath.

The Five explore with Nobby and make an amazing find, but also get caught by Dan and Lou, who trap them inside. This time it is Timmy, Pongo and Dick that save the day.

My favourite parts: The caravans are pretty cool, I like all the little features like the running water and little cupboards. I also enjoy the bit of circus life we see, and Nobby’s admiration for the five is touching. Pongo is very funny, with his pick-pocketing and faux shame at being caught. His interactions with Timmy are amusing too, particularly when shaking paws and he goes round the back to shake his tail too.

The Five are inspired to take a caravan holiday in “Five Go Off in a Caravan” illustrated by Eileen Soper.

The Locations: Kirrin Cottage, Kirrin Island, the Quarry and the Coast Guard’s cottages.

The ‘Baddies’: Mr Curton, who introduces himself as Martin’s father, is not very nice to Martin and prevents him from doing what he loves – painting. Mr Curton also has a few men who help him with his scheme.

The Plot: The five are back at Kirrin for the hols, but they can’t go to Kirrin Island as usual because Uncle Quentin is there doing some experiments. George of course, is furious that her father is using her island, and has built a plastic tower in the centre of it. Out walking on the cliffs the five meet Martin and his father, Mr Curton. Mr Curton appears to be too interested in the island, according to Dick, but he thinks George is a boy, so she doesn’t agree (she can’t always be right about these things!) Playing around at the old quarry the five – thanks to Timmy – find the start of a secret tunnel.

The five and Aunt Fanny visit Uncle Quentin, but can’t work out where his work room is. Uncle Quentin tells his family that he thinks that he’s not alone on the island, and asks George to leave Timmy to guard him. George agrees, as long as when Uncle Quentin signals at 10am and 10pm he takes Timmy up to the top of the tower too. Every day at 10 George goes to the Coast Guard’s cottage to look through his telescope so that she might catch a glimpse of Timmy. One day he isn’t there, and she begins to worry, so that night she sneaks out of Kirrin Cottage and rows to the island to investigate. She discovers another entrance to the dungeons, and goes down to locate her father. She finds him a prisoner of two men who want to steal his experiment, and have shut Timmy in a small cave. George, her father and Timmy then have to escape the island before it blows up.

My Favourite Parts: George seeing TV for the first time, Anne telling Mr Curton exactly what she thinks of him and the rather touching moment between Uncle Quentin and George towards the end of the book. 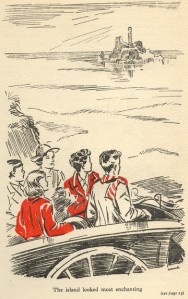 Part 3 will hopefully be up next week, until then, what’s your favourite part from these books?

This entry was posted in Book reviews and tagged Famous Five Series Synopsis, Five Go Off in a Caravan, Five Go to Smuggler's Top, Five on Kirrin Island Again, The Famous Five. Bookmark the permalink.