Posted on January 9, 2013 by worldofblyton

It all started when I saw on the forums they were holding an Enid Blyton Day.

At first I thought it was in London but I’d misread Loddon as London. But, about a month later, I found out it was near Reading. I knew my Grandma lived near Reading, so I started planning. I sent a letter to my mum (because I am extremely shy) asking if I could go. She said yes and so did my Grandma. I became really excited over those couple of weeks and my friends got really annoyed with me.

But on the 11th of May, I set off to Bracknell. That night it took me ages to get to sleep as I was so excited for the day. When I woke up, I had a meal of jam on toast. I was bursting with excitement and, if I could, I probably would have exploded! Finally at 10:30, my Grandma and I set off to the Enid Blyton Day 2012, the car bursting with snacks and lashings of ginger beer. We stopped off at my Aunt’s on the way and she very nicely gave me some Enid Blyton books! And luckily, they were ones I didn’t already have!

At about 11:00 we left my Aunt’s  for Twyford. My heart was thumping loudly. Was all I had hoped for been a scam? No, because when we got the amazing Loddon Hall, most of the spaces were taken! My worries were put to rest. We grabbed a parking space and ran towards the desk outside. It was there I met my first forumite (and Society leader!) Tony.

“Yes, that’s me! 7up!” I replied (my user name on the forums is 7UpRomana01- shortened to 7Up).  He granted us entrance and our eyes set on the hall filled with chairs and books.

I was gob-smacked. I wish I’d brought more than £15! My Grandma and I browsed for a while. I saw some more forumites; Julie, Nigel and Daisy. I had finally met the people I had exchanged messages with since February. The trouble was, I didn’t know how to talk to them! I am now very thankful to Julie for spotting and introducing me. Throughout the day I also met Anita, Eddie and Chick, Nigel’s wife Jane Viv and Rosie, Wolfgang, Stef, Fiona and John.

The first speech started at 12:05 and it was Sarah Lawrence. She talked about Seven Stories and how they’re planning to have an exhibition of Enid Blyton. I was very interested at first but when she went over time I got a tiny bit bored.

Next was Jon Appleton. His speech was not very long because Sarah had gone over time but it was still entertaining.

Lunch came and my Grandma and I had ham and cheese sandwiches. Once I had finished, I went on the search for some Famous Fives. I bought numbers 13, 17, 18 & 19. Fiona and Stef helped me with the bargains.

Then at 2:15, Georgina Hargreaves did her speech. It was extremely amusing and her sketches were better than my best drawings. The best bit was when she told us where a witch she drew was based on her mother or mother-in-law (I’m not sure which!) She did a Q&A session and I was very, very lucky to have been one of the ones picked.

Pam Ally was last, but not least, and she told us about Darrell Waters RLC, Enid Blyton LTD and Chorion. No offence to her, but I may have gotten a bit bored and lost interest.

After her speech, there was a big kerfuffle with chairs being packed and books being bought. Then, all we forumites headed to Dinton Pastures to have a fantastic picnic. There was a huge variety of foods there. From crisps to sausage rolls, to ginger beer and Fiona’s magnificent tiffin.

Also Stef, Fiona and I found a path that lead to a field with awesome wooden sculptures of animals. It was also extremely muddy so I got my leggings very very muddy. What an adventure we had!

Unfortunately, the day eventually came to an end but it was one of the best days I ever had. 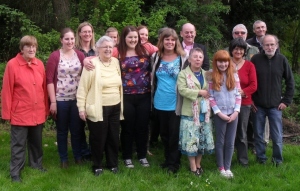 The forumites at the picnic