Posted on February 6, 2013 by worldofblyton

Scamper from the Secret Seven series

A few days ago, I was debating between the names Timmy and Scamper for my new puppy. We decided on Scamper for two reasons:

1. It’s more original
2. I told dad, Timmy was a dog who saved the children from horrible fates all the time. Scamper, on the other hand, didn’t get any chance to do this. We have a Labrador  and they’re no use as guard dogs, and so my dad said, I guess our pup will be the more Scamper kind of dog. So then Scamper it was, and Scamper it stayed.

Scamper drawn by Bruno Kay in “Go Ahead Secret Seven”

But that line of dad’s set me thinking. ” I guess our pup will be the more Scamper kind of dog.”  What’s a Scamper kind of dog? If the Secret Seven children got into as many adventures as the Famous Five, then would Scamper be as useful to the SS as Timmy was to the Famous Five? He would certainly be loyal and want, in his heart of hearts, to be as useful for his beloved SS, but would he be? Would he be as scary to bad guys as Timmy was? I don’t think so.

So to me, Scamper is a loveable, awesome dog, who loves the SS, but he’s just not like Timmy. Now you may ask, then what’s the difference between Scamper and Buster?  Buster DOES seem a little ferocious, who’ll be of some use to the Find Outers. His habit of nipping at everyone’s ankles will help Fatty & co. The SS in itself isn’t such a major series, so probably Scamper comes out this way. Scamper is not even a member of the SS, and he’s a fairly minor character in the series. He’s probably less important even than Susie. I mean, c’mon, a dog is not part of the main reason the series were created, and you call him a major character? Nah!

And what about attachment? Is Scamper as attached to Peter and Janet as George is to Tim and vice-versa? I don’t think so. Though both Peter and Janet will be willing to give their lives to save Scamper, there just isn’t the same relationship between them.

Oh well, on what I’ve seen of Scamper, that’s all I can say. 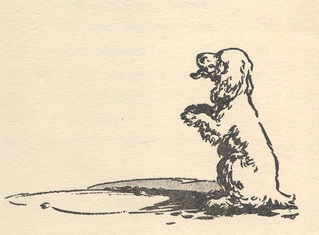 Scamper in “The Secret Seven” drawn by George Brook