Posted on February 27, 2013 by worldofblyton

After meeting Tammylan, Benjy goes off to his cave and is soon sitting there watching Tammylan stroking one of his visitors, a hare. Another animal comes into the Wild Man’s house – this time a woffly rabbit, who sits at the mouth of the cave. Tammylan talks to the hare, or at least mimics its noises, and the hare seems to actually understand him! Tammylan teaches Benjy – and of course the book’s reader – the difference between the rabbit and hare, where they live, and how the rabbit folds back its ears. After his incredible adventure with Tammylan, Benjy runs home ready to tell everything to his somewhat jealous brother and sisters. 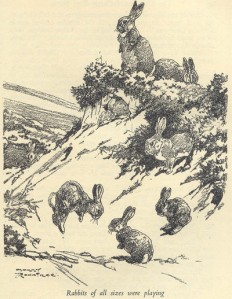 The rabbits playing at the enterance to Timmylan’s shelter. By Harry Roundtree

Tammylan really is one of Enid Blyton’s most interesting characters. A wild man living out in caves and fields – certainly a more unusual type! His role in the book is totally indispensable. Maybe sometimes Enid is speaking through Tammylan in The Children of Cherry Tree Farm, teaching children about the nature and animal life around them and how they should treat it with love and care and also respect it. She doesn’t just sound like an animal encyclopaedia but is fascinating and exciting, captivating her audience.

Much to the children’s annoyance, Uncle Tim goes along to see Tammylan and check “he’s all right for them to go about with.” Luckily for them Uncle Tim deems him as a queer fellow but that the children need to learn about animals, especially since Penny asked him whether goats lay eggs!

Now with their uncle’s permission, Benjy and little Penny head over to Tammylan’s cave to meet some more of his wonderful little friends. They see a fleeting glimpse of an animal beside Tammylan and ask what it is. When they discover it’s a snake, Penny is immediately terrified (unsurprising as about a third of people have a phobia of them!) and gets a telling off from Tammylan, but is forgiven until she gives another scream! Soon afterwards, Benjy and Penny see the grass snake which sheds its skin. Tammylan whistles a tune (which Benjy later copies) to charm the snake but that isn’t really correct as snakes are deaf! When Tammylan sends them home he tells Benjy to bring Sheila and Rory the next time at midnight and gives Penny the snakeskin, or slough, because she won’t be coming. Penny with her snakeskin and Benjy, whistling, walk back home to the farmhouse at Cherry Tree Farm.

On a warm night, Benjy, Rory and Sheila set off to visit Tammylan. They go with him to see the badger’s den or set and look at its amazing camouflage. Tammylan uses his ‘low voice’ and the badger is at once put under the spell of this fascinating man.

A few days after their moonlight adventure, Aunt Bess’s lawn is covered with little bumps and hills that can only mean one thing – moles! Uncle Tim declares he will get in the mole catcher to catch the ‘little pests’. It’s not the mole’s fault that somebody put a lawn there! The children seem to think so too and go to Tammylan to try and get a few good points about the little miner. They finally find him trimming back his willow house – probably very similar to Jack’s in The Secret Island. While eating the chocolate cake Auntie Bess gave them, they see a little squirrel called Bushy who brings along two fluffy-tailed friends to join the little party. All three rush over to a delighted Benjy – mainly because he has some cake left! – and sit on his shoulders and head as the children follow Tammylan to one of the mole’s burrows. There they find Mowdie Mole and see his spade-like paws and long nose. When they go home to Cherry Tree Farm none of their efforts persuade Uncle Tim and he hires the mole-catcher anyway. When the children tell this to Tammylan he says, “He may catch all the grown moles, but he leaves the youngsters in the mother mole’s nest!” So when Mr. Mole-Catcher came Benjy thought of all the little baby moles in the ground, ready to wreak more havoc on the lawn!

One day when Sheila and Penny are away Rory and Benjy go off to Tammylan’s willow house. They don’t find him there so they search for him, meeting several animals at the same time. Soon they come to a river where they meet a huge swan. Benjy feeds him a sandwich but that’s a bad mistake as the greedy swan immediately wants more! The boys have to give him all their lunch except half of Rory’s. Little do they know Tammylan is watching them all the time from the trees above them!

When Tammylan does reveal himself he makes a delicious lunch for the two boys out of mushrooms, roots and leaves. After their rather strange but tasty meal they go to find Bushy (remember the squirrel that was on Benjy’s shoulder?) and his wife’s nest. Soon, when they have climbed the tree they see the squirrels nest, a woven masterpiece of bark, twigs and grass. 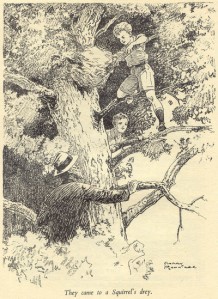 Climbing to the squirrel’s drey by Harry Roundtree

After climbing down the tree again Benjy tells Tammylan about his coming birthday. Tammylan asks Benjy what he would like from him and Benjy gets very shy but Rory takes pity on him and tells Tammylan what Benjy really would like: a night in Tammylan’s tree-house! Tammylan appears very pleased and invites Benjy to stay for the night. Benjy is absolutely over the moon with joy! How jealous the others are! And what a treat for Benjy to look forward to! Enid seems to think so too as the next three chapters will be about Benjy’s birthday and his visit to Tammylan, but that will have to wait till next time! 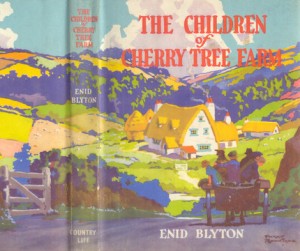 All images taken from the Cave of Books

This entry was posted in Book reviews and tagged The Children of Cherry Tree Farm, The Farm Series, Written by Aaron. Bookmark the permalink.

1 Response to The Children of Cherry Tree Farm, part 2