The Valley of Adventure

First published in 1947 this is the third book in the series. 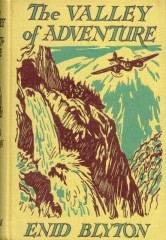 The cloth board cover

The majority of the adventure plays out in Austria, and as the title suggests, in a valley. The valley is beautiful, tranquil and utterly deserted. There’s a slightly sad feeling to it as all of the buildings have been burnt and destroyed, and there’s no way in or out except by air. There are some marvellous caves including the lovely fern cave in which the children make their home. Fern cave is so called as the rather low entrance is covered by a large fern curtain which keeps out the sun and the spray of the nearby waterfall, and also keeps it hidden from prying eyes. It has a soft mossy floor and a natural rocky ledge which is perfect as a kitchen shelf. Excitingly, the girls discover the cave also has a tunnel leading out of it to more caves. Part of Philip’s adventure finds him in ‘Gairdon’ which is apparently on the “North-east coast of Scotland.” As far as I can tell, it’s a made-up place. There is a village called Gairloch on the North-west coast of Scotland, though.

Burnt homes in the valley

Inside the fern cave

In this book the children are up against some South American men, the main two are named Juan and Pepi.

Bill accidentally tips the children head first into this adventure, and also appears in his seemingly traditional rescue-leader role at the end. The children stumble across two long-term and well-hidden residents of the valley (we only know him as “the old man” but his wife is called Elsa.) We also meet Otto Engler, a very thin man with a heart problem who is being kept prisoner for his knowledge of the valley.

Bill plans to take the children on a short holiday to his rural home, and intends to fly them there in his own plane. Unfortunately there’s a situation at the airfield, and the children inadvertently get on the wrong plane. They don’t realise this right away, and so end up hiding from their oblivious accidental pilots throughout the flight and once they land in the valley.

The children make the best home they can in their fern cave, and are able to source enough food from the men’s hut. Quite by accident Jack spots that the men have a prisoner whom he is temporarily able to free. The prisoner, Otto, is sick and doesn’t speak English well but is able to tell Jack about a “great treesure” to be found in the valley – and where to find the pass to escape. The children set off for the pass, but are understandably upset when they realise it has been blocked. To cheer themselves up they decide to hunt for the treasure using Otto’s map. Being the seasoned adventurers they are, they have little trouble finding the treasure caves though they are awed by what they find there. The poor old couple who’ve been there since time immemorial (or so it would seem) generously share their food and few comforts with the children, though Lucy-Ann is slightly confused by the old woman who thinks she is a long lost grand-daughter.

The treasure is found

The pass is blocked

Things take a dramatic turn when the men spot the boys at the entrance to the treasure caves, and lock everyone in while they start hauling off the goods. Everything suddenly starts happening at once as Philip has a fabulous idea which he swiftly puts into action, and the old couple reveal a secret passage to Jack who has a brilliant idea of his own. One of the baddies has a run-in with Jack (and a suitcase) and loses, and before long Philip has managed to alert Bill to their whereabouts so he can mount his usual rescue.

We only see one pet for Philip in this book – in the valley he picks up a small lizard whom he calls Lizzie, and Kiki starts referring to as ‘Busy Dizzy Lizzie’. Jack says she looks like a “very very small dragon”.

I love the thought of living in the fern cave, and of the tunnel that comes out behind the waterfall. I really like how the girls get their own little adventure in this book, and are instrumental in preventing the boys leading the men right to the cave. By the time the men discover the treasure caves the story has become extremely fast-paced and very, very exciting. I really like both Jack and Philip’s respective adventures towards the end of the story.

This story was published just two years after the end of World War II, although the book makes the war sound much longer ago than that. The South American baddies are in touch with the old Nazis (interestingly Nazis are rarely mentioned by name in Blyton’s books, for example in The Adventurous Four the enemies have planes featuring  a crooked cross but the name Nazi is never used) who have told them about the hidden treasures across Europe. The children figure the treasures have been stolen from churches and galleries during troubled war-times,  though Jack says the war is over long ago, and the old couple seem to have been lived so long underground they have trouble taking in news from the world outside. This is perhaps a good example of Blyton weaving a story from real and imaginary events.

We only see Mrs Mannering briefly at the start of this book. Jack and Lucy-Ann speak directly to her, and both call her Aunt Allie, and the four children are described as like one family. Bill is described as a firm friend of the children, but is either not very close to Allie yet (or is trying to impress her) as he addresses her as Mrs Mannering when he comes to ask her permission to take the children away. She calls him Bill, however.

Mrs Mannering waves to the children

Next review – The Sea of Adventure

This entry was posted in Book reviews and tagged Nazis, The Adventure Series, The Secret Mountain, The Secret of Killimooin, The Valley of Adventure, World War II. Bookmark the permalink.

3 Responses to The Valley of Adventure