Go Ahead Secret Seven – a review by Ben

A peculiar-looking George is out in the dark of night, practising his shadowing for the SecretSeven, when he is given the shock of his life and suffers a huge disappointment. Dressed up in a black overcoat, rubber shoes and holding a rubber truncheon the white-toothed black-faced George expertly follows a tall, stooping man who had just got off the bus. Suddenly a young man grabs the startled George from behind and accuses him of attempting to beat up and steal from the tall, stooping man. The angry young man forces George all the way back to his parents’ house. 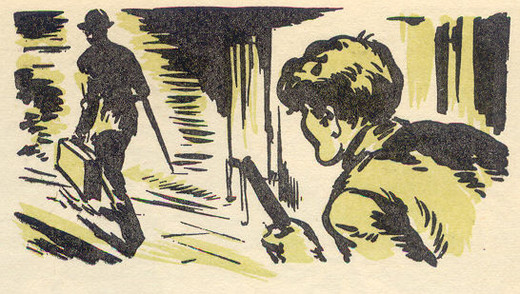 Next morning the rest of the Seven hear, much to their dismay, that George has had to resign after being banned from the society by his father. Thankfully George’s replacement is Scamper, Janet and Peter’s dog! Following on from this Colin decides to do a bit of shadowing and sees a man with a distressed-looking and whining bull terrier. Intrigued, Colin follows the man down Hartley Street and across Peter Square, where he turns into a dark alleyway and then comes back out without the dog. Meanwhile, George’s loyal friends vow revenge on the young man for getting George banned from the S.S, when Colin, Jack and Peter pay a visit to Starling’s Hotel, where he happened to be staying.

During the conversation Colin realises he had seen the same young man the night before going down the alleyway with the bull terrier. Excitedly Colin ushers the boys down to the same desolate alleyway he had seen the night before and the boys search through the rubbish for a passageway where a dog could lie. Eventually Jack and Colin tire, before finding a wooden box to sit on. The pair fight over the box and come tumbling down with it, only for the box to reveal what looks like a coal hole. 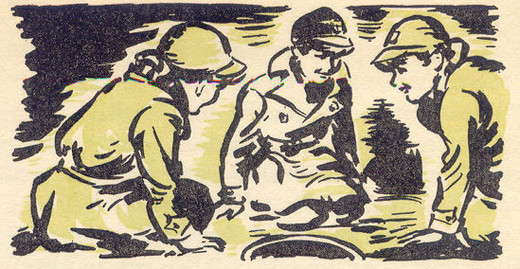 At first it looked dark and seemingly empty, but Colin decides to whistle down the hole and hears dogs barking. Realising they are on the trail of another mystery the boys also happen to stumble across the same young man walking down the alleyway with a lead, which was strange as he had no dog. This only adds to their suspicion and when Pam and Barbara visit the local library and find out that expensive dogs have been stolen from their homes, the Seven know they are on the trail of some dangerous dog thieves. Convinced they are right Jack, Colin and Peter use a rope ladder to get down the coal hole one night, and make a discovery. To their horror the boys are discovered by the caretaker and are locked up. However, there is a twist as someone is waiting to rescue the boys. Scamper hears this someone, who can it possibly be? 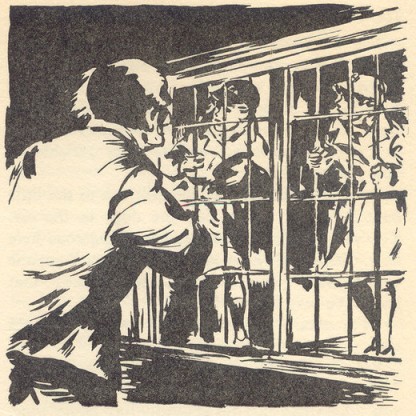 In my view, this book has a very strong message to it. Blyton once again expresses her feelings on animal cruelty. Narratively, the plot involves a number of expensive breeds of domestic dogs stolen from their owners. Jack, Colin and Peter are alarmed to think that there could be dogs in the underground coal hole, and even more shocked that they might be caged. The most telling example of Blyton’s views is when Jack describes the treatment of the dogs as “animal cruelty”, before saying that the RSPCA should be informed about the men. Personally, I think a comparison can be made with the first book, The Secret Seven, when the boys find a racehorse locked in a dark cellar. In both these books animals are kept in the dark, ready to be sold on for money.

Due to this, I find Go Ahead, Secret Seven, quite upsetting. Having said that, George being forced to leave the Secret Seven due to the beastly young man was also a moment in the book I did not enjoy. To be fair, Scamper was a great replacement and it is nice to see he plays a more prominent role in the adventure when he alerts Jack, Colin and Peter’s rescuer at the top of the coal hole, but I was really left hoping that the angry young man would be punished for how he treated George and the dogs. Overall, this book really touches my heart as a dog and animal lover, and I thank Blyton for writing such a book. Let’s hope George returns to the Secret Seven, and the dogs are returned to their owners! 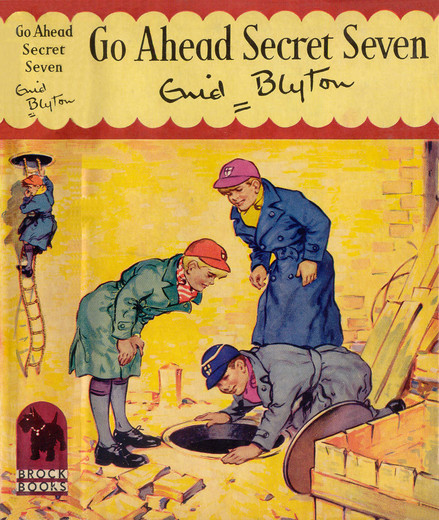 This entry was posted in Book reviews and tagged Dogs, Go Ahead Secret Seven, The Secret Seven, Written by Ben. Bookmark the permalink.