Bourne End: A May Day walk

In the glorious sunshine on May Day (May 1st) I convinced my friend Catherine to come for another Bourne End walk with me. It’s basically my spring Bourne End blog but because we haven’t had the best spring months now seemed the best time to do it, with the sunshine and the slightly cooler temperatures before the year transitioned too quickly into summer.

So I will level with you, I picked a day that makes it look like summer to do this walk, and apart from the fact that some of the trees are void of leaves and some of spring’s flowers are out, you really wouldn’t know the difference. I hope the pictures will help you understand what I mean.

However, beautiful weather, a good friend and a chance to use my camera how could I say no to this beautiful trip? 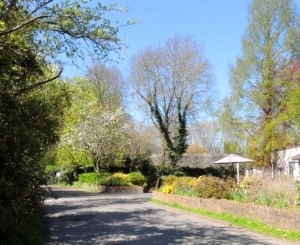 The walk from the car park, past the Spade Oak towards Old Thatch.

We arrived around 3pm, for an afternoon’s sunny walk and were not disappointed. There were lots of lovely flowers and animals about. We started at the car park, taking a look over the fences, seeing daffodils, horses with their foals, and the fishing lake through a gap in the hedge. The next item on my list was to walk a little way back down the way we had come, past the Spade Oak and past Old Thatch.

First off we decided to walk down the little footpath on the side of the road, sheltered by trees and by the field with the horses in it. Catherine and I had walked this path before, but in the opposite direction during our Autumn walk where we encountered the possible exit for the stream that was supposed to run along the back of Blyton’s garden, and the ‘yellow leaf road.’  I did manage to get a few “artistic” shots of Old Thatch’s chimney through the gap in the hedge. 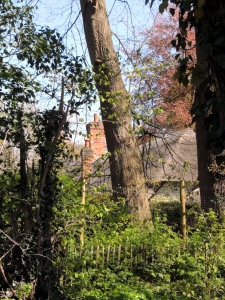 Old Thatch’s chimney through a gap in the trees on the footpath.

This time, we had no ‘yellow leaf road,’ but a tangle of brambles, catching us on the legs and needing pushing aside carefully before we could proceed. As we wandered through the undergrowth, I spotted a beautiful little chaffinch in front of me, and snapped a picture. I have been after a picture of a chaffinch for months and have been unable to secure one until May Day. See I knew it was going to be a good day! I was incredibly lucky in fact before a second after I had snapped the picture the little bird flew off. Clearly I do not have the gift that Jack Trent and Philip Mannering have with animals.

Carrying on, we walked the remainder of the footpath, up to the little bridge over the old stream bed. I had another look at where the stream may have escaped from Blyton’s garden, and then we emerged from the undergrowth, making sure first that there were no cars coming as we stepped out onto the road!

We then doubled back on ourselves, keeping to the road this time (does that count as doubling back?), so I could get some better pictures of Old Thatch. From what I could see, the garden was waiting to burst forth into bloom, but it was still nice to see the place through a gap in the hedge. I’m very much looking forward to going back and having a look soon! 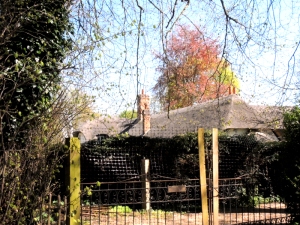 Then, photos of Old Thatch safely on my camera, we headed back to the car park and on to the riverbank.  The daffodils were shining brightly in the sun as was the blossom on the trees as we headed up to the level crossing. This time, we didn’t see a train pass, but a car had gone through before us, so we assumed that one had just gone. That didn’t mean that we didn’t observe the rule of stop, look and listen, of course. Satisfied that we weren’t walking out in front of the train, Catherine hurried across while I took a more leisurely pace! 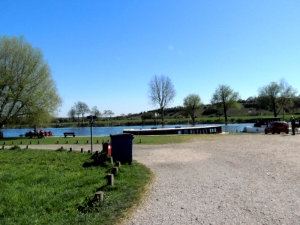 Once we were on the bank of the river, the Thames was gleaming blue under the sky and looked inviting, and I must admit that I wanted to swim in it, but I wouldn’t try it as the Thames was/is considered a very dirty river indeed.

There were a couple of boats moored at the riverside, busy with people enjoying the sun. After we’d taken in the beauty of the hills and the blue river, once again we headed up the all too familiar path, towards the marina.

Under the passage of leaves and blossom, between the riverside houses and their boat houses, we wandered along to the boat club part of the bank. I spotted a gorgeous wild rabbit with floppy ears, but I was unsuccessful in getting a picture. On our wander through we spotted a little mammal, ducking in and out of a hole between a jetty and the bank. I think it was a vole, but we couldn’t find a picture of verify this. If you do know what our little friend is, please let us know in the comments! 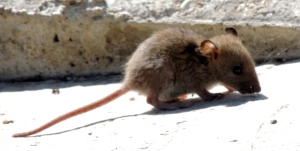 Our friend the vole?

We sat and watched the little blighter zip about for five minutes before we decided to head off again. As we reached the marina to looked up to the railway bridge and felt a strange sense of regret, as the bridge was covered with wooden planks and cloth. As we reached the bridge we saw a notice saying that they were fixing the bridge. Also not to dawdle which I did, I’m afraid. The magnificence of the bridge seemed to be diminished with men working on it, and not being able to see the train tracks on the left hand side of the footbridge. 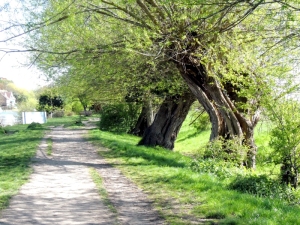 After the winter walk, where the world seemed to be monochrome it was nice to see Bourne End in such colour. We slipped under the bridge to Cock Marsh, walking across the field in the sunshine, admiring the green everywhere, and the ducks. We wandered down the bank just by the field boundary and sat in the sun for a while, admiring the view.

It was lovely to sit in the sunshine after all the time we’ve had grey skies recently, and apart from the breeze you could almost believe that it was summer.  In fact it was perfect May weather as written by Blyton usually our springs are wet and blustery while hers seem to be as perfect as the summers, never too hot, always lots of sun and minimal rain. 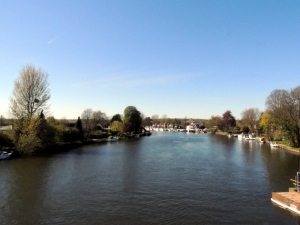 The view from the bridge

So all in all, a perfect walk. I just hope the summer weather is as good when it comes down to it!

Perfect Blyton weather as I’ve said. We came home, exhausted and sun burnt after a jolly good walk. As Old Thatch’s gardens are now open to the public on Wednesdays Thursdays and Saturdays, I will tell you that they’re worth a visit and the walk along the riverbank is always peaceful and well worth it. Give it a go! 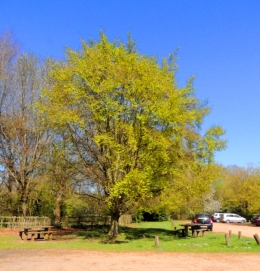 The tree in the carpark. 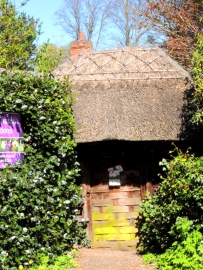 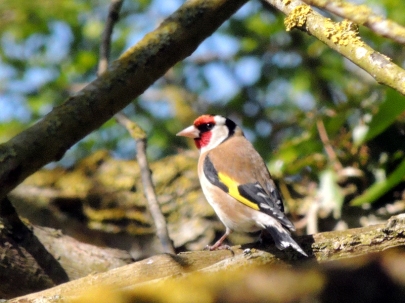 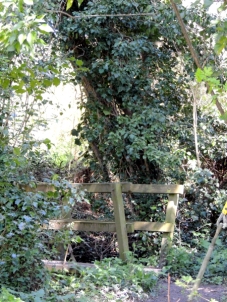 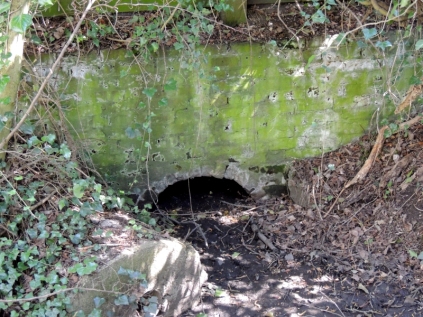 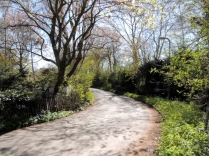 Road back down to Old Thatch 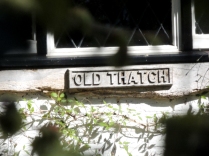 The name plate for the house 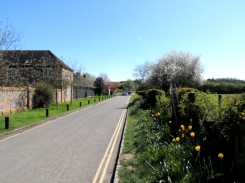 Through the level crossing 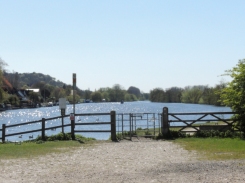 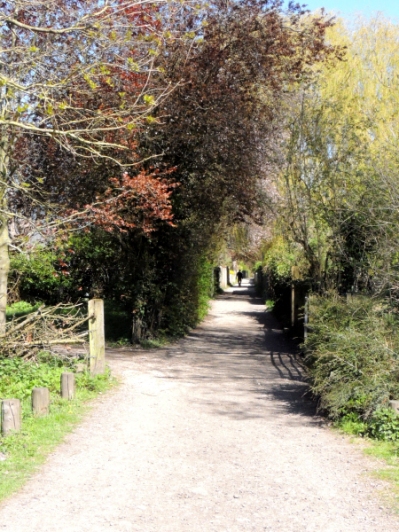 The way towards the bridge, covered over by the trees 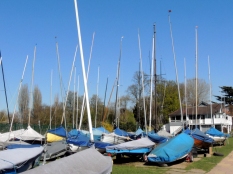 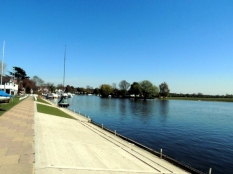 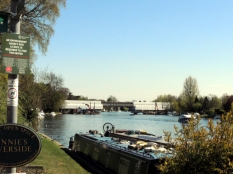 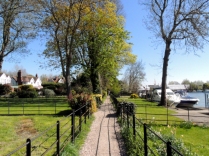 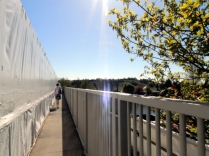 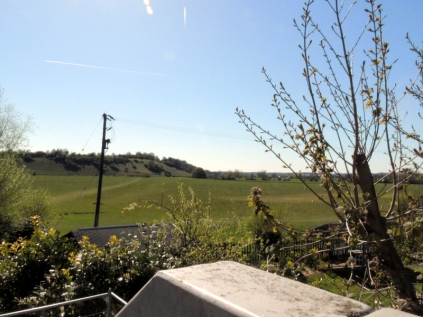 The other side of the bridge 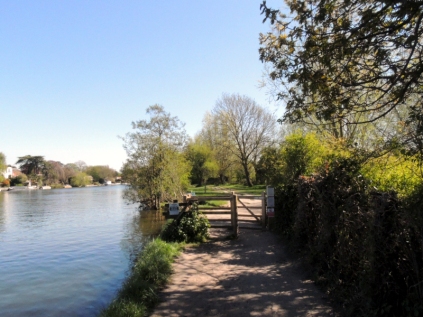 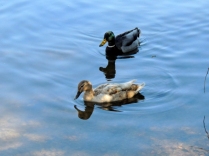 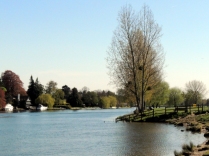 Where we sat and watched the world go by.

7 Responses to Bourne End: A May Day walk