I spent last weekend with Stef, around London and Berkshire. We spent the majority of our time doing Blyton-related activities, including a day at Bourne End on the Sunday. I’d been to Bourne end twice before – once in 2012 after the Enid Blyton day in May, and on the Friday evening of last weekend. Stef and I had gone round Old Thatch gardens in 2012 and I was eager to back last weekend as in May last year, after a horrendous winter, the gardens were a little behind in terms of growth and blooms. The garden was still wonderful, of course, but I wanted to see it in full bloom.

We had a lazy morning on Sunday, and after bacon sandwiches for breakfast we drove to Bourne End. First we took a wander through the small wooded area opposite Old Thatch, feeling like intrepid explorers as we did battle with the nettles.

The woods opposite Old Thatch

We then walked down to the river bank and along the river-path. Just like the last time I visited I imagined the Five Find-Outers walking along the path ahead of us. Unfortunately the weather was not great and it began to rain before we’d reached the railway/footpath bridge. We sheltered under the bridge for a little while, me scribbling away at a bit of fanfiction in my notebook before heading back up to the Spade Oak. We had (a rather expensive) lunch there watching the rain pour outside and then we went into Old Thatch.

The rain had thankfully stopped by then and we were welcomed into the gardens by Jacky Hawthorne. She even recognised us from our previous visit! We chatted to Jacky for a little while, and gave her one of our blog business cards. I told her I would be writing about our trip (in fact I believe I promised a glowing review!) so let’s get to it!

Old Thatch, as the name suggests, is an old thatch-roofed house. Enid Blyton lived there from 1929 to 1938, with her husband Hugh Alexander Pollock. Both Gillian and Imogen were  born while the family lived there. The house had a fair bit of history before Enid Blyton moved in, though. Already over a hundred years old, it had been a beer house, a pub and an inn where travellers could take a room. Reportedly Dick Turpin [the infamous highway robber] had stayed there on numerous occasions, putting Black Bess, his horse, in the stables. There are also tales of it being haunted by a ghostly rider, and of treasure hidden somewhere on the grounds. If you’re ever at Old Thatch you can buy a lovely little booklet Old Thatch with Enid Blyton, about the house and garden. It focusses mostly on Enid Blyton, but it also covers other aspects of the house’s history. I can also recommend  Enid Blyton at Old Thatch, by Tess Livingstone, also available to buy at Old Thatch. 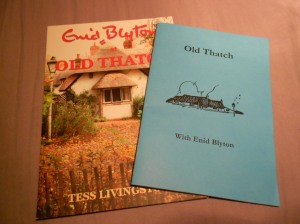 Phew! On to the gardens, now (I apologise in advance for the photo captions, where I don’t know the plant’s name I have given them obvious descriptions.)

The first part of the garden you see is the Entrance Garden. It is a riot of colour, completely wild-looking and utterly beautiful. I couldn’t tell you what many of the flowers are called, but my favourites were the purple ones with the star-shaped blooms. The fox gloves were also lovely, in purples, pinks and cream – I love looking at the ‘fairy footsteps’ inside the bell shaped flowers. There were hundreds of bees buzzing around enjoying the flowers too.

the entrance garden and Old Thatch

a bee enjoying the flowers

Rain on the leaves

The Entrance Garden in May 2012

The next garden is the Formal Garden, and it runs along the side of the house down to the ‘front door’. (I say ‘front door’ as when Blyton lived there, it had two ‘front doors’, the one by the formal garden was at the back of the house, while the one at the front led into the dining room.) The formal garden leads down to the Lavender Terrace, a round, stone-patio area from which you can see the Water Garden, down the rose pergola and up the Formal Garden.

The Formal Garden looking towards the Water Garden

From here you have a choice of routes, both times we have roughly followed the numbers on the little map-guide, which takes you along the rose pergola (called the Rose & Clematis Walk). We walked along the side of the pergola, stopping to take lots more photographs of the roses and a multitude of other flowers. I particularly liked what I’ve been referring to as pink thistles.

The rose and clematis walk 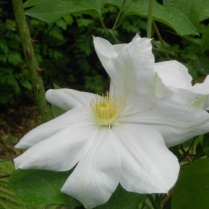 A white flower I don’t know the name of! 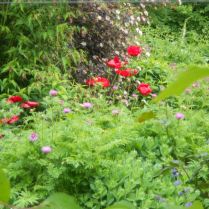 On the other side of the pergola

The next garden we visited was Mr Aplin’s a wide, open garden with a large lawn, several places to sit and lots of lovely flowers and  plants in neat flower beds. Mr Aplin’s leads to Lane Garden, which has a bench which is perfectly curved to compliment the round patio. Behind the Lane Garden is the old stream bed.

From there we retraced our steps back to the rose pergola, and we went through what I think was called the Illusion Garden where things are not quite as they seem.

Not what it may seem.

That brought us round to the Circle Garden, which aptly, is circular, and then on to one of my favourite parts of the garden, the Water Garden. I could sit by the fountain all day if I had the chance. We took a lot of pictures of the fountain between us, and I made friends with a dragonfly who was very content to sit on my finger while Stef took photos of it. 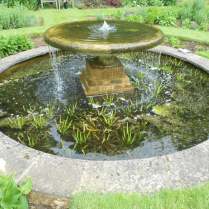 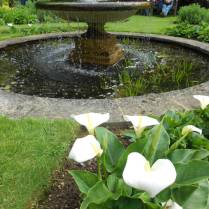 Flowers by the fountain

From the Water Garden we walked into the Pencil Garden. At one end are three massive pencils, and down the middle is a wavy bed of (I think) begonias, in colours which match the pencils. On the sign it says only children can understand the significance of the garden. Being a Blyton Fan, and thus not having ever properly grown-up I think I have an idea what the garden means, but I won’t tell you what that is!

After the mysterious Pencil Garden we moved on to another of my favourite parts – the Cottage Garden. This is another slightly wild area with narrow paths, and the other front door to the house. It also has a gorgeous overgrown well and the pond made by Blyton herself. If you’re so inclined you can have tea and cakes here, but we didn’t stop as we weren’t finished exploring yet! 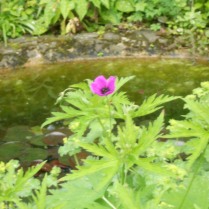 Flower by the pond

We went back to the Lavender Terrace and had planned to walk down the middle of the rose pergola (taking photos all the way, of course). Unfortunately a coach-load of Japanese tourists had just arrived and they got rather in our way! We waited a little while, not feeling particularly rushed, and we had a luck break when the tourists all wandered off in different directions leaving us the pergola all to ourselves.

Stef in the rose pergola

A tourist in the rose pergola 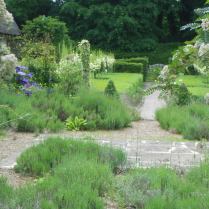 The lavender terrace looking towards the formal garden

Finally, we returned to the Circular Garden (all the Water Garden benches were full), and we did a bit more fan fiction writing and enjoyed the sun which was finally beginning to emerge from the clouds.

Eventually we thought we’d better get going, so we headed back out to say bye to Jacky. We bought a few booklets and postcards, and then ended up having a lovely chat with Jacky for at least three-quarters of an hour. We left well after the garden was supposed to close!

After ducking through the old lychgate we wandered back down to the river and sat for hours, talking and watched the world go by. We saw lot of birds on the river as well as people in various kinds of boats, some powered by paddles! 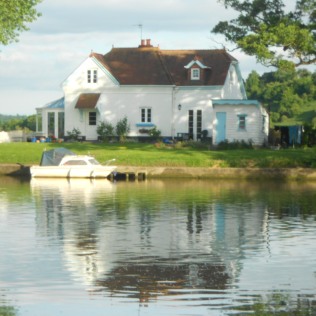 The house across the river

All in all it was a lovely day, and the rain didn’t spoil our time at all.

I’m not sure what it is that makes me love Old Thatch so much. Obviously I visit for the Blyton connection. You can just imagine her sitting outside tapping away at her typewriter, and it’s lovely to see the features that were there in her time at Old Thatch (the pond, the pergola and the lion’s head door knocker.) However, I think I’d still enjoy them without that. They’re incredibly peaceful and despite not being someone who believes in anything even remotely spiritual, both visits to Old Thatch have left me feeling better inside. It’s hard to explain, but after just sitting relaxing in the garden I’ve had a feeling of inner peace.

If you’re ever in the Bourne End area, you must, must go see the gardens. They are open until August the 29th this year on Wednesdays, Thursdays and Sundays from 2 till 5.30, and you can see the details on the Old Thatch website. [Gardens are now closed as of 2015]

A map of the gardens

I’d like to thank Jacky for her warm welcome and her interest in the blog. I’ll be emailing her the link to this post, so perhaps she’ll be able to tell us the names of some of the flowers! Thanks also go to Stef for letting me stay with her all weekend and driving me  around!

I apologise for the number of photos in this blog, I took at least 200 at Old Thatch, so these are genuinely just a small proportion of them! I’m just going to stick a few more at the end of the post as they didn’t fit into the story but I wanted to include them anyway. 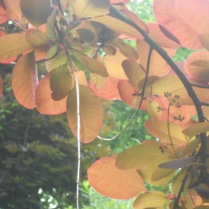 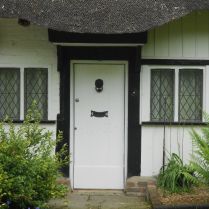 The front door around the back.

This entry was posted in Personal Experiences and tagged Bourne End, Old Thatch. Bookmark the permalink.