Author’s note: I’m sorry not to be able to bring you a blog from our fabulous Blyton weekend as promised on Monday, but I’ve been so busy I haven’t had time to write it, and certainly not well. So here’s one I prepared earlier. The Famous Five. On TV. About time, I hear you say!

“We are the Famous Five…”

A while ago I wrote a blog telling you all that I planned to review the Famous Five TV series from the 1970s and 1990s and compare the episodes to the original books by Enid Blyton. Needless to say I think I’ve kept you waiting long enough!

In that case: Let’s DO this!

As mentioned in the last blog there is no 70s episode for Five on a Treasure Island or Five have a Mystery to Solve as the copyright was still held by the Children’s Film Foundation (CFF) after their weekly episodes for the cinemas. In both those cases I will be comparing the CFF programmes to the 90s series episodes and the books.

For this blog I shall compare some key points from the book to the same points in the 1990s episode and the CFF film, but shall touch on the first meeting of the cousins from the 1970s series to see how they all compare.

In the book we start at the dining table of Julian, Dick and Anne’s parents (for the sake of this post, known as Mr and Mrs Kirrin) with Julian asking his parents whether they are going to Polseath for their holidays once more. As we know they are unable to go to Polseath because the place they usually stay at is full up.

When we look at the beginnings of all filmed versions of Five on a Treasure Island, we can see that none of them start with the dining table scene. In the CFF version, filmed in 1957 (with Blyton’s own input), we see George on her own walking down a street – one can only assume that its Kirrin Village high street – where she first discovers Timmy. We receive no word about her cousins arriving until much later on. They arrive without their parents and appear to have come by train or bus.

In the 90s version, we are treated to a glorious stormy scene where we see a ship crash on the rocks of Kirrin Island. After this dramatic little scene we are brought to Kirrin Island with George and Timmy watching the birds. Then they head back across to the mainland, only to have Timmy told off for barking. Aunt Fanny then reminds George that her cousins are coming to stay and George says it’s awful.

In the 70s series even though the episode isn’t Five on a Treasure Island, a similar beginning to the other two can be seen. The cousins aren’t introduced until you’ve heard Aunt Fanny telling George that her cousins are coming to stay! Julian, Dick and Anne are seen to be cycling to Kirrin – from the station I presume – again without any parental intervention. In fact the only series where we see Julian, Dick and Anne’s parents is the 90s series, where they drive their children to Kirrin and meet with Uncle Quentin and Aunt Fanny.

Certain aspects of the original have been changed as you can see from the beginning. All these ways work with the rest of the filmed episodes. They all set the scene for what is to come next: as George’s reaction to the arrival of her cousins is possibly more visually pleasing and fits in better with the story, to see George’s reaction to the news that she has to share her house with her cousins instead of the written beginning where for Julian, Dick and Anne, the fact that they are going somewhere different is part of the great adventure.

Timmy a.k.a Connal from the 90s TV series.

In the book, Timmy is not introduced until chapter three, when the children are chatting on the beach and George runs off to fetch him. The 90s series best depicts this part of the story, but we are treated to the scene where Quentin bans him from the house before being too loud at the beginning of the episode. Timmy is collected from Alf the fisher and the children wonder about who exactly Tim is.

In the CFF version, Timmy is adopted by George on the day that her cousins are due to arrive and banned by Uncle Quentin on the same day. George picks Tim up after he chased something into an antique store and damaged some valuable pieces. He is introduced to George’s cousins when they head down to the beach after their lunch, when George fetches him from Alf’s fishing shed.

Timmy a.k.a Toddy Woodgate from the 70s TV series.

The discovery of Timmy is the least similar to the book in the 70s episode. The five are not friends as quickly as they are in the book or the other two series, and consequently Timmy discovers Julian, Dick and Anne before George even starts to like the others.

The handling of introducing Timmy to the other children is handled best in the 90s episodes, because it feels most like the book, even if you discount the fact that you had seen Timmy banned from the house earlier that day. Although the CFF 50s Five on a Treasure Island is just as good at introducing Timmy, there is a slight lack of something in the scene where George fetches Timmy. The dynamic isn’t the same between the siblings and George for this scene to flow properly. There is still a certain amount of distrust from George’s side which doesn’t make it feel right somehow.

This is where we have to leave the 70s episode behind because the first episode for this series is in reality Five on Kirrin Island Again.

In the CFF version we have the introduction of a naval officer who is working alongside Uncle Quentin on the development of a new ship called The Gay Viking  a super fast and sleek ship full of special top secret tricks.  There are a few subtle changes to the plot line but nothing too major.

By on large the 50s film version was very close to the book; possibly down to Blyton’s own influence on the production.

Its a fast paced adaptation as the episodes are approximately ten minutes long, and with each episode there is a recap on what happened last time because there would have been at least a week between the cinemas airing the episodes.

One point about the CFF series I would like to make is that Dick appears significantly  younger than Julian, more like two years instead of the one year specified in the books and when he is retrieving the gold from the cellars  to trick the bad guys, he talks to himself. Rather an odd concept if you ask me.  Another point is that Aunt Fanny becomes Aunt Margaret  this may be perhaps because the name Fanny was already going out of fashion. I do not know, but someone else may know the answer – so if you do, please feel free to let us know!

With the exception of the Gay Viking, the discovery of the map and George finding Timmy on the very day her cousins are supposed to arrive, the CFF series keeps very well to the book. The baddies are well characterised and are believably nasty.

As for the 90s TV series (and I’ll try not to be biased), we are treated to an accurate portrayal of the book and even the luxury of two 25 minute episodes. There are a couple of points that need to be considered, such as George asking Alf the fisher boy to look after Timmy on the day her cousins arrive, and there is no diving down to the wreck for Julian – again, I have no answers for that. The baddies however are a comic sort (My mother recently compared them to Laurel and Hardy), over the top and one is very clumsy, you get the sense that they are not so much well-versed conmen but a pair of greedy inexperienced men. Also, in the case of disabling the bad guys’ boat, Dick takes control of that instead of George, and Julian is left down in the dungeons to shut the men in. 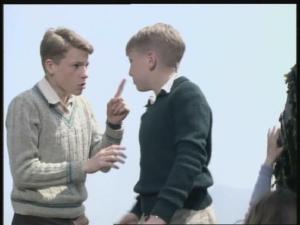 Julian (Marco Williamson) and Dick (Paul Child) having some brotherly banter. A large part of this relationship makes the series so enjoyable!

Overall the plot is very close to the book, and for any Famous Five fan, a thrilling adventure. The points I have pick up on both of these adaptations are simply my nit picking I believe, but if I didn’t then you probably wouldn’t have an article to read.

Something else that I should mention is that, in the 90s version we have a lot more “banter” between Julian and Dick, they play off each other more – more like I would imagine from brothers. In fact in something from one of the producers I have read that the picked Marco Williamson and Paul Child to play Julian and Dick because they had good brotherly chemistry and (Paul) Child was always to take the lead from (Marco) Williamson just like Dick tries to do in the books.

As far as Five on a Treasure Island goes in the eyes of CFF’s 1950s  and Zenith’s 1990s productions are a success. The largely keep to the plot with only a few little niggly pieces that I happened to pick up on.

In which case – well done to those production teams, and on we go to the next adventure, Five Go Adventuring Again.

7 Responses to TV Series Comparison: Five on a Treasure Island